The Air Craft of Clément Ader

From Aërial Navigation: a Popular Treatise on the Growth of Air Craft (1911)

[The problem of powering flight was solved with the internal combustion engine. Before that era was possible, in his experimental aircraft, Clément Ader used what was available—steam power. With a design inspired by bat wings, his machines were impractical, but however briefly he left the ground, Ader can claim to have made the first manned, powered flight in 1890.  Thirteen years would pass before the first controlled, powered flight by the Wright Brothers. ]

[With his] great man-carrying bird of Clément Ader [was] one of the most prominent and successful aviators of that active period. If the reports be true, Ader may justly claim to be the first person to navigate the air in a dynamic flying machine. However, it must be observed that his achievements did not at first arouse in France a great pitch of exultation and enthusiasm. There seemed at the time to be some skepticism as to the practicability of his device. But later cordial reparation was made by placing it on the Stand of Honor at the Aeronautical Salon, held in the Grand Palais, at Paris, in December, 1908.

Clément Ader set out in life with the fixed determination to make a fortune, then to build a practical flying machine. Adopting the profession of electrical engineer, he quickly accumulated enough capital, as he thought, to realize his early ambition. He next visited Africa to study at close range the great soaring birds that Mouillard had described with so much admiration and vivacity. Going to Algeria he disguised himself as an Arab, and, with two Arab guides, journeyed to the interior where he watched the great soaring vultures, which he enticed with bits of meat to perform before him their marvelous maneuvers, wheeling in wide circles, and without wing beat, from earth to sky. 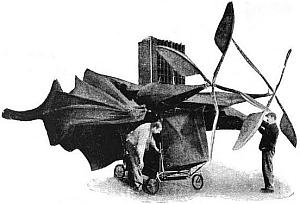 After several years of study of the anatomy and flight of birds, Ader began, at the age of forty-two years, to construct an aeroplane. His first machine was a birdlike monoplane mounted on skids, or wheels, and driven by a 40-horse-power steam engine actuating a screw, placed forward. The total weight was 1,100 pounds, the spread 46 feet, the length 21 feet. The Eole, as he called it, received its first open-air test on the morning of October 9, 1890, in the grounds surrounding the Chateau d'Armainvilliers, near Gretz, a portion of the course being so prepared that the trace of the wheels would be visible. When everything was ready for the trial, Ader mounted the machine, in presence of a few friends, ran quickly over the ground, urged by the propeller thrust, then rose into the air and sailed 150 feet. Such is the report of the witnesses to what is claimed as the first flight of a human being in a power-driven flying machine.

Subsequently this bold inventor built Eole No. 2, which, by special permission of the War Department, he tested on a prepared track, 2,400 feet long, on the Satory Camp. Over this course he ran his machine several times, and on one occasion flew 300 feet; but on alighting broke one of the wings.

Ader, now having spent one and a half million francs on his experiments, placed the Eole on exhibition in order to raise money for their continuation. In this venture also he was successful, being presently subventioned by the French War Department to build an aeroplane for its use. His subsequent labors are concisely set forth in Automobilia and Flight for February, 1909, as follows:

“Under these new conditions the workshop in the Rue Pajou was abandoned for larger premises in the Rue Jasmin, where the construction of the Avion was commenced in May, 1892, all persons engaged with the construction being under a military vow of secrecy. The motor was built first, and tested before a commission composed of army officers and some of the leading technicians of France. It was found to develop 30 horse power for a total weight of 32 kilogrammes; and even now, though seventeen years old, is regarded as a chef d'oeuvre. In the spring of 1897 the Avion was ready to make flights. Like its predecessors it was modeled on the form of a bat; but, although the wings could not be flapped, they could be folded, and could be advanced or retarded horizontally.

“Everything appearing satisfactory, Ader informed the military commission that he was ready to undergo tests; the committee met at the workshops in the Rue Jasmin on August 18, 1897; were pleased with the machine, and ordered flights to be made immediately at Satory. It was not, however, until October 12th that a flight was attempted on the carefully guarded military ground, and in the presence of General Mesnier. The apparatus covered a distance of 1,600 yards, and although it did not fly, for this distance it is certain that on several occasions it completely left the ground. Ader declared that according to whether the wings were carried forward or to the rear, it was the front or the rear wheels only which left the ground. The pressure in the generator at this moment varied between 3 and 4 atmospheres. On increasing it to 6 or 7 atmospheres none of the wheels touched.

“Satisfied with the results of the test, General Mesnier called the commission together for further trials on the following day, October 14, 1897. Unfortunately it was a rough, squally morning, that would have prevented many a modern aviator from bringing a machine into the open.. But as the officers had been brought together specially for this purpose, a flight was attempted.

“‘After several revolutions of the propellers, and a few yards covered at a moderate speed, we were off at a high rate of travel,’ wrote Ader, who was at the wheel on this memorable occasion. ‘The pressure was about 7 atmospheres. Almost immediately the vibrations of the rear wheel ceased, and, directly after, those of the front wheels were no longer felt, showing that we had entirely left the ground. Unfortunately the wind had increased in strength, and I had some difficulty in keeping to the line that had been marked out. I increased the pressure to 9 atmospheres, and immediately the speed increased considerably, the vibrations ceased again, showing that we had once more left the ground. Under the influence of the wind the aeroplane had a constant tendency to drift to the right, away from the circular track that had been marked for it. Finally, with the wind broadside on, the machine was in a rather dangerous position, for it was being still more rapidly driven out of its course. I increased the pressure still more and put the rudder hard over to the left, with the result that for a few seconds the machine worked back towards the track and still maintained itself in the air. But it was impossible to struggle against the wind, and finding that the machine was being carried towards some artillery sheds, and somewhat unnerved by the speed at which the ground appeared to be rushing past, I stopped the engine; there was a shock, and I was on the ground.’

“Ader was uninjured, but his machine was rather badly smashed. It had certainly flown, but with such difficulty in the face of the wind that the army commission was evidently little inclined to report favorably upon it. Several weeks passed without any communication being received from the War Department; then it became apparent to Ader that the Government had no longer faith in his invention. This was proved early in the following year by an official communication to the effect that no further funds could be allotted to this work. Discouraged at the abandonment after forty years’ labor and the expenditure of about two million francs, Ader commenced the destruction of his machines. The earlier ones were destroyed, but the Avion, the one which had appeared before the army commission, was saved and sent to the Museum of the Arts et Metiers in Paris.”

The last aeroplane, or Avion, weighed 1,100 pounds, spread 270 square feet, and was driven by a 40-horse-power steam engine actuating twin screws projecting before the bird-shaped flyer. The engine weighed but 7 pounds per horse power—quite a remarkable achievement for that day.