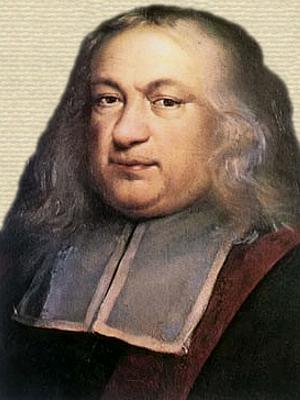 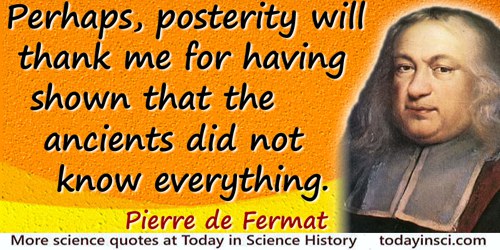 Read more about this quote

Introduction aux Lieux Plans et Solides (1679) collected in OEuvres de Fermat (1896), Vol. 3, 85. Introduction to Plane and Solid Loci, as translated by Joseph Seidlin in David E. Smith(ed.)A Source Book in Mathematics (1959), 389. Alternate translation using Google Translate: Whenever in a final equation there are two unknown quantities, there is a locus, the end of one of them describing a straight line or curve. The line is simple and unique in its kind, species curves are indefinite in number,circle, parabola, hyperbola, ellipse, etc.

[Et peut-être la posterité me saura gré de lui avoir fait connaître que les Anciens nont pas tout su.]
And perhaps, posterity will thank me for having shown that the ancients did not know everything.

To divide a cube into two other cubes, a fourth power, or in general any power whatever into two powers of the same denomination above the second is impossible, and I have assuredly found an admirable proof of this, but the margin is too narrow to contain it.

His handwritten note in the margin, beside the eighth proposition, in his copy of Diophantus' Arithmetica, Book 2. It is known as Fermats Last Theorem. (A proof remained elusive until 1994.) In Précis des Oeuvres Mathématiques de P. Fermat et de l'Arithmetique de Diophante (1853), 53-54. As translated by Vera Sandford in David Eugene Smith, A Source Book in Mathematics (1929), 212.


Quotes by others about Pierre de Fermat (12)


I confess that Fermats Theorem as an isolated proposition has very little interest for me, for a multitude of such theorems can easily be set up, which one could neither prove nor disprove. But I have been stimulated by it to bring our again several old ideas for a great extension of the theory of numbers. Of course, this theory belongs to the things where one cannot predict to what extent one will succeed in reaching obscurely hovering distant goals. A happy star must also rule, and my situation and so manifold distracting affairs of course do not permit me to pursue such meditations as in the happy years 1796-1798 when I created the principal topics of my Disquisitiones arithmeticae. But I am convinced that if good fortune should do more than I expect, and make me successful in some advances in that theory, even the Fermat theorem will appear in it only as one of the least interesting corollaries.
In reply to Olbers' attempt in 1816 to entice him to work on Fermat's Theorem. The hope Gauss expressed for his success was never realised.

I carried this problem around in my head basically the whole time. I would wake up with it first thing in the morning, I would be thinking about it all day, and I would be thinking about it when I went to sleep. Without distraction I would have the same thing going round and round in my mind.
Recalling the degree of focus and determination that eventually yielded the proof of Fermat's Last Theorem.

Foreshadowings of the principles and even of the language of [the infinitesimal] calculus can be found in the writings of Napier, Kepler, Cavalieri, Pascal, Fermat, Wallis, and Barrow. It was Newton's good luck to come at a time when everything was ripe for the discovery, and his ability enabled him to construct almost at once a complete calculus.

Some mathematics problems look simple, and you try them for a year or so, and then you try them for a hundred years, and it turns out that they're extremely hard to solve. There's no reason why these problems shouldn't be easy, and yet they turn out to be extremely intricate. [Fermat's] Last Theorem is the most beautiful example of this.

From interview for PBS website on the NOVA program, 'The Proof'.

[About Pierre de Fermat] It cannot be denied that he has had many exceptional ideas, and that he is a highly intelligent man. For my part, however, I have always been taught to take a broad overview of things, in order to be able to deduce from them general rules, which might be applicable elsewhere.

I have found a wonderful solution to Fermats Last Theorembut my train is leaving.

Graffiti on wall of subway, New York. As quoted in William Reville, 'The Science of Writing a Good Joke', The Irish Times (5 Jun 2000).

I confess that Fermats Theorem as an isolated proposition has very little interest for me, because I could easily lay down a multitude of such propositions, which one could neither prove nor dispose of.

Mssr. Fermatwhat have you done?
Your simple conjecture has everyone
Churning out proofs,
Which are nothing but goofs!
Could it be that your statements an erudite spoof?
A marginal hoax
That youve played on us folks?
But then youre really not known for your practical jokes.
Or is it then true
That you knew what to do
When n was an integer greater than two?
Oh then why cant we find
That same proofare we blind?
You must be reproved, for Im losing my mind.

When students hear the story of Andrew J. Wiles proof of Fermats Last Theorem, it is not the result itself that stirs their emotions, but the revelation that a mathematician was driven by the same passion as any creative artist.

In 'Loving Math Infinitely', The Chronicle of Higher Education (19 Jan 2001).

One striking peculiarity of mathematics is its unlimited power of evolving examples and problems. A student may read a book of Euclid, or a few chapters of Algebra, and within that limited range of knowledge it is possible to set him exercises as real and as interesting as the propositions themselves which he has studied; deductions which might have pleased the Greek geometers, and algebraic propositions which Pascal and Fermat would not have disdained to investigate.

Q: Why did the chicken cross the road?
A: Pierre de Fermat: I just dont have room here to give the full explanation.

[Note: Pierre de Fermat is famous for an enigmatic marginal note in his notebook, I have discovered a truly remarkable proof which this margin is too small to contain.]