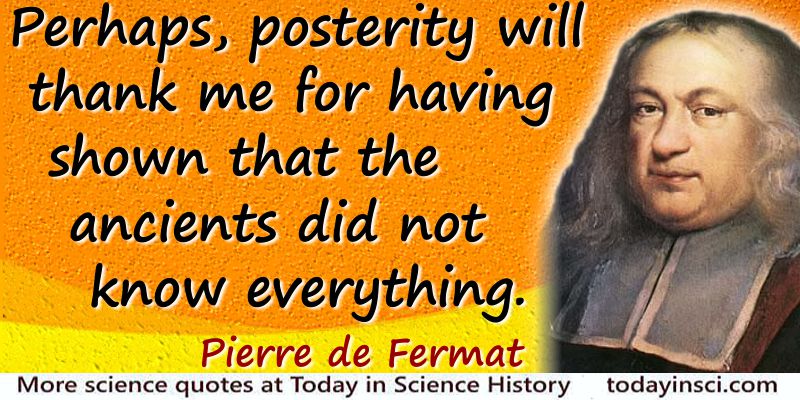 “Perhaps, posterity will thank me for having shown that the ancients did not know everything.”
— Pierre de Fermat
In letter (Aug 1659) to Pierre de Carcavi.

In Aug 1659, a few years before he died, Pierre de Fermat wrote a letter to Pierre de Carcavi, titled “Relation des Nouvelles Découvertes en la Science des Nombres” (Account of New Discoveries in the Science of Numbers), which he ended with this thought about his mathematical endeavour:

Translated from its original French, we recognize it as the familiar quotation:

“And perhaps, posterity will thank me for having shown that the ancients did not know everything,…”

In his letter, Fermat continued this final sentence, writing:

Assisted by Google, Webmaster translates this roughly as:

…and this account will reach the minds of those who come after me for traditio lampadis ad filios as saith the great English Chancellor, with the sentiment and the motto which I will add:

The first quote in Latin, traditio lampadis ad filios (Delivery of the Lamp to the Sons) was written by Sir Francis Bacon, Lord Chancellor of England, when describing the transfer of knowledge, (seen as a title in Bacon’s Sixth Book of the 1623 “De Augmentis,” discussing delivery of secret knowledge).

The second quote in Latin is also from Bacon, who adapted this quotation as his own from the Book of Daniel (12:4) in the Latin Vulgate. The motto is featured in the title page engraving for Bacon's Instauratio Magna, (1620). It can be translated as “Many pass to and fro, and knowledge is increased.”