[About Pierre de Fermat] It cannot be denied that he has had many exceptional ideas, and that he is a highly intelligent man. For my part, however, I have always been taught to take a broad overview of things, in order to be able to deduce from them general rules, which might be applicable elsewhere.

A short, broad man of tremendous vitality, the physical type of Hereward, the last of the English, and his brother-in-arms, Winter, Sylvesters capacious head was ever lost in the highest cloud-lands of pure mathematics. Often in the dead of night he would get his favorite pupil, that he might communicate the very last product of his creative thought. Everything he saw suggested to him something new in the higher algebra. This transmutation of everything into new mathematics was a revelation to those who knew him intimately. They began to do it themselves. His ease and fertility of invention proved a constant encouragement, while his contempt for provincial stupidities, such as the American hieroglyphics for π and e, which have even found their way into Websters Dictionary, made each young worker apply to himself the strictest tests.

Among the minor, yet striking characteristics of mathematics, may be mentioned the fleshless and skeletal build of its propositions; the peculiar difficulty, complication, and stress of its reasonings; the perfect exactitude of its results; their broad universality; their practical infallibility.

Each species has evolved a special set of solutions to the general problems that all organisms must face. By the fact of its existence, a species demonstrates that its members are able to carry out adequately a series of general functions.  These general functions offer a framework within which one can integrate ones view of biology and focus ones research. Such a view helps one to avoid becoming lost in a morass of unstructured detaileven though the ways in which different species perform these functions may differ widely. A few obvious examples will suffice. Organisms must remain functionally integrated. They must obtain materials from their environments, and process and release energy from these materials.  They must differentiate and grow, and they must reproduce. By focusing ones questions on one or another of these obligatory and universal capacities, one can ensure that ones research will not be trivial and that it will have some chance of achieving broad general applicability.

Every serious scientific worker is painfully conscious of this involuntary relegation to an ever-narrowing sphere of knowledge, which threatens to deprive the investigator of his broad horizon and degrades him to the level of a mechanic.

I am a great believer in the simplicity of things and as you probably know I am inclined to hang on to broad & simple ideas like grim death until evidence is too strong for my tenacity.

I do not think that, practically or morally, we can defend a policy of saving every distinctive local population of organisms. I can cite a good rationale for the preservation of species, for each species is a unique and separate natural object that, once lost, can never be reconstituted. But subspecies are distinctive local populations of species with broader geographic range. Subspecies are dynamic, interbreedable, and constantly changing: what then are we saving by declaring them all inviolate?

I recognize that many physicists are smarter than I ammost of them theoretical physicists. A lot of smart people have gone into theoretical physics, therefore the field is extremely competitive. I console myself with the thought that although they may be smarter and may be deeper thinkers than I am, I have broader interests than they have.

It has been proposed (in despair) to define mathematics as what mathematicians do. Only such a broad definition, it was felt, would cover all the things that might become embodied in mathematics; for mathematicians today attack many problems not regarded as mathematics in the past, and what they will do in the future there is no saying.

It is the intact and functioning organism on which natural selection operates. Organisms are therefore the central element of concern to the biologist who aspires to a broad and integrated understanding of biology. 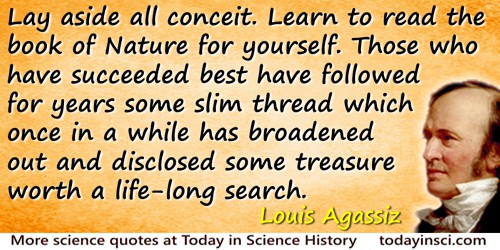 Mathematics is of two kinds, Rigorous and Physical. The former is Narrow: the latter Bold and Broad. To have to stop to formulate rigorous demonstrations would put a stop to most physico-mathematical inquiries. Am I to refuse to eat because I do not fully understand the mechanism of digestion?

As quoted by Charles Melbourne Focken in Dimensional Methods and Their Applications (1953), 17.

No collateral science had profited so much by palæontology as that which teaches the structure and mode of formation of the earths crust, with the relative position, time, and order of formation of its constituent stratified and unstratified parts. Geology has left her old hand-maiden mineralogy to rest almost wholly on the broad shoulders of her young and vigorous offspring, the science of organic remains.

No one should feel at all offended or threatened by the obvious fact that we are not all born entirely blank, or entirely the same, in our mixture of the broad behavioral propensities defining what we call temperament. 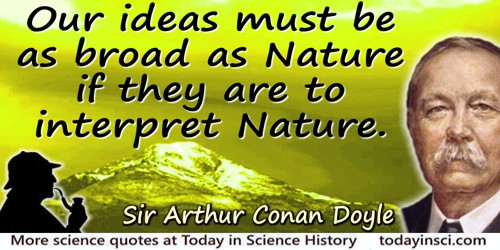 Ones ideas must be as broad as Nature if they are to interpret Nature.

Reaching the Moon by three-man vessels in one long bound from Earth is like casting a thin thread across space. The main effort, in the coming decades, will be to strengthen this thread; to make it a cord, a cable, and, finally, a broad highway.

Science goes from question to question; big questions, and little, tentative answers. The questions as they age grow ever broader, the answers are seen to be more limited.

Science is advancing faster than ever, and on a broader front.

Scientists come in two varieties, hedgehogs and foxes. I borrow this terminology from Isaiah Berlin (1953), who borrowed it from the ancient Greek poet Archilochus. Archilochus told us that foxes know many tricks, hedgehogs only one. Foxes are broad, hedgehogs are deep. Foxes are interested in everything and move easily from one problem to another. Hedgehogs are only interested in a few problems that they consider fundamental, and stick with the same problems for years or decades. Most of the great discoveries are made by hedgehogs, most of the little discoveries by foxes. Science needs both hedgehogs and foxes for its healthy growth, hedgehogs to dig deep into the nature of things, foxes to explore the complicated details of our marvelous universe. Albert Einstein and Edwin Hubble were hedgehogs. Charley Townes, who invented the laser, and Enrico Fermi, who built the first nuclear reactor in Chicago, were foxes.

In 'The Future of Biotechnology', A Many-Colored Glass: Reflections on the Place of Life in the Universe (2007), 1.

So why fret and care that the actual version of the destined deed was done by an upper class English gentleman who had circumnavigated the globe as a vigorous youth, lost his dearest daughter and his waning faith at the same time, wrote the greatest treatise ever composed on the taxonomy of barnacles, and eventually grew a white beard, lived as a country squire just south of London, and never again traveled far enough even to cross the English Channel? We care for the same reason that we love okapis, delight in the fossil evidence of trilobites, and mourn the passage of the dodo. We care because the broad events that had to happen, happened to happen in a certain particular way. And something unspeakably holy I dont know how else to say thisunderlies our discovery and confirmation of the actual details that made our world and also, in realms of contingency, assured the minutiae of its construction in the manner we know, and not in any one of a trillion other ways, nearly all of which would not have included the evolution of a scribe to record the beauty, the cruelty, the fascination, and the mystery.

The calculus is the greatest aid we have to the appreciation of physical truth in the broadest sense of the word.

When two minds of a high order, interested in kindred subjects, come together, their conversation is chiefly remarkable for the summariness of its allusions and the rapidity of its transitions. Before one of them is half through a sentence the other knows his meaning and replies. ... His mental lungs breathe more deeply, in an atmosphere more broad and vast...

You cannot do without one specialty. You must have some base-line to measure the work and attainments of others. For a general view of the subject, study the history of the sciences. Broad knowledge of all Nature has been the possession of no naturalist except Humboldt, and general relations constituted his specialty.

[Edward Teller is a conceptual thinker,] an order of magnitude man. Thats his language. Hes like the architect who likes to make the big drawing, the broad sketch, and not worry himself about the plumbing details.