Dermatology is the best specialty. The patient never dies and never gets well.

J. Dantith and A. Isaacs, Medical Quotes: A Thematic Dictionary (1989) 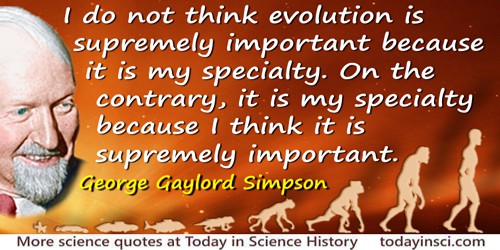 It is not enough to teach man a specialty. Through it he may become a kind of useful machine, but not a harmoniously developed personality. It is essential that the student acquire an understanding of and a lively feeling for values. He must acquire a vivid sense of the beautiful and of the morally good. Otherwise hewith his specialized knowledgemore closely resembles a well-trained dog than a harmoniously developed person.

Science itself is badly in need of integration and unification. The tendency is more and more the other way ... Only the graduate student, poor beast of burden that he is, can be expected to know a little of each. As the number of physicists increases, each specialty becomes more self-sustaining and self-contained. Such Balkanization carries physics, and indeed, every science further away, from natural philosophy, which, intellectually, is the meaning and goal of science.

Science would be ruined if (like sports) it were to put competition above everything else, and if it were to clarify the rules of competition by withdrawing entirely into narrowly defined specialties. The rare scholars who are nomads-by-choice are essential to the intellectual welfare of the settled disciplines.

Appended to his entry in Whos Who. In Alan Lindsay Mackay, A Dictionary of Scientific Quotations (1991), 163.

Specialists never contribute anything to their specialty; Helmholtz wasnt an eye-specialist, but a German army doctor who invented the ophthalmoscope one Saturday afternoon when there wasnt anything else to do. Incidentally, he rewrote whole chapters of physics, so that the physicists only know him as one of their own. Robert Mayer wasnt a physicist, but another country doctor; and Pasteur, who made bacteriology, was a tanners son or a chemist, as you will.

That ability to impart knowledge  what does it consist of?  a deep belief in the interest and importance of the thing taught, a concern about it amounting to a sort of passion. A man who knows a subject thoroughly, a man so soaked in it that he eats it, sleeps it and dreams itthis man can always teach it with success, no matter how little he knows of technical pedagogy. That is because there is enthusiasm in him, and because enthusiasm is almost as contagious as fear or the barbers itch. An enthusiast is willing to go to any trouble to impart the glad news bubbling within him. He thinks that it is important and valuable for to know; given the slightest glow of interest in a pupil to start with, he will fan that glow to a flame. No hollow formalism cripples him and slows him down. He drags his best pupils along as fast as they can go, and he is so full of the thing that he never tires of expounding its elements to the dullest.
This passion, so unordered and yet so potent, explains the capacity for teaching that one frequently observes in scientific men of high attainments in their specialtiesfor example, Huxley, Ostwald, Karl Ludwig, Virchow, Billroth, Jowett, William G. Sumner, Halsted and Oslermen who knew nothing whatever about the so-called science of pedagogy, and would have derided its alleged principles if they had heard them stated.

The complexity of contemporary biology has led to an extreme specialization, which has inevitably been followed by a breakdown in communication between disciplines. Partly as a result of this, the members of each specialty tend to feel that their own work is fundamental and that the work of other groups, although sometimes technically ingenious, is trivial or at best only peripheral to an understanding of truly basic problems and issues. There is a familiar resolution to this problem but it is sometimes difficulty to accept emotionally. This is the idea that there are a number of levels of biological integration and that each level offers problems and insights that are unique to it; further, that each level finds its explanations of mechanism in the levels below, and its significances in the levels above it.

From 'Interaction of physiology and behavior under natural conditions', collected in R.I. Bowman (ed.), The Galapagos (1966), 39.

The extraordinary development of modern science may be her undoing. Specialism, now a necessity, has fragmented the specialities themselves in a way that makes the outlook hazardous. The workers lose all sense of proportion in a maze of minutiae.

You cannot do without one specialty. You must have some base-line to measure the work and attainments of others. For a general view of the subject, study the history of the sciences. Broad knowledge of all Nature has been the possession of no naturalist except Humboldt, and general relations constituted his specialty.

Any specialty, if important, is too important to be left to the specialists. After all, the specialist cannot function unless he concentrates more or less entirely on his specialty and, in doing so, he will ignore the vast universe lying outside and miss important elements that ought to help guide his judgment. He therefore needs the help of the nonspecialist, who, while relying on the specialist for key information, can yet supply the necessary judgment based on everything else Science, therefore, has become too important to be left to the scientists.

In 'The Fascination of Science', The Roving Mind (1983), 123. Asimov begins by extending a quote by George Clemenceau: War is too important to be left to the generals.