All scientists must focus closely on limited targets. Whether or not ones findings on a limited subject will have wide applicability depends to some extent on chance, but biologists of superior ability repeatedly focus on questions the answers to which either have wide ramifications or lead to new areas of investigation. One procedure that can be effective is to attempt both reduction and synthesis; that is, direct a question at a phenomenon on one integrative level, identify its mechanism at a simpler level, then extrapolate its consequences to a more complex level of integration.

Common integration is only the memory of differentiation...

Does anyone believe that the difference between the Lebesgue and Riemann integrals can have physical significance, and that whether say, an airplane would or would not fly could depend on this difference? If such were claimed, I should not care to fly in that plane.

Evolution is an integration of matter and concomitant dissipation of motion during which the matter passes from an indefinite incoherent homogeneity to a definite coherent heterogeneity, and during which the retained motion undergoes a parallel transformation. 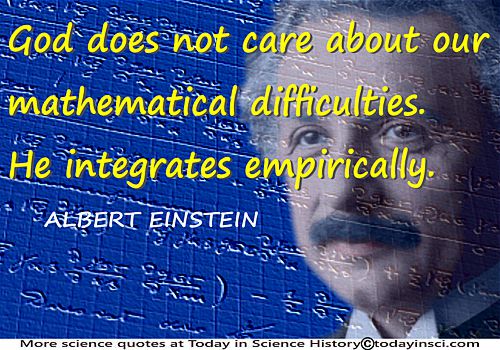 God does not care about our mathematical difficulties. He integrates empirically.

In essence, science is a perpetual search for an intelligent and integrated comprehension of the world we live in.

Life spirals laboriously upward to higher and even higher levels, paying for every step.

As quoted in Mark Davidson, Uncommon Sense: The Life and Thought of Ludwig Von Bertalanffy (1901-1972), Father of General Systems Theory (1983), 220. Robert G.B. Reid follow this with an explanatory commentDeath was the price of the multicellular condition; pain the price of nervous integration; anxiety the price of consciousnessin Evolutionary Theory: The Unfinished Synthesis (1985), 236. Reids comment was not made in quotation marks. However, Bertanffys actually quote was concatenated with Reid's comment and attributed only to Bertanffy, in Michael Dowd, Thank God for Evolution: How the Marriage of Science and Religion (2008), 93, and subsequently requoted thusly by later authors.

Nature laughs at the difficulties of integration.

Science is intimately integrated with the whole social structure and cultural tradition. They mutually support one otheronly in certain types of society can science flourish, and conversely without a continuous and healthy development and application of science such a society cannot function properly.

The Social System (1951, 1977), Chap. 8, 111. As a functionalist, Parsons argued that social practices had to be studied in terms of their function in maintaining society.

Science itself is badly in need of integration and unification. The tendency is more and more the other way ... Only the graduate student, poor beast of burden that he is, can be expected to know a little of each. As the number of physicists increases, each specialty becomes more self-sustaining and self-contained. Such Balkanization carries physics, and indeed, every science further away, from natural philosophy, which, intellectually, is the meaning and goal of science.

Surely the mitochondrion that first entered another cell was not thinking about the future benefits of cooperation and integration; it was merely trying to make its own living in a tough Darwinian world

The complexity of contemporary biology has led to an extreme specialization, which has inevitably been followed by a breakdown in communication between disciplines. Partly as a result of this, the members of each specialty tend to feel that their own work is fundamental and that the work of other groups, although sometimes technically ingenious, is trivial or at best only peripheral to an understanding of truly basic problems and issues. There is a familiar resolution to this problem but it is sometimes difficulty to accept emotionally. This is the idea that there are a number of levels of biological integration and that each level offers problems and insights that are unique to it; further, that each level finds its explanations of mechanism in the levels below, and its significances in the levels above it.

From 'Interaction of physiology and behavior under natural conditions', collected in R.I. Bowman (ed.), The Galapagos (1966), 39.

The experimental verification of a theory concerning any natural phenomenon generally rests on the result of an integration.

Epigraph in Higher Mathematics for Students of Chemistry and Physics: With Special Reference to Practical Work (1902), Chap 4, 150.

In Introduction to the Study of Indian Languages: With Words, Phrases and Sentences to be Collected (1880), 70.

The integrals which we have obtained are not only general expressions which satisfy the differential equation, they represent in the most distinct manner the natural effect which is the object of the phenomenon when this condition is fulfilled, the integral is, properly speaking, the equation of the phenomenon; it expresses clearly the character and progress of it, in the same manner as the finite equation of a line or curved surface makes known all the properties of those forms.

The powers which tend to preserve, and those which tend to change the condition of the earth's surface, are never in equilibrio; the latter are, in all cases, the most powerful, and, in respect of the former, are like living in comparison of dead forces. Hence the law of decay is one which suffers no exception: The elements of all bodies were once loose and unconnected, and to the same state nature has appointed that they should all return... TIME performs the office of integrating the infinitesimal parts of which this progression is made up; it collects them into one sum, and produces from them an amount greater than any that can be assigned.

This integrative action in virtue of which the nervous system unifies from separate organs an animal possessing solidarity, an individual, is the problem before us. 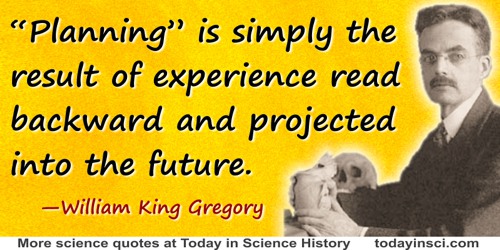