Boss: Dilbert, You have been chosen to design the worldâ€™s safest nuclear power plant.
Dilbert: This is the great assignment that any engineer could hope for. I'm flattered by the trust you have in me.
Boss: By â€śsafeâ€ť I mean â€śnot near my house.â€ť

As is well known the principle of virtual velocities transforms all statics into a mathematical assignment, and by D'Alembert's principle for dynamics, the latter is again reduced to statics. Although it is is very much in order that in gradual training of science and in the instruction of the individual the easier precedes the more difficult, the simple precedes the more complicated, the special precedes the general, yet the min, once it has arrived at the higher standpoint, demands the reverse process whereby all statics appears only as a very special case of mechanics.

I am happy to report to you that the assignment of the Central Committee of the Communist party of the Soviet Union and the Soviet Government has been carried out. The world's first space flight has been accomplished in the Soviet space ship Vostok. All systems and equipment worked impeccably, I feel very well and am prepared to carry out any assignment of the party and the government.

If you look at a tree and think of it as a design assignment, it would be like asking you to make something that makes oxygen, sequesters carbon, fixes nitrogen, distills water, provides habitat for hundreds of species, accrues solar energyâ€™s fuel, makes complex sugars and food, changes colors with the seasons, creates microclimates, and self-replicates.

It is a happy world after all. The air, the earth, the water teem with delighted existence. In a spring noon, or a summer evening, on whichever side I turn my eyes, myriads of happy beings crowd upon my view. â€śThe insect youth are on the wing.â€ť Swarms of new-born flies are trying their pinions in the air. Their sportive motions, their wanton mazes, their gratuitous activity testify their joy and the exultation they feel in their lately discovered faculties â€¦ The whole winged insect tribe, it is probable, are equally intent upon their proper employments, and under every variety of constitution, gratified, and perhaps equally gratified, by the offices which the author of their nature has assigned to them.

Natural Theology: or, Evidences of the Existence and Attributes of The Deity, Collected from the Appearances of Nature (1802), 490-1. 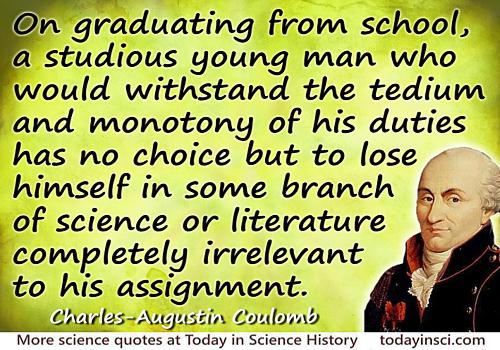 On graduating from school, a studious young man who would withstand the tedium and monotony of his duties has no choice but to lose himself in some branch of science or literature completely irrelevant to his assignment.

From memorandum 'MĂ©moire sur le service des officiers du Corps du GĂ©nie' (1776) to the minister of war, the comte de Saint-Germain. Reproduced as Appendix C in C. Stewart Gillmor, Coulomb and the Evolution of Physics and Engineering in Eighteenth Century France (1971), 255-261. Coulomb proposed (unsuccessfully) that the corps of military engineers in peacetime engage their skills in construction of public works. As cited in Charles Coulston Gillispie, Science and Polity in France: The End of the Old Regime (1980, 2004), 530.

Plenty of mathematicians, Hardy knew, could follow a step-by-step discursus unflaggingly—yet counted for nothing beside Ramanujan. Years later, he would contrive an informal scale of natural mathematical ability on which he assigned himself a 25 and Littlewood a 30. To David Hilbert, the most eminent mathematician of the day, he assigned an 80. To Ramanujan he gave 100.

The powers which tend to preserve, and those which tend to change the condition of the earth's surface, are never in equilibrio; the latter are, in all cases, the most powerful, and, in respect of the former, are like living in comparison of dead forces. Hence the law of decay is one which suffers no exception: The elements of all bodies were once loose and unconnected, and to the same state nature has appointed that they should all return... TIME performs the office of integrating the infinitesimal parts of which this progression is made up; it collects them into one sum, and produces from them an amount greater than any that can be assigned.

The universe is governed by science. But science tells us that we canâ€™t solve the equations, directly in the abstract. We need to use the effective theory of Darwinian natural selection of those societies most likely to survive. We assign them higher value.
[Answer to question: What is the value in knowing â€śWhy are we here?â€ť]

To every Form of being is assignedâ€™
Thus calmly spoke the venerable Sage,
An active Principle:â€”howeâ€™er remove!
From sense and observation, it subsists.
In all things, in all natures; in the stars
Of azure heaven, the unenduring clouds,
In flower and tree, in every pebbly stone
That paves the brooks, the stationary rocks,
The moving waters, and the invisible air.â€™

While up to this time contrary sexual instinct has had but an anthropological, clinical, and forensic interest for science, now, as a result of the latest investigations, there is some thought of therapy in this incurable condition, which so heavily burdens its victims, socially, morally, and mentally. A preparatory step for the application of therapeutic measures is the exact differentiation of the acquired from the congenital cases; and among the latter again, the assignment of the concrete case to its proper position in the categories that have been established empirically.