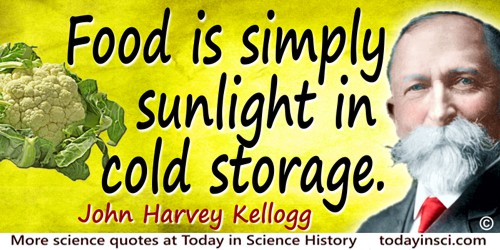 In Platonica: A Platonicall Song of the Soul (1642). In this book of poems, More uses the word energie many times, and in the opening section, 'To the Reader'. The definition quoted appears at the end of the book in 'The interpretation of the more unusual names or words that occurre in the foregoing Poems.' 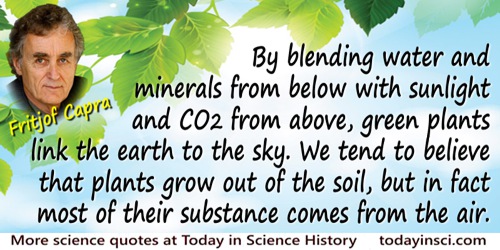 By blending water and minerals from below with sunlight and CO2 from above, green plants link the earth to the sky. We tend to believe that plants grow out of the soil, but in fact most of their substance comes from the air. The bulk of the cellulose and the other organic compounds produced through photosynthesis consists of heavy carbon and oxygen atoms, which plants take directly from the air in the form of CO2. Thus the weight of a wooden log comes almost entirely from the air. When we burn a log in a fireplace, oxygen and carbon combine once more into CO2, and in the light and heat of the fire we recover part of the solar energy that went into making the wood.

George Stephenson, with a sagacity of mind in advance of the science of his day, answered, when asked what was the ultimate cause of motion of his locomotive engine, ‘that it went by the bottled-up rays of the sun.’

I have no doubt that we will be successful in harnessing the sun's energy. â€¦ If sunbeams were weapons of war, we would have had solar energy centuries ago.

I have satisfied myself that the [cosmic] rays are not generated by the formation of new matter in space, a process which would be like water running up a hill. Nor do they come to any appreciable amount from the stars. According to my investigations the sun emits a radiation of such penetrative power that it is virtually impossible to absorb it in lead or other substances. ... This ray, which I call the primary solar ray, gives rise to a secondary radiation by impact against the cosmic dust scattered through space. It is the secondary radiation which now is commonly called the cosmic ray, and comes, of course, equally from all directions in space. [The article continues: The phenomena of radioactivity are not the result of forces within the radioactive substances but are caused by this ray emitted by the sun. If radium could be screened effectively against this ray it would cease to be radioactive, he said.]

I will set ambitious goalsâ€”to see 500 million solar panels installed within four years and enough renewable electricity to power every home in America within 10 years.

If we do not learn to eliminate waste and to be more productive and more efficient in the ways we use energy, then we will fall short of this goal [for the Nation to derive 20 percent of all the energy we use from the Sun, by 2000]. But if we use our technological imagination, if we can work together to harness the light of the Sun, the power of the wind, and the strength of rushing streams, then we will succeed.

If you know how to make chemical or electrical energy out of solar energy the way plants do itâ€”without going through a heat engineâ€”that is certainly a trick. And Iâ€™m sure we can do it. Itâ€™s just a question of how long it will take to solve the technical question.

As quoted in 'Melvin Calvin and Photosynthesis', Science [email protected], 2, No. 11.

If you look at a tree and think of it as a design assignment, it would be like asking you to make something that makes oxygen, sequesters carbon, fixes nitrogen, distills water, provides habitat for hundreds of species, accrues solar energyâ€™s fuel, makes complex sugars and food, changes colors with the seasons, creates microclimates, and self-replicates.

Mostly, I spend my time being a mother to my two children, working in my organic garden, raising masses of sweet peas, being passionately involved in conservation, recycling and solar energy.

Sir Edward has calculated that quick-growing Indian eucalyptus trees have a yield of nine and one-quarter tons of wood an acre a year. As the wood contains 0.8 per cent of the solar energy reaching the ground in the tropics in the form of heat, Sir Edward has suggested that in theory eucalyptus forests could provide a perpetual source of fuel. He has said that by rotational tree planting and felling, a forest of twenty kilometers square would enable a wood consuming power station to provide 10,000 kilowatts of power.

The fuel in the earth will be exhausted in a thousand or more years, and its mineral wealth, but man will find substitutes for these in the winds, the waves, the sun's heat, and so forth. (1916)

The power of man to do workâ€”one man-powerâ€”is, in its purely physical sense, now an insignificant accomplishment, and could only again justify his existence if other sources of power failed. â€¦ Curious persons in cloisteral seclusion are experimenting with new sources of energy, which, if ever harnessed, would make coal and oil as useless as oars and sails. If they fail in their quest, or are too late, so that coal and oil, everywhere sought for, are no longer found, and the only hope of men lay in their time-honoured traps to catch the sunlight, who doubts that galley-slaves and helots would reappear in the world once more?

The sun's rays are the ultimate source of almost every motion which takes place on the surface of the earth. By their heat are produced all winds, and those disturbances in the electric equilibrium of the atmosphere which give rise to the phenomena of terrestrial magnetism. By their vivifying action vegetables are elaborated from inorganic matter, and become in their turn the support of animals and of man, and the sources of those great deposits of dynamical efficiency which are laid up for human use in our coal strata. By them the waters of the sea are made to circulate in vapor through the air, and irrigate the land, producing springs and rivers. By them are produced all disturbances of the chemical equilibrium of the elements of nature which, by a series of compositions and decompositions, give rise to new products, and originate a transfer of materials. Even the slow degradation of the solid constituents of the surface, in which its chief geological changes consist, and their diffusion among the waters of the ocean, are entirely due to the abrasion of the wind, rain, and tides, which latter, however, are only in part the effect of solar influence and the alternate action of the seasons.

The use of solar energy has not been opened up because the oil industry does not own the sun.

Often seen, though without citation, for example, Cutler J. Cleveland and Christopher G. Morris, Dictionary of Energy (2009), 578. If you know a primary source, please contact Webmaster.

There is deposited in them [plants] an enormous quantity of potential energy [SpannkrĂ¤fte], whose equivalent is provided to us as heat in the burning of plant substances. So far as we know at present, the only living energy [lebendige Kraft] absorbed during plant growth are the chemical rays of sunlightâ€¦ Animals take up oxygen and complex oxidizable compounds made by plants, release largely as combustion products carbonic acid and water, partly as simpler reduced compounds, thus using a certain amount of chemical potential energy to produce heat and mechanical forces. Since the latter represent a relatively small amount of work in relation to the quantity of heat, the question of the conservation of energy reduces itself roughly to whether the combustion and transformation of the nutritional components yields the same amount of heat released by animals.

Thereâ€™s probably 5000 times more solar energy than the humans will ever need. We could cover our highways with solar collectors to make ribbons of energy, and I think that itâ€™s really the largest job creation program in the history of the planet thatâ€™s in front of us. Itâ€™s a celebration of the abundance of human creativity combined with the abundance of the natural world.

We are like tenant farmers chopping down the fence around our house for fuel when we should be using Natures inexhaustible sources of energy â€” sun, wind and tide. ... I'd put my money on the sun and solar energy. What a source of power! I hope we don't have to wait until oil and coal run out before we tackle that.

Edison in conversation Henry Ford and Harvey Firestone (1931), quoted as a recollection of the author, in James Newton, Uncommon Friends: Life with Thomas Edison, Henry Ford, Harvey Firestone, Alexis Carrel & Charles Lindbergh (1987), 31. The quote is not cited from a print source. However, in the introduction the author said he â€śkept a diary in which I noted times and places, key phrases, and vivid impressions.â€ť He also â€śrelied on publications by and about my friends, which jogged my memory.” Webmaster has found no earlier record of this quote, and thus suggests the author may have the gist of what Edison said, but is not quoting the exact words uttered by Edison, although quote marks are used to state what Edison said.