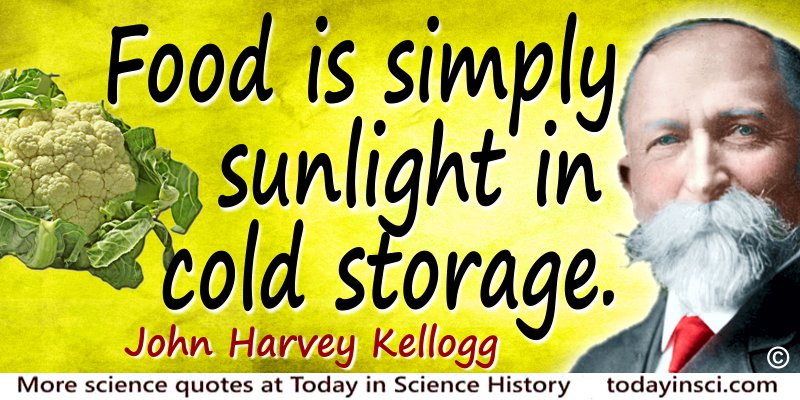 “Food is simply sunlight in cold storage.”
— John Harvey Kellogg
From New Dietetics: What to Eat and How (1921).

Yes, it is “that” Kellogg — John Harvey Kellogg, whose interest in healthy eating led to the Corn Flakes product. He was a physician, interested in the best nutrition for his patients at the Battle Creek Sanitarium in Michigan. Based on the food developed there, it was his brother, William K. Kellogg, who was the businessman that began commercial production of breakfast cereal as the Battle Creek Toasted Corn Flake Company (1906).

Throughout years of diligent study of food and health, he wrote many books, including New Dietetics: What to Eat and How. In its first chapter, he introduces at the opening of the first chapter the concept of food as a fuel, an energy source:

Life has been likened to a consuming fire—a flame. One of the chief functions of food is to serve as fuel by the burning of which the animal heat is maintained, and the energy required for every sort of bodily activity is supplied.

The subject quote comes from the section that ends the chapter, subtitled “The Source of Food.” It shows that by the time it was written, 1921, science had measured the speed of light, and had a good understanding of the importance of photosynthesis. This was common knowledge. Plants take the energy of sunlight to produce our food, both vegetables and meat, which in turn are used to power the human body — with sunlight (and water and carbon dioxide). He wrote:

The Source of Food

“For all the thousands of various substances which are capable of sustaining animal life we are indebted to the sun. The energy of the sunlight, captured by the mysterious alchemy of the chlorophyl grains found in green leaves, is the source of all human energy as well as of the energy displayed in the manifold activities of animal life in its varied forms. Indeed, almost every form of energy with which we are acquainted is derived from the sun. It is sunlight in modified form which turns all the windmills and water wheels and the machinery which they drive. It is the energy derived from coal and petroleum (fossil sunlight) which propels our steam and gas engines, our locomotives and automobiles. The chlorophyl grains of the green leaf capture the rays of light as they flit by at the rate of 186,000 miles a second, and with this magic force, bind together the atoms which form the so-called organic molecules, and endow with the mysterious properties of living matter the lifeless particles of hydrogen, oxygen, iron, lime and other chemical elements which enter into the composition of animal and vegetable structures. Food is simply sunlight in cold storage. The function of the plant is to store the energy borrowed from the sun, preparing it for the service of man and animals that, like the steam engine, the furnace or the lamp, must be regarded as mechanisms for using or expending energy. The heat which glows in the fire on the hearth, the light which shines out from the incandescent lamp or the brilliant electric arc, are nothing more than resuscitated sunlight; so likewise the heat of our bodies and the energy of mind and muscle which we are able to display, are transmuted sunshine.”