As physicists have arranged an extensive series of effects under the general term of Heat, so they have named another series Light, and a third they have called Electricity. We find ... that all these principles are capable of being produced through the medium of living bodies, for nearly all animals have the power of evolving heat; many insects, moreover, can voluntarily emit light; and the property of producing electricity is well evinced in the terrible shock of the electric eel, as well as in that of some other creatures. We are indeed in the habit of talking of the Electric fluid, or the Galvanic fluid, but this in reality is nothing but a licence of expression suitable to our finite and material notions.

In the Third Edition of Elements of Electro-Metallurgy: or The Art of Working in Metals by the Galvanic Fluid (1851), 1.

Do not electric bodies by friction emit a subtile exhalation or spirit by which they perform their attractions?

As quoted in Roderick W. Home, Electricity and Experimental Physics in Eighteenth-Century Europe (1992), 103.

Do not great Bodies conserve their heat the longest, their parts heating one another, and may not great dense and fix'd Bodies, when heated beyond a certain degree, emit Light so copiously, as by the Emission and Re-action of its Light, and the Reflexions and Refractions of its Rays within its Pores to grow still hotter, till it comes to a certain period of heat, such as is that of the Sun?

Food production is now so energy-intensive that more carbon is emitted providing a person with enough calories to walk to the shops than a car would emit over the same distance.
Citing calculations made by environmentalist author, Chris Goodall.

'Walking to the shops damages planet more than going by car', in The Times (4 Aug 2007)

I have satisfied myself that the [cosmic] rays are not generated by the formation of new matter in space, a process which would be like water running up a hill. Nor do they come to any appreciable amount from the stars. According to my investigations the sun emits a radiation of such penetrative power that it is virtually impossible to absorb it in lead or other substances. ... This ray, which I call the primary solar ray, gives rise to a secondary radiation by impact against the cosmic dust scattered through space. It is the secondary radiation which now is commonly called the cosmic ray, and comes, of course, equally from all directions in space. [The article continues: The phenomena of radioactivity are not the result of forces within the radioactive substances but are caused by this ray emitted by the sun. If radium could be screened effectively against this ray it would cease to be radioactive, he said.] 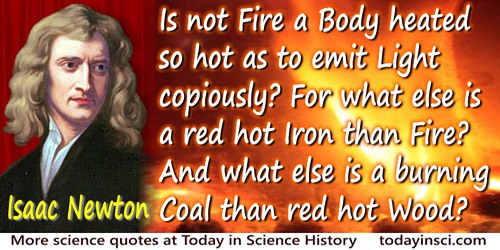 Is not Fire a Body heated so hot as to emit Light copiously? For what else is a red hot Iron than Fire? And what else is a burning Coal than red hot Wood?

Light is always propagated in empty space with a definite velocity, c, which is independent of the state of motion of the emitting body.

The incomplete knowledge of a system must be an essential part of every formulation in quantum theory. Quantum theoretical laws must be of a statistical kind. To give an example: we know that the radium atom emits alpha-radiation. Quantum theory can give us an indication of the probability that the alpha-particle will leave the nucleus in unit time, but it cannot predict at what precise point in time the emission will occur, for this is uncertain in principle.

The universe seems to me infinitely strange and foreign. At such a moment I gaze upon it with a mixture of anguish and euphoria; separate from the universe, as though placed at a certain distance outside it; I look and I see pictures, creatures that move in a kind of timeless time and spaceless space, emitting sounds that are a kind of language I no longer understand or ever register.

This is a classical example of the process which we call, with Tinbergen, a redirected activity. It is characterized by the fact that an activity is released by one object but discharged at another, because the first one, while presenting stimuli specifically eliciting the response, simultaneously emits others which inhibit its discharge. A human example is furnished by the man who is very angry with someone and hits the table instead of the other man's jaw, because inhibition prevents him from doing so, although his pent-up anger, like the pressure within a volcano, demands outlet.

We bombarded aluminum with alpha rays  then after a certain period of irradiation, we removed the source of alpha rays. We now observed that the sheet of aluminum continued to emit positive electrons over a period of several minutes.

Describing the crucial experiment made in 1934 that discovered artificial radioactivity. As quoted in John Daintith and Derek Gjertsen, A Dictionary of Scientists (1999), 287.

As quoted in 'Radium', New York Times (22 Feb 1903), 6. The reporter clarifies that this statement is popular not scientific. However, it is somewhat prescient, since only two years later (1905) Einstein published his E=mc² formula relating mass and energy. The top of Ben Nevis, the highest mountain in Britain, is 1344-m high. As energy, one gram mass would lift about 68 million tonnes thereover a thousand modern battleships.