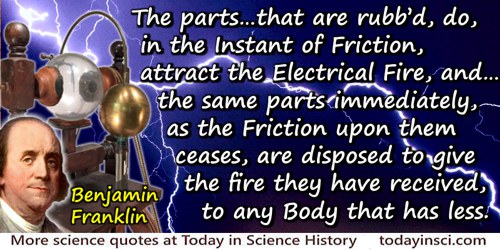 And we daily in our experiments electrise bodies plus or minus, as we think proper. [These terms we may use till your Philosophers give us better.] To electrise plus or minus, no more needs to be known than this, that the parts of the Tube or Sphere, that are rubbd, do, in the Instant of Friction, attract the Electrical Fire, and therefore take it from the Thin rubbing; the same parts immediately, as the Friction upon them ceases, are disposed to give the fire they have received, to any Body that has less.

Letter 25 May 1747. Quoted in I. Bernard Cohen, Franklin and Newton: An Enquiry into Speculative Newtonian Experimental Science and Franklins Work in Electricity as an Example Thereof (1956), 439.

But as no two (theoreticians) agree on this (skin friction) or any other subject, some not agreeing today with what they wrote a year ago, I think we might put down all their results, add them together, and then divide by the number of mathematicians, and thus find the average coefficient of error. (1908)

Do not electric bodies by friction emit a subtile exhalation or spirit by which they perform their attractions?

As quoted in Roderick W. Home, Electricity and Experimental Physics in Eighteenth-Century Europe (1992), 103.

If, then, the motion of every particle of matter in the universe were precisely reversed at any instant, the course of nature would be simply reversed for ever after. The bursting bubble of foam at the foot of a waterfall would reunite and descend into the water; the thermal motions would reconcentrate their energy, and throw the mass up the fall in drops re-forming into a close column of ascending water. Heat which had been generated by the friction of solids and dissipated by conduction, and radiation, and radiation with absorption, would come again to the place of contact, and throw the moving body back against the force to which it had previously yielded. Boulders would recover from the mud materials required to rebuild them into their previous jagged forms, and would become reunited to the mountain peak from which they had formerly broken away. And if also the materialistic hypothesis of life were true, living creatures would grow backwards, with conscious knowledge of the future but no memory of the past, and would become again unborn. 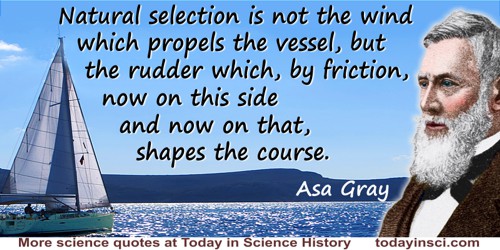 Natural selection is not the wind which propels the vessel, but the rudder which, by friction, now on this side and now on that, shapes the course.

Illustrating the Darwinian Doctrine, in his essay 'Evolutionary Teleology,' in Darwiniana: Essays and Reviews Pertaining to Darwinism (1876), 386. 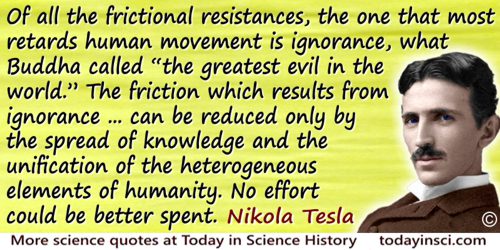 Of all the frictional resistances, the one that most retards human movement is ignorance, what Buddha called 'the greatest evil in the world.' The friction which results from ignorance ... can be reduced only by the spread of knowledge and the unification of the heterogeneous elements of humanity. No effort could be better spent.

Self-esteem must be earned! When you dare to dream, dare to follow that dream, dare to suffer through the pain, sacrifice, self-doubts, and friction from the world, you will genuinely impress yourself.

The earth was covered by a huge ice sheet which buried the Siberian mammoths, and reached just as far south as did the phenomenon of erratic boulders. This ice sheet filled all the irregularities of the surface of Europe before the uplift of the Alps, the Baltic Sea, all the lakes of Northern Germany and Switzerland. It extended beyond the shorelines of the Mediterranean and of the Atlantic Ocean, and even covered completely North America and Asiatic Russia. When the Alps were uplifted, the ice sheet was pushed upwards like the other rocks, and the debris, broken loose from all the cracks generated by the uplift, fell over its surface and, without becoming rounded (since they underwent no friction), moved down the slope of the ice sheet.

From Études sur Les Glaciers (1840), as translated by Albert V. Carozzi in Studies on Glaciers: Preceded by the Discourse of Neuchâtel (1967), 166.

What is there about fire that's so lovely? ... It's perpetual motion; the thing man wanted to invent but never did. Or almost perpetual motion. ... What is fire? It's a mystery. Scientists give us gobbledegook about friction and molecules. But they don't really know.
[Fahrenheit 451 refers to the temperature at which book paper burns. In the short novel of this title 'firemen' burn books forbidden by the totalitaran regime.]

When external objects are impressed on the sensory nerves, they excite vibrations in the aether residing in the pores of these nerves... Thus it seems that light affects both the optic nerve and the aether and ... the affections of the aether are communicated to the optic nerve, and vice versa. And the same may be observed of frictions of the skin, taste, smells and sounds... Vibrations in the aether will agitate the small particles of the medullary substance of the sensory nerves with synchronous vibrations... up to the brain... These vibrations are motions backwards and forwards of small particles, of the same kind with the oscillations of pendulums, and the tremblings of the particles of the sounding bodies (but) exceedingly short and small, so as not to have the least efficacy to disturb or move the whole bodies of the nerves... That the nerves themselves should vibrate like musical strings is highly absurd.