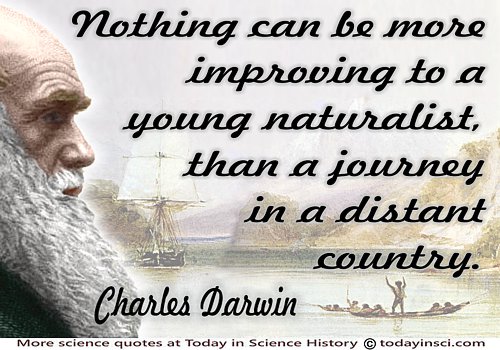 Among the scenes which are deeply impressed on my mind, none exceed in sublimity the primeval forests undefaced by the hand of man; whether those of Brazil, where the powers of Life are predominant, or those of Tierra del Fuego, where Death and Decay prevail. Both are temples filled with the varied productions of the God of Nature: no one can stand in these solitudes unmoved, and not feel that there is more in man than the mere breath of his body.

Early in my school days a boy had a copy of the Wonders of the World, which I often read, and disputed with other boys about the veracity of some of the statements; and I believe that this book first gave me a wish to travel in remote countries, which was ultimately fulfilled by the voyage of the Beagle.

Formerly Milton's Paradise Lost had been my chief favourite, and in my excursions during the voyage of the Beagle, when I could take only a single small volume, I always chose Milton.

I have stated, that in the thirteen species of ground-finches [in the Galapagos Islands], a nearly perfect gradation may be traced, from a beak extraordinarily thick, to one so fine, that it may be compared to that of a warbler. I very much suspect, that certain members of the series are confined to different islands; therefore, if the collection had been made on any one island, it would not have presented so perfect a gradation. It is clear, that if several islands have each their peculiar species of the same genera, when these are placed together, they will have a wide range of character. But there is not space in this work, to enter on this curious subject.

Journal of Researches: into the Natural History and Geology of the Countries Visited During the Voyage of H.M.S. Beagle Round the World (1839), ch. XIX, 475.

In July [1837] opened first note-book on Transmutation of Species. Had been greatly struck from about the month of previous March on character of South American fossils, and species on Galapagos Archipelago. These facts (especially latter), origin of all my views.

Never, I believe, did a vessel leave England better provided, or fitted for the service she was destined to perform, and for the health and comfort of her crew, than the Beagle. If we did want any thing which could have been carried, it was our own fault; for all that was asked for, from the Dockyard, Victualling Department, Navy Board, or Admiralty, was granted.

Nothing can be more improving to a young naturalist, than a journey in a distant country.

Journal of Researches: into the Natural History and Geology of the Countries Visited During the Voyage of H.M.S. Beagle Round the World (1839), ch. XXIII, 607.

Seeing this gradation and diversity of structure in one small, intimately related group of birds, one might really fancy that from an original paucity of birds in this archipelago, one species had been taken and modified for different ends.
[Comment added to the second edition (1845) of Voyage of the Beagle (1839) concerning the variations he found of finches in the Galapagos Islands. In the first edition (p.461) he had merely described the thirteen allied species of finch but without further commentary.]

The great scientists have been occupied with valuesit is only their vulgar followers who think they are not. If scientists like Descartes, Newton, Einstein, Darwin, and Freud dont look deeply into experience, what do they do? They have imaginations as powerful as any poets and some of them were first-rate writers as well. How do you draw the line between Walden and The Voyage of the Beagle? The product of the scientific imagination is a new vision of relationslike that of the artistic imagination.

The theory which I would offer, is simply, that as the land with the attached reefs subsides very gradually from the action of subterranean causes, the coral-building polypi soon raise again their solid masses to the level of the water: but not so with the land; each inch lost is irreclaimably gone; as the whole gradually sinks, the water gains foot by foot on the shore, till the last and highest peak is finally submerged.

Journal of Researches: into the Natural History and Geology of the Countries Visited During the Voyage of H.M.S. Beagle Round the World (1839), ch. XXll, 557.

The voyage of the Beagle has been by far the most important event in my life and has determined my whole career; yet it depended on so small a circumstance as my uncle offering to drive me 30 miles to Shrewsbury, which few uncles would have done, and on such a trifle as the shape of my nose.

At the end of a particular drive, his uncle, Josiah Wedgwood, convinced Darwins reluctant father that Charles should voyage on the Beagle. Captain Fitz-Roy believed he could read a mans character from the shape of his nose. In Charles Darwin and Francis Darwin (ed.), 'Autobiography', The Life and Letters of Charles Darwin (1887, 1896), Vol. 1, 51.

Zorrillos, or skunks,  are far from uncommon.  Conscious of its power, it roams by day about the open plain, and fears neither dog nor man. If a dog is urged to the attack, its courage is instantly checked by a few drops of the fetid oil, which brings on violent sickness and running at the nose. Whatever is once polluted by it, is for ever useless. Azara says the smell can be perceived at a league distant; more than once, when entering the harbour of Monte Video, the wind being off shore, we have perceived the odour on board the Beagle. Certain it is, that every animal most willingly makes room for the Zorrillo.