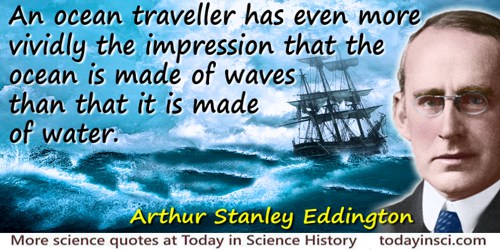 An ocean traveller has even more vividly the impression that the ocean is made of waves than that it is made of water.

Every leaf and twig was this morning covered with a sparkling ice armor; even the grasses in exposed fields were hung with innumerable diamond pendants, which jingled merrily when brushed by the foot of the traveler. It was literally the wreck of jewels and the crash of gems.

Exact science and its practical movements are no checks on the greatest poet, but always his encouragement and support  The sailor and traveller, the anatomist, chemist, astronomer, geologist, phrenologist, spiritualist, mathematician, historian and lexicographer are not poets, but they are the lawgivers of poets and their construction underlies the structure of every perfect poem.

In Walt Whitman and William Michael Rossetti (ed.), 'Preface to the First Edition of Leaves of Grass', Poems By Walt Whitman (1868), 46.

He who is only a traveler learns things at second-hand and by the halves, and is poor authority. We are most interested when science reports what those men already know practically or instinctively, for that alone is a true humanity.

I am the most travelled of all my contemporaries; I have extended my field of enquiry wider than anybody else, I have seen more countries and climes, and have heard more speeches of learned men. No one has surpassed me in the composition of lines, according to demonstration, not even the Egyptian knotters of ropes, or geometers.

I am truly a lone traveler and have never belonged to my country, my home, my friends, or even my immediate family, with my whole heart; in the face of all these ties, I have never lost a sense of distance and a need for solitude.

If the Easter pilgrims in Piazza San Pietro were to represent the carriers in a metal, then an insulator would resemble the Antarctic with one solitary traveller. In the abundance of carriers there is an enormous gap between conductors and insulators.

If we are correct in understanding how evolution actually works, and provided we can survive the complications of war, environmental degradation, and possible contact with interstellar planetary travelers, we will look exactly the same as we do now. We wont change at all. The species is now so widely dispersed that it is not going to evolve, except by gradualism.

If we knew all the laws of Nature, we should need only one fact or the description of one actual phenomenon to infer all the particular results at that point. Now we know only a few laws, and our result is vitiated, not, of course, by any confusion or irregularity in Nature, but by our ignorance of essential elements in the calculation. Our notions of law and harmony are commonly confined to those instances which we detect, but the harmony which results from a far greater number of seemingly conflicting, but really concurring, laws which we have not detected, is still more wonderful. The particular laws are as our points of view, as to the traveler, a mountain outline varies with every step, and it has an infinite number of profiles, though absolutely but one form. Even when cleft or bored through, it is not comprehended in its entireness.

If [in a rain forest] the traveler notices a particular species and wishes to find more like it, he must often turn his eyes in vain in every direction. Trees of varied forms, dimensions, and colors are around him, but he rarely sees any of them repeated. Time after time he goes towards a tree which looks like the one he seeks, but a closer examination proves it to be distinct.

In [David] Douglas's success in life ... his great activity, undaunted courage, singular abstemiousness, and energetic zeal, at once pointed him out as an individual eminently calculated to do himself credit as a scientific traveler.

Many people are shrinking from the future and from participation in the movement toward a new, expanded reality. And, like homesick travelers abroad, they are focusing their anxieties on home. The reasons are not far to seek. We are at a turning point in human history... We could turn our attention to the problems that going to the moon certainly will not solve ... But I think this would be fatal to our future... A society that no longer moves forward does not merely stagnate; it begins to die.

The number of travellers by gigs, the outside of coaches, and on horseback, have, since the introduction of railways, been prodigiously diminished; and as, in addition, the members of the medical faculty having lent their aid to run down the use of water-proof (apparently having found it decided enemy against their best friends colds and catarrhs), the use of the article [the Macintosh] in the form of cloaks, etc., has of late become comparatively extinct.

A Biographical Memoir of the late Charles Macintosh Esq FRS (1847), 89.

The traveler was active; he went strenuously in search of people, of adventure, of experience. The tourist is passive; he expects interesting things to happen to him. He goes sight-seeing.

There are no foreign lands. It is the traveler only who is foreign.

Travelers are always discoverers, especially those who travel by air.

We are all travelers who are journeying  not knowing where the next day of our life is going to take us. We have no understanding of the surprises that are in store for us. Steadily we will know, understand and decipher and then it will all start to make sense. Until then keep travelling.

When the traveler goes alone he gets acquainted with himself.

Scientific people, proceeded the Time Traveler, after the pause required for the proper assimilation of this, know very well that Time is only a kind of Space.