Can a physicist visualize an electron? The electron is materially inconceivable and yet, it is so perfectly known through its effects that we use it to illuminate our cities, guide our airlines through the night skies and take the most accurate measurements. What strange rationale makes some physicists accept the inconceivable electrons as real while refusing to accept the reality of a Designer on the ground that they cannot conceive Him?

Gas Lights - Without Oil, Tallow, Wicks or Smoke. It is not necessary to invite attention to the gas lights by which my salon of paintings is now illuminated; those who have seen the ring beset with gems of light are sufficiently disposed to spread their reputation; the purpose of this notice is merely to say that the Museum will be illuminated every evening until the public curiosity be gratified.
[Promoting the gas lights Peale installed to attract paying visitors to his museum of portraits and natural history exhibits.]

He uses statistics as a drunken man uses lamp-postsfor support rather than illumination.

His mind illumined the Past and the Future and wrought greatly for the present. By his genius distant lands converse and men sail unafraid upon the deep.

Inscription on the tomb of Reginald and Helen Fessenden in Bermuda. In Frederick Seitz, The Cosmic Inventor: Reginald Aubrey Fessenden (1866-1932) (1999), 61, being Transactions of the American Philosophical Society, Held at Philadelphia For Promoting Useful Knowledge, Vol. 86, Pt. 6.

I am a strong advocate for free thought on all subjects, yet it appears to me (whether rightly or wrongly) that direct arguments against christianity & theism produce hardly any effect on the public; & freedom of thought is best promoted by the gradual illumination of men's minds, which follow[s] from the advance of science. It has, therefore, been always my object to avoid writing on religion, & I have confined myself to science. I may, however, have been unduly biassed by the pain which it would give some members of my family, if I aided in any way direct attacks on religion.

I think that the unity we can seek lies really in two things. One is that the knowledge which comes to us at such a terrifyingly, inhumanly rapid rate has some order in it. We are allowed to forget a great deal, as well as to learn. This order is never adequate. The mass of ununderstood things, which cannot be summarized, or wholly ordered, always grows greater; but a great deal does get understood.
The second is simply this: we can have each other to dinner. We ourselves, and with each other by our converse, can create, not an architecture of global scope, but an immense, intricate network of intimacy, illumination, and understanding. Everything cannot be connected with everything in the world we live in. Everything can be connected with anything.

In an age of egoism, it is so difficult to persuade man that of all studies, the most important is that of himself. This is because egoism, like all passions, is blind. The attention of the egoist is directed to the immediate needs of which his senses give notice, and cannot be raised to those reflective needs that reason discloses to us; his aim is satisfaction, not perfection. He considers only his individual self; his species is nothing to him. Perhaps he fears that in penetrating the mysteries of his being he will ensure his own abasement, blush at his discoveries, and meet his conscience. True philosophy, always at one with moral science, tells a different tale. The source of useful illumination, we are told, is that of lasting content, is in ourselves. Our insight depends above all on the state of our faculties; but how can we bring our faculties to perfection if we do not know their nature and their laws! The elements of happiness are the moral sentiments; but how can we develop these sentiments without considering the principle of our affections, and the means of directing them? We become better by studying ourselves; the man who thoroughly knows himself is the wise man. Such reflection on the nature of his being brings a man to a better awareness of all the bonds that unite us to our fellows, to the re-discovery at the inner root of his existence of that identity of common life actuating us all, to feeling the full force of that fine maxim of the ancients: 'I am a man, and nothing human is alien to me.'

In early life I had felt a strong desire to devote myself to the experimental study of nature; and, happening to see a glass containing some camphor, portions of which had been caused to condense in very beautiful crystals on the illuminated side, I was induced to read everything I could obtain respecting the chemical and mechanical influences of light, adhesion, and capillary attraction.

It will be possible, through the detailed determination of amino-acid sequences of hemoglobin molecules and of other molecules too, to obtain much information about the course of the evolutionary process, and to illuminate the question of the origin of species.

Knowledge once gained casts a faint light beyond its own immediate boundaries. There is no discovery so limited as not to illuminate something beyond itself.

In 'On the Methods and Tendencies of Physical Investigation', Scientific Addresses (1870), 7.

One-story intellects, two-story intellects, three-story intellects with skylights. All fact-collectors, who have no aim beyond their facts, are one-story men. Two-story men compare, reason, generalize, using the labors of the fact-collectors as well as their own. Three-story men idealize, imagine, predict; their best illumination comes from above, through the skylight. There are minds with large ground-floors, that can store an infinite amount of knowledge; some librarians, for instance, who know enough of books to help other people, without being able to make much other use of their knowledge, have intellects of this class. Your great working lawyer has two spacious stories; his mind is clear, because his mental floors are large, and he has room to arrange his thoughts so that lie can get at them,facts below, principles above, and all in ordered series; poets are often narrow below, incapable of clear statement, and with small power of consecutive reasoning, but full of light, if sometimes rather bare of furniture, in the attics.

Perhaps I can best describe my experience of doing mathematics in terms of a journey through a dark unexplored mansion. You enter the first room of the mansion and its completely dark. You stumble around bumping into the furniture, but gradually you learn where each piece of furniture is. Finally, after six months or so, you find the light switch, you turn it on, and suddenly its all illuminated. You can see exactly where you were. Then you move into the next room and spend another six months in the dark. So each of these breakthroughs, while sometimes theyre momentary, sometimes over a period of a day or two, they are the culmination ofand couldnt exist withoutthe many months of stumbling around in the dark that proceed them.

Quoted in interview for website for PBS TV Nova program, 'The Proof'.

Science knows no country because knowledge belongs to humanity, and is the torch which illuminates the world. Science is the highest personification of the nation because that nation will remain the first which carries the furthest the works of thought and intelligence.

See with what entire freedom the whaleman takes his handful of lampsoften but old bottles and vials, though. ... He burns, too, the purest of oil. ... It is sweet as early grass butter in April. He goes and hunts for his oil, so as to be sure of its freshness and genuineness, even as the traveler on the prairie hunts up his own supper of game.
[Describing the whale oil lamps that provided copious illumination for the whalemen throughout their ship, which contrasts with the darkness endured by sailors on merchant ships.] 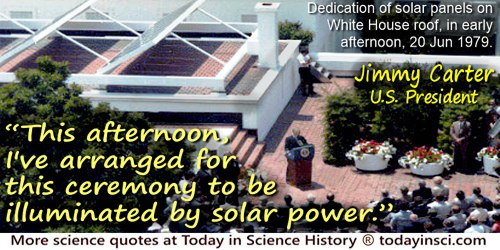 This afternoon, Ive arranged for this ceremony to be illuminated by solar power. [In the early afternoon, on the White House roof, dedicating solar panels installed there.]