A thorough advocate in a just cause, a penetrating mathematician facing the starry heavens, both alike bear the semblance of divinity 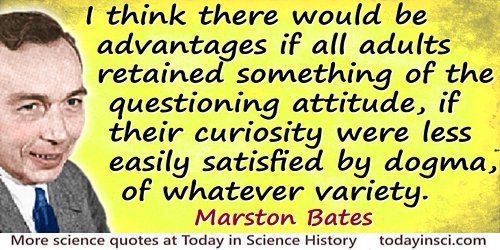 All children are curious and I wonder by what process this trait becomes developed in some and suppressed in others. I suspect again that schools and colleges help in the suppression insofar as they meet curiosity by giving the answers, rather than by some method that leads from narrower questions to broader questions. It is hard to satisfy the curiosity of a child, and even harder to satisfy the curiosity of a scientist, and methods that meet curiosity with satisfaction are thus not apt to foster the development of the child into the scientist. I don't advocate turning all children into professional scientists, although I think there would be advantages if all adults retained something of the questioning attitude, if their curiosity were less easily satisfied by dogma, of whatever variety.

As was the case for Nobel's own invention of dynamite, the uses that are made of increased knowledge can serve both beneficial and potentially harmful ends. Increased knowledge clearly implies increased responsibility. We reject the notion advocated in some quarters that man should stop eating from the tree of knowledge, as if that were humanly possible.

Babbage  gave the name to the [Cambridge] Analytical Society, which he stated was formed to advocate the principles of pure d-ism as opposed to the dot-age of the university.

Happily, facts have become so multiplied, that Geology is daily emerging from that state when an hypothesis, provided it were brilliant and ingenious, was sure of advocates and temporary success, when when it sinned against the laws of physics and the facts themselves.

I am a strong advocate for free thought on all subjects, yet it appears to me (whether rightly or wrongly) that direct arguments against christianity & theism produce hardly any effect on the public; & freedom of thought is best promoted by the gradual illumination of men's minds, which follow[s] from the advance of science. It has, therefore, been always my object to avoid writing on religion, & I have confined myself to science. I may, however, have been unduly biassed by the pain which it would give some members of my family, if I aided in any way direct attacks on religion.

I am among the most durable and passionate participants in the scientific exploration of the solar system, and I am a long-time advocate of the application of space technology to civil and military purposes of direct benefit to life on Earth and to our national security.

In 'Is Human Spaceflight Obsolete?' Quoted in Issues in Science and Technology (Summer 2004).

I have witnessed a most remarkable drama here, one which to me as a German was very unexpected, and quite shocking. I saw the famous M. Lavoisier hold a ceremonial auto-da-fe of phlogiston in the Arsenal. His wife... served as the sacrificial priestess, and Stahl appeared as the advocatus diaboli to defend phlogiston. In the end, poor phlogiston was burned on the accusation of oxygen. Do you not think I have made a droll discovery? Everything is literally true. I will not say whether the cause of phlogiston is now irretrievably lost, or what I think about the issue. But I am glad that this spectacle was not presented in my fatherland.

I would not have it inferred ... that I am, as yet, an advocate for the hypothesis of chemical life. The doctrine of the vitality of the blood, stands in no need of aid from that speculative source. If it did, I would certainly abandon it. For, notwithstanding the fashionableness of the hypothesis in Europe, and the ascendancy it has gained over some minds in this country [USA], it will require stubborn facts to convince me that man with all his corporeal and intellectual attributes is nothing but hydro-phosphorated oxyde of azote ... When the chemist declares, that the same laws which direct the crystallization of spars, nitre and Glauber's salts, direct also the crystallization of man, he must pardon me if I neither understand him, nor believe him.

Im one of the most durable and fervent advocates of space exploration, but my take is that we could do it robotically at far less cost and far greater quantity and quality of results.

No medieval schoolman has been singled out as a precursor more often than the French scholastic Nicole Oresme.This brilliant scholar has been credited with  the framing of Greshams law before Gresham, the invention of analytic geometry before Descartes, with propounding structural theories of compounds before nineteenth century organic chemists, with discovering the law of free fall before Galileo, and with advocating the rotation of the Earth before Copernicus. None of these claims is, in fact, true, although each is based on discussion by Oresme of some penetration and originality

In Nicole Oresme and the Medieval Geometry of Quantities and Motions (1968).

Of the various anesthetics which have been introduced for surgical use, only two deserve to be considered, and in order of preference they are ether and chloroform. In general, there is no comparison between these agents. Ether is so much safer than chloroform that the latter is fast disappearing in practice. In the present rapid progress of science it can not but be a short while until chloroform will only he employed in a very limited number of cases. The estimated death-rate after ether is 1 in 20,000, in chloroform 1 in 3,000. All of the objections to ether by the advocates of chloroform narcosisnamely, its slowness of action, irritation of the respiratory tract, nausea and vomiting, inflammability, extra quantity required, etc.fade into insignificance when brought face to face with the fact that about seven lives are sacrificed by chloroform to one by ether.

The nineteenth century planted the words which the twentieth ripened into the atrocities of Stalin and Hitler. There is hardly an atrocity committed in the twentieth century that was not foreshadowed or even advocated by some noble man of words in the nineteenth.

The physicians surely are the natural advocates of the poor and the social problem largely falls within their scope.

The so-called Marxian dialectic is simply an effort by third-rate men to give an air of profundity to balderdash. Christianity has gone the same way. There are some sound ideas in it, but its advocates always add a lot of preposterous nonsense. The result is theology.

There is no more convincing proof of the truth of a comprehensive theory than its power of absorbing and finding a place for new facts, and its capability of interpreting phenomena which had been previously looked upon as unaccountable anomalies. It is thus that the law of universal gravitation and the undulatory theory of light have become established and universally accepted by men of science. Fact after fact has been brought forward as being apparently inconsistent with them, and one alter another these very facts have been shown to be the consequences of the laws they were at first supposed to disprove. A false theory will never stand this test. Advancing knowledge brings to light whole groups of facts which it cannot deal with, and its advocates steadily decrease in numbers, notwithstanding the ability and scientific skill with which it may have been supported.

From a review of four books on the subject 'Mimicry, and Other Protective Resemblances Among Animals', in The Westminster Review (Jul 1867), 88, 1. Wallace is identified as the author in the article as reprinted in William Beebe, The Book of Naturalists: An Anthology of the Best Natural History (1988), 108.