Cheetah genes cooperate with cheetah genes but not with camel genes, and vice versa. This is not because cheetah genes, even in the most poetic sense, see any virtue in the preservation of the cheetah species. They are not working to save the cheetah from extinction like some molecular World Wildlife Fund.

From Unweaving the Rainbow: Science, Delusion, and the Appetite for Wonder (1998), 218.

Each time one of the medicine men dies, it's as if a library has burned down.
{Referring to potential knowledge from indiginous peoples of the medicinal value of tropical plants, speaking as director of the plant program of the World Wildlife Fund and having spent many months living with the Tirio tribe on the Suriname-Brazil border.]

Every hour a scientist spends trying to raise funds is an hour lost from important thought and research.

Epigraph in Isaac Asimovs Book of Science and Nature Quotations (1988), 287.

First, the chief character, who is supposed to be a professional astronomer, spends his time fund raising and doing calculations at his desk, rather than observing the sky. Second, the driving force of a scientific project is institutional self-aggrandizement rather than intellectual curiosity.
[About the state of affairs in academia.]

In Marc J. Madou, Fundamentals of Microfabrication: the Science of Miniaturization (2nd ed., 2002), 535

If the NSF had never existed, if the government had never funded American mathematics, we would have half as many mathematicians as we now have, and I don't see anything wrong with that.

In addition, the oil royalties the Federal Government does not collect from big oil will starve the Land and Water Conservation Fund of critical financial resources.

In physical science  whatever knowledge is once gained forms a lasting fund for afterages to inherit and trade with.

Co-author with his brother Augustus William Hare Guesses At Truth, By Two Brothers: Second Edition: With Large Additions (1848), Second Series, 13. (The volume is introduced as more than three fourths new. This quote is identified as by Julius; Augustus had died in 1833.)

It is folly to use as one's guide in the selection of fundamental science the criterion of utility. Not because (scientists)... despise utility. But because. .. useful outcomes are best identified after the making of discoveries, rather than before.
Concerning the allocation of research funds.

Speech to the Canadian Society for the Weizmann Institute of Science, Toronto (2 Jun 1996)

Science is a capital or fund perpetually reinvested; it accumulates, rolls up, is carried forward by every new man. Every man of science has all the science before him to go upon, to set himself up in business with. What an enormous sum Darwin availed himself of and reinvested! Not so in literature; to every poet, to every artist, it is still the first day of creation, so far as the essentials of his task are concerned. Literature is not so much a fund to be reinvested as it is a crop to be ever new-grown.

Science is organized knowledge; and before knowledge can be organized, some of it must first be possessed. Every study, therefore, should have a purely experimental introduction; and only after an ample fund of observations has been accumulated, should reasoning begin.

We have vastly increased the amount of funding that is available for conservation partnerships. 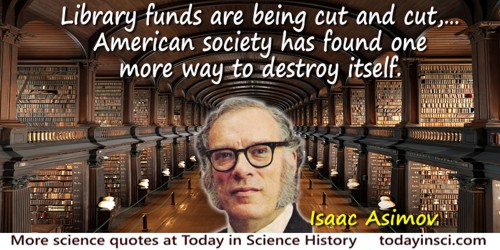 When I read about the way in which library funds are being cut and cut, I can only think that the door is closing and that American society has found one more way to destroy itself.

[Receiving a university scholarship] was fundamentally important to me, to be able to afford going to school, and I still believe so strongly in the value of public education and state-funded universities.