As geology is essentially a historical science, the working method of the geologist resembles that of the historian. This makes the personality of the geologist of essential importance in the way he analyzes the past.

Cheetah genes cooperate with cheetah genes but not with camel genes, and vice versa. This is not because cheetah genes, even in the most poetic sense, see any virtue in the preservation of the cheetah species. They are not working to save the cheetah from extinction like some molecular World Wildlife Fund.

From Unweaving the Rainbow: Science, Delusion, and the Appetite for Wonder (1998), 218.

For many of us, water simply flows from a faucet, and we think little about it beyond this point of contact. We have lost a sense of respect for the wild river, for the complex workings of a wetland, for the intricate web of life that water supports.

For me, physics cultivates a perpetual state of wonder about the limits of thoughts, the workings of the universe, and our place in the vast space-time landscape that we call home.

Closing sentence of 'Introduction', The Physics Book: From Olbersâ€™ Paradox to SchrĂ¶dingerâ€™s Cat: From the Big Bang to Quantum Resurrection, 250 Milestones in the History of Physics (2011), 15.

Genetics as a whole is the great over-hyped science, and geneticists know that even if they don't say it. All that genetics really is is anatomy plus an enormous research group grant. It's what anatomists did in the fifteenth century-looking at the heart and seeing how it worked. Now, we are doing the same with DNA

Half a century ago Oswald (1910) distinguished classicists and romanticists among the scientific investigators: the former being inclined to design schemes and to use consistently the deductions from working hypotheses; the latter being more fit for intuitive discoveries of functional relations between phenomena and therefore more able to open up new fields of study. Examples of both character types are Werner and Hutton. Werner was a real classicist. At the end of the eighteenth century he postulated the theory of â€śneptunism,â€ť according to which all rocks including granites, were deposited in primeval seas. It was an artificial scheme, but, as a classification system, it worked quite satisfactorily at the time. Hutton, his contemporary and opponent, was more a romanticist. His concept of â€śplutonismâ€ť supposed continually recurrent circuits of matter, which like gigantic paddle wheels raise material from various depths of the earth and carry it off again. This is a very flexible system which opens the mind to accept the possible occurrence in the course of time of a great variety of interrelated plutonic and tectonic processes.

If, for example, I had some idea, which, as it turned out would, say, be quite wrong, was going off of the tangent, Watson would tell me in no uncertain terms this was nonsense, and vice-versa. If he had some idea I didnâ€™t like and I would say so and this would shake his thinking about it and draw him back again. And in fact, itâ€™s one of the requirements for collaboration of this sort that you must be perfectly candid, one might almost say rude, to the person you are working with. Itâ€™s useless, working with somebody whoâ€™s either much too junior than yourself, or much too senior, because then politeness creeps in. And this is the end of all real collaboration in science. 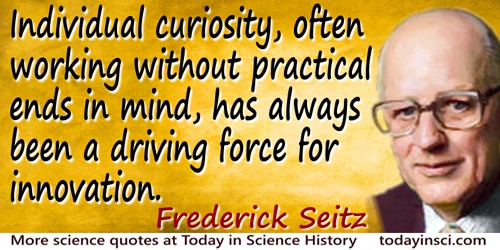 Individual curiosity, often working without practical ends in mind, has always been a driving force for innovation.

My [algebraic] methods are really methods of working and thinking; this is why they have crept in everywhere anonymously.

Letter to H. Hasse (1931). As quoted in Israel Kleiner, A History of Abstract Algebra (2007), 100. The author used the quote to remark on Noetherâ€™s widespread influence, either directly or indirectly, for the introduction of algebra (her specialty) or its terminology into a variety of mathematical fields in the twentieth century.

Research has deserted the individual and entered the group. The individual worker find the problem too large, not too difficult. He must learn to work with others.

Srinivasa Ramanujan was the strangest man in all of mathematics, probably in the entire history of science. He has been compared to a bursting supernova, illuminating the darkest, most profound corners of mathematics, before being tragically struck down by tuberculosis at the age of 33... Working in total isolation from the main currents of his field, he was able to rederive 100 yearsâ€™ worth of Western mathematics on his own. The tragedy of his life is that much of his work was wasted rediscovering known mathematics.

In Hyperspace:A Scientific Odyssey through Parallel Universes, Time Warps, and the Tenth Dimension (1994), 172.

Stem cells are probably going to be extremely useful. But it isnâ€™t a given, and even if it were, I donâ€™t think the end justifies the means. I am not against stem cells, I think itâ€™s great. Blanket objection is not very reasonable to meâ€”any effort to control scientific advances is doomed to fail. You cannot stop the human mind from working.

The functional validity of a working hypothesis is not a priori certain, because often it is initially based on intuition. However, logical deductions from such a hypothesis provide expectations (so-called prognoses) as to the circumstances under which certain phenomena will appear in nature. Such a postulate or working hypothesis can then be substantiated by additional observations ... The author calls such expectations and additional observations the prognosis-diagnosis method of research. Prognosis in science may be termed the prediction of the future finding of corroborative evidence of certain features or phenomena (diagnostic facts). This method of scientific research builds up and extends the relations between the subject and the object by means of a circuit of inductions and deductions.

The history of civilization proves beyond doubt just how sterile the repeated attempts of metaphysics to guess at natureâ€™s laws have been. Instead, there is every reason to believe that when the human intellect ignores reality and concentrates within, it can no longer explain the simplest inner workings of lifeâ€™s machinery or of the world around us.

The McCarthy period came along â€¦ and many of the other scientists who had been working on these same lines gave up. Probably saying â€śWhy should I sacrifice myself? I am a scientist, I am supposed to be working on scientific things, so I donâ€™t need to put myself at risk by talking about these possibilities.â€ť And I have said that perhaps Iâ€™m just stubbornâ€¦ I have said â€śI donâ€™t like anybody to tell me what to do or to think, except Mrs. Pauling.â€ť

From interview (11 Nov 1990) with Wayne Reynolds, website of the American Academy of Achievement.

The universe, as we see it, is the result of regularly working forces, having a causal connection with each other and therefore capable of being understood by human reason.

From Force and Matter: Or, Principles of the Natural Order of the Universe (1884), Preface to the 15th edition, x.

The work of the inventor consists of conceptualizing, combining, and ordering what is possible according to the laws of nature. This inner working out which precedes the external has a twofold characteristic: the participation of the subconscious in the inventing subject; and that encounter with an external power which demands and obtains complete subjugation, so that the way to the solution is experienced as the fitting of one's own imagination to this power.

There was positive, clear-cut, unquestioned direction of the project at all levels. Authority was invariably delegated with responsibility, and this delegation was absolute and without reservation. Only in this way could the many apparently autonomous organizations working on the many apparently independent tasks be pulled together to achieve our final objective.

Well, we have frankly enjoyed more than anything these secret workings of natures.

You have chosen the most fascinating and dynamic profession there is, a profession with the highest potential for greatness, since the physicianâ€™s daily work is wrapped up in the subtle web of history. Your labors are linked with those of your colleagues who preceded you in history, and those who are now working all over the world. It is this spiritual unity with our colleagues of all periods and all countries that has made medicine so universal and eternal. For this reason we must study and try to imitate the lives of the â€śGreat Doctorsâ€ť of history.

epilogue to A Prelude to Medical History

[I] could see how nervous everybody was in the beginning and how silent it was when we had trouble with the artificial heart [during the surgery, but later in the operation, when it was working, there were moments] of loud and raucous humor.
[Commenting after reviewing the video tape of the world's first human implantation of an artificial heart.]