A natural law regulates the advance of science. Where only observation can be made, the growth of knowledge creeps; where laboratory experiments can be carried on, knowledge leaps forward.
[Attributed, probably incorrectly]

Seen in various places, but Webmaster has found none with a source citation, and doubts the authenticity, because none found with attribution to Faraday prior to 1950. The earliest example Webmaster found is in 1929, by Walter Morley Fletcher in his Norman Lockyer Lecture. He refers to it as a truism, without mention of Faraday. He says law of our state of being rather than natural law. See the Walter Morley Fletcher page for more details.

Even more difficult to explain, than the breaking-up of a single mass into fragments, and the drifting apart of these blocks to form the foundations of the present-day continents, is the explanation of the original production of the single mass, or PANGAEA, by the concentration of the former holosphere of granitic sial into a hemisphere of compressed and crushed gneisses and schists. Creep and the effects of compression, due to shrinking or other causes, have been appealed to but this is hardly a satisfactory explanation. The earth could no more shrug itself out of its outer rock-shell unaided, than an animal could shrug itself out of its hide, or a man wriggle out of his skin, or even out of his closely buttoned coat, without assistance either of his own hands or those of others.

If, for example, I had some idea, which, as it turned out would, say, be quite wrong, was going off of the tangent, Watson would tell me in no uncertain terms this was nonsense, and vice-versa. If he had some idea I didnt like and I would say so and this would shake his thinking about it and draw him back again. And in fact, its one of the requirements for collaboration of this sort that you must be perfectly candid, one might almost say rude, to the person you are working with. Its useless, working with somebody whos either much too junior than yourself, or much too senior, because then politeness creeps in. And this is the end of all real collaboration in science.

In not a few the [opium-eating] habit has crept upon them almost unconsciously, during the medicinal use of opiates to soothe pain, to remove sleeplessness, or to arrest protracted bowel-complaint. The risk of this evil should therefore be carefully borne in mind, for life-long misery has often been caused by undue laxity in the prescribing of opiates.

It is slower, but better, to creep along the downward path that to leap over the cliff.

Aphorism as given by the fictional character Dezhnev Senior, in Fantastic Voyage II: Destination Brain (1987), 144.

Looking back across the long cycles of change through which the land has been shaped into its present form, let us realise that these geographical revolutions are not events wholly of the dim past, but that they are still in progress. So slow and measured has been their march, that even from the earliest times of human history they seem hardly to have advanced at all. But none the less are they surely and steadily transpiring around us. In the fall of rain and the flow of rivers, in the bubble of springs and the silence of frost, in the quiet creep of glaciers and the tumultuous rush of ocean waves, in the tremor of the earthquake and the outburst of the volcano, we may recognise the same play of terrestrial forces by which the framework of the continents has been step by step evolved.

Never in its life has the sun seen shade,
Never in its life seen a shadow where it falls:
There, always there, in the sun-swept glade,
It lurks below the leaf; behind bodies, under walls,
Creeps, clings, hides. Be it millions, be it one
The sun sees no shadow, and no shadow sees the sun.

Nowadays most people die of a sort of creeping common sense, and discover when it is too late that the only things one never regrets are ones mistakes.

One can never consent to creep when one feels an impulse to soar.

One cannot consent to creep when one has an impulse to soar.

Science moves, but slowly, slowly, creeping on from point to point. ...
Yet I doubt not through the ages one increasing purpose runs,
And the thoughts of men are widened with the process of the suns.
Knowledge comes, but wisdom lingers

That small word “Force,” they make a barber's block,
Ready to put on
Meanings most strange and various, fit to shock
Pupils of Newton....
The phrases of last century in this
Linger to play tricks—
Vis viva and Vis Mortua and Vis Acceleratrix:—
Those long-nebbed words that to our text books still
Cling by their titles,
And from them creep, as entozoa will,
Into our vitals.
But see! Tait writes in lucid symbols clear
One small equation;
And Force becomes of Energy a mere
Space-variation.

'Report on Tait's Lecture on Force:— B.A., 1876', reproduced in Bruce Clarke, Energy Forms: Allegory and Science in the Era of Classical Thermodynamics (2001), 19. Maxwell's verse was inspired by a paper delivered at the British Association (B.A.. He was satirizing a “considerable cofusion of nomenclature” at the time, and supported his friend Tait's desire to establish a redefinition of energy on a thermnodynamic basis. 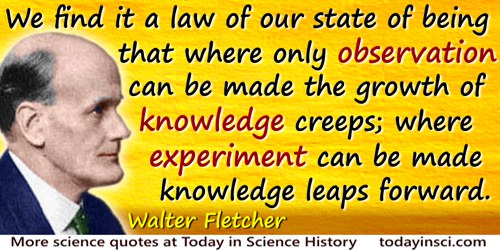 We find it a law of our state of being that where only observation can be made the growth of knowledge creeps; where experiment can be made knowledge leaps forward.

From Norman Lockyer Lecture delivered before the British Science Guild (19 Nov 1929), 'Medical Research: The Tree and the Fruit', in The British Medical Journal (30 Nov 1929), Vol. 2, No. 3595, 995. Fletcher introduces this statement as a truism, without mention of any prior person saying it. Yet it is very similar to a quote often seen, perhaps incorrectly, as a quote attributed to Michael Faraday: A natural law regulates the advance of science. Where only observation can be made, the growth of knowledge creeps; where laboratory experiments can be carried on, knowledge leaps forward. Webmaster has found no instance of this quote being made prior to 1929, which raises the suspicion that Faraday did not originate it  else why is it not easily found in his written work or quoted in a book in all the years since his time? If you know a primary source linking it to Faraday, please contact Webmaster.