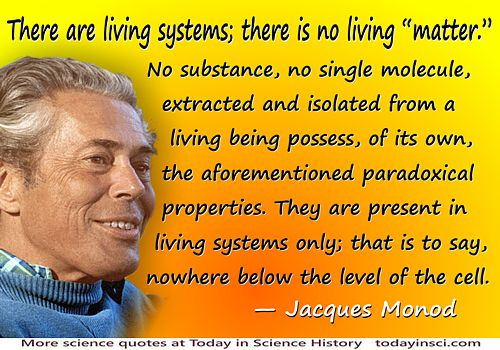 Almost all aspects of life are engineered at the molecular level, and without understanding molecules we can only have a very sketchy understanding of life itself.

Among the studies to which the [Rockefeller] Foundation is giving support is a series in a relatively new field, which may be called molecular biology, in which delicate modern techniques are being used to investigate ever more minute details of certain life processes. 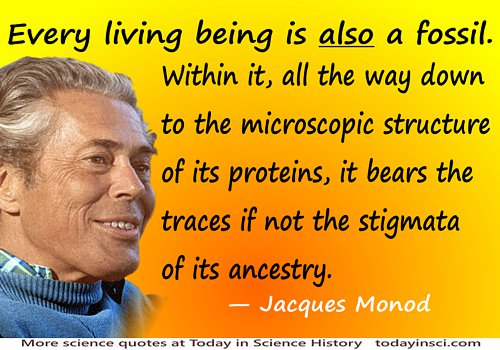 Every living being is also a fossil. Within it, all the way down to the microscopic structure of its proteins, it bears the traces if not the stigmata of its ancestry.

In Jacques Monod and Austryn Wainhouse (trans.), Chance and Necessity: An Essay on the Natural Philosophy of Modern Biology (1972), 160.

Few scientists acquainted with the chemistry of biological systems at the molecular level can avoid being inspired. Evolution has produced chemical compounds exquisitely organized to accomplish the most complicated and delicate of tasks. Many organic chemists viewing crystal structures of enzyme systems or nucleic acids and knowing the marvels of specificity of the immune systems must dream of designing and synthesizing simpler organic compounds that imitate working features of these naturally occurring compounds.

Finally one should add that in spite of the great complexity of protein synthesis and in spite of the considerable technical difficulties in synthesizing polynucleotides with defined sequences it is not unreasonable to hope that all these points will be clarified in the near future, and that the genetic code will be completely established on a sound experimental basis within a few years.

I also suspect that many workers in this field [molecular biology] and related fields have been strongly motivated by the desire, rarely actually expressed, to refute vitalism.

I have always tried to fit knowledge that I acquired into my understanding of the world.  When something comes along that I dont understand, that I cant fit in, that bothers me, I think about it, mull over it, and perhaps ultimately do some work with it. Thats perhaps the reason that Ive been able to make discoveries in molecular biology.

It is now widely realized that nearly all the classical problems of molecular biology have either been solved or will be solved in the next decade. The entry of large numbers of American and other biochemists into the field will ensure that all the chemical details of replication and transcription will be elucidated. Because of this, I have long felt that the future of molecular biology lies in the extension of research to other fields of biology, notably development and the nervous system.

Molecular biology is essentially the practice of biochemistry without a license.

My own prejudices are exactly the opposite of the functionalists: If you want to understand function, study structure. I was supposed to have said in my molecular biology days. (I believe I was sailing at the time.)

My own thinking (and that of many of my colleagues) is based on two general principles, which I shall call the Sequence Hypothesis and the Central Dogma. The direct evidence for both of them is negligible, but I have found them to be of great help in getting to grips with these very complex problems. I present them here in the hope that others can make similar use of them. Their speculative nature is emphasized by their names. It is an instructive exercise to attempt to build a useful theory without using them. One generally ends in the wilderness.
The Sequence Hypothesis
This has already been referred to a number of times. In its simplest form it assumes that the specificity of a piece of nucleic acid is expressed solely by the sequence of its bases, and that this sequence is a (simple) code for the amino acid sequence of a particular protein...
The Central Dogma
This states that once 'information' has passed into protein it cannot get out again. In more detail, the transfer of information from nucleic acid to nucleic acid, or from nucleic acid to protein may be possible, but transfer from protein to protein, or from protein to nucleic acid is impossible. Information means here the precise determination of sequence, either of bases in the nucleic acid or of amino acid residues in the protein. This is by no means universally heldSir Macfarlane Burnet, for example, does not subscribe to itbut many workers now think along these lines. As far as I know it has not been explicitly stated before.

'On Protein Synthesis', Symposia of the Society for Experimental Biology: The Biological Replication of Macromolecules, 1958, 12, 152-3.

One can say, looking at the papers in this symposium, that the elucidation of the genetic code is indeed a great achievement. It is, in a sense, the key to molecular biology because it shows how the great polymer languages, the nucleic acid language and the protein language, are linked together.

Possibly the most pregnant recent development in molecular biology is the realization that the beginnings of life are closely associated with the interactions of proteins and nucleic acids.

'X-ray and Related Studies of the Structure of the Proteins and Nucleic Acids', PhD Thesis, University of Leeds (1939), 63. As quoted in Robert Cecil Olby, The Path to the Double Helix: The Discovery of DNA (1974), 70. 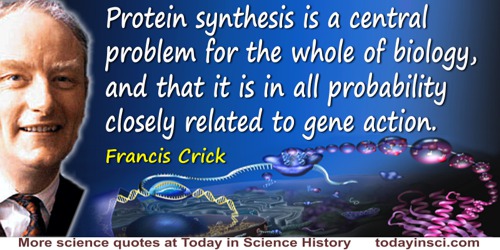 Protein synthesis is a central problem for the whole of biology, and that it is in all probability closely related to gene action.

'On Protein Synthesis', Symposia of the Society for Experimental Biology: The Biological Replication of Macromolecules, 1958, 12, 160.

The central dogma, enunciated by Crick in 1958 and the keystone of molecular biology ever since, is likely to prove a considerable over-simplification. That is the heretical but inescapable conclusion stemming from experiments done in the past few months in two laboratories in the United States.

The major credit I think Jim and I deserve  is for selecting the right problem and sticking to it. Its true that by blundering about we stumbled on gold, but the fact remains that we were looking for gold. Both of us had decided, quite independently of each other, that the central problem in molecular biology was the chemical structure of the gene.  We could not see what the answer was, but we considered it so important that we were determined to think about it long and hard, from any relevant point of view.

The possibility that the infective agent may not contain nucleic acid and consist only of a peptide or peptide-polysaccharide complex which has replication properties within susceptible cells is intriguing. If peptides, short-chain proteins, or peptide/fatty-acid/ polysaccharide complexes activate nucleic-acid template activity in the host genes to produce identical infective particles, this would invalidate the accepted dogma of present-day molecular biology in which D.N.A. and R.N.A. templates control all biological activity.

The realization of the role played by DNA has had absolutely no consequence for either therapy or prevention. Treatments for cancer remain today what they were before molecular biology was ever thought of: cut it out, burn it out, or poison it.

From review, 'Billions and Billions of Demons', of the book, The Demon-Haunted World: Science as a Candle in the Dark, by Carl Sagan, in New York Review of Books (9 Jan 1997).

The techniques have galloped ahead of the concepts. We have moved away from studying the complexity of the organism; from processes and organisation to composition.
[Commenting that growing use of new technologies and techniques, from molecular biology to genomics, has proved a mixed blessing.]

There are living systems; there is no living matter. No substance, no single molecule, extracted and isolated from a living being possess, of its own, the aforementioned paradoxical properties. They are present in living systems only; that is to say, nowhere below the level of the cell.

We are at the dawn of a new era, the era of molecular biology as I like to call it, and there is an urgency about the need for more intensive application of physics and chemistry, and specially of structure analysis, that is still not sufficiently appreciated.

'On the Structure of Biological Fibres and the Problem of Muscle', Proceedings of the Royal Society of London, 1947, 134, 326.

[Molecular biology] is concerned particularly with the forms of biological molecules and with the evolution, exploitation and ramification of these forms in the ascent to higher and higher levels of organisation. Molecular biology is predominantly three-dimensional and structuralwhich does not mean, however, that it is merely a refinement of morphology. It must at the same time inquire into genesis and function.

From Harvey lecture (1951). As cited by John Law in 'The Case of X-ray Protein Crystallography', collected in Gerard Lemaine (ed.), Perspectives on the Emergence of Scientific Disciplines, 1976, 141.