As for types like my own, obscurely motivated by the conviction that our existence was worthless if we didnt make a turning point of it, we were assigned to the humanities, to poetry, philosophy, paintingthe nursery games of humankind, which had to be left behind when the age of science began. The humanities would be called upon to choose a wallpaper for the crypt, as the end drew near.

I also suspect that many workers in this field [molecular biology] and related fields have been strongly motivated by the desire, rarely actually expressed, to refute vitalism. 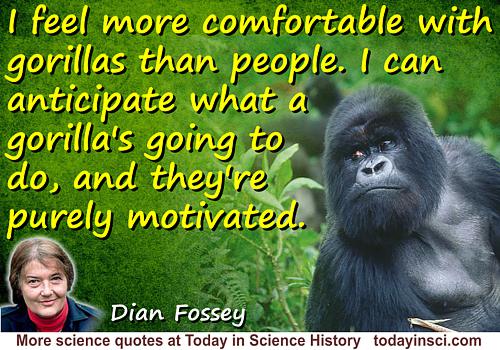 It is imperative in the design process to have a full and complete understanding of how failure is being obviated in order to achieve success. Without fully appreciating how close to failing a new design is, its own designer may not fully understand how and why a design works. A new design may prove to be successful because it has a sufficiently large factor of safety (which, of course, has often rightly been called a “factor of ignorance”), but a design's true factor of safety can never be known if the ultimate failure mode is unknown. Thus the design that succeeds (ie, does not fail) can actually provide less reliable information about how or how not to extrapolate from that design than one that fails. It is this observation that has long motivated reflective designers to study failures even more assiduously than successes.

In Design Paradigms: Case Histories of Error and Judgment in Engineering (1994), 31. books.google.comHenry Petroski - 1994

Its not for glory that Soviet cosmonauts are in this assault on the cosmos; they are motivated by a limitless love for and devotion to their country, the Party and the people, and by a desire to help Soviet scientists to discover the secrets of the universe.

Never depend upon institutions or government to solve any problem. All social movements are founded by, guided by, motivated and seen through by the passion of individuals.

As quoted, without citation, in David Suzuki and Holly Dressel , From Naked Ape to Superspecies: Humanity and the Global Eco-Crisis (1999, 2009), 347.

The intellectual craves a social order in which uncommon people perform uncommon tasks every day. He wants a society throbbing with dedication, reverence, and worshiHe sees it as scandalous that the discoveries of science and the feats of heroes should have as their denouement the comfort and affluence of common folk. A social order run by and for the people is to him a mindless organism motivated by sheer physiologism.

The tragedy of deforestation in Amazonia as well as elsewhere in the tropics is that its costs, in... economic, social, cultural, and aesthetic terms, far outweigh its benefits. In many cases, destruction of the regions rainforests is motivated by short-term gains rather than the long-term productive capacity of the land. And, as a result, deforestation usually leaves behind landscapes that are economically as well as ecologically impoverished.

From Anthony Bennett Anderson (ed.), Alternatives to Deforestation: Steps Toward Sustainable Use of the Amazon Rain Forest (1990), xi. As cited in Lykke E. Andersen (ed.), The Dynamics of Deforestation and Economic Growth in the Brazilian Amazon (2002), 2.

We have corrupted the term research to mean study and experiment and development toward selected objectives, and we have even espoused secret and classified projects. This was not the old meaning of university research. We need a new term, or the revival of a still older one, to refer to the dedicated activities of the scholar, the intensive study of special aspects of a subject for its own sake, motivated by the love of knowledge and truth.

In 'Technology and National Research Policy', Bulletin of the Atomic Scientists (Oct 1953), 292.

When we are motivated by goals that have deep meaning, by dreams that need completion, by pure love that needs expressing, then we truly live life.