A science which does not bring us nearer to God is worthless.

As for types like my own, obscurely motivated by the conviction that our existence was worthless if we didnâ€™t make a turning point of it, we were assigned to the humanities, to poetry, philosophy, paintingâ€”the nursery games of humankind, which had to be left behind when the age of science began. The humanities would be called upon to choose a wallpaper for the crypt, as the end drew near.

Everything that is written merely to please the author is worthless.

Quoted without citation in W.H. Auden and L. Kronenberger (eds.) The Viking Book of Aphorisms (1966), 279. Webmaster has tried without success to locate a primary source. Can you help?

Generality of points of view and of methods, precision and elegance in presentation, have become, since Lagrange, the common property of all who would lay claim to the rank of scientific mathematicians. And, even if this generality leads at times to abstruseness at the expense of intuition and applicability, so that general theorems are formulated which fail to apply to a single special case, if furthermore precision at times degenerates into a studied brevity which makes it more difficult to read an article than it was to write it; if, finally, elegance of form has well-nigh become in our day the criterion of the worth or worthlessness of a proposition,â€”yet are these conditions of the highest importance to a wholesome development, in that they keep the scientific material within the limits which are necessary both intrinsically and extrinsically if mathematics is not to spend itself in trivialities or smother in profusion.

Grant us a brief delay; impulse in everything is but a worthless servant.

I am more fond of achieving than striving. My theories must prove to be facts or be discarded as worthless. My efforts must soon be crowned with success, or discontinued.

The Rest of My Life, ch. 4 (1937).Wells wrote, in addition to other works, the popular 'Fleming Stone' detective series.

I heard long ago in the Army: Plans are worthless, but planning is everything.

From Speech (14 Nov 1957) to the National Defense Executive Reserve Conference, Washington, D.C., in Public Papers of the Presidents of the United States, Dwight D. Eisenhower, 1957 (1999), 818. Note that this is often seen attributed to Eisenhauer, without the introductory clause. Thus, it is not his original idea, though it may be his wording of it. 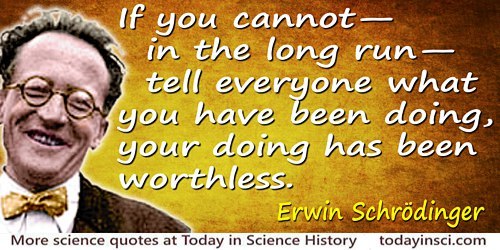 If you cannotâ€”in the long runâ€”tell everyone what you have been doing, your doing has been worthless.

Concluding remark of the first of four public lectures for the Dublin Institute for Advanced Studies at University College, Dublin (Feb 1950), 'The Spiritual Bearing of Science on Life', collected in Science and Humanism: Physics in Our Time (1951). Reprinted in 'Nature and the Greeks' and 'Science and Humanism' (1996), 112.

In Mathematics, censorship and criticism can not be allowed to everyone; the speeches of the rhetoricians and the defenses of the lawyers are worthless.

In the 1920s, there was a dinner at which the physicist Robert W. Wood was asked to respond to a toast â€¦ â€śTo physics and metaphysics.â€ť Now by metaphysics was meant something like philosophyâ€”truths that you could get to just by thinking about them. Wood took a second, glanced about him, and answered along these lines: The physicist has an idea, he said. The more he thinks it through, the more sense it makes to him. He goes to the scientific literature, and the more he reads, the more promising the idea seems. Thus prepared, he devises an experiment to test the idea. The experiment is painstaking. Many possibilities are eliminated or taken into account; the accuracy of the measurement is refined. At the end of all this work, the experiment is completed and â€¦ the idea is shown to be worthless. The physicist then discards the idea, frees his mind (as I was saying a moment ago) from the clutter of error, and moves on to something else. The difference between physics and metaphysics, Wood concluded, is that the metaphysicist has no laboratory.

Is any knowledge worthless? Try to think of an example.

It seems to me what is called for is an exquisite balance between two conflicting needs: the most skeptical scrutiny of all hypotheses that are served up to us and at the same time a great openness to new ideas â€¦ If you are only skeptical, then no new ideas make it through to you â€¦ On the other hand, if you are open to the point of gullibility and have not an ounce of skeptical sense in you, then you cannot distinguish the useful ideas from the worthless ones.

Mere knowledge is comparatively worthless unless digested into practical wisdom and common sense as applied to the affairs of life.

As quoted, without citation, in John Walker, A Fork in the Road: Answers to Daily Dilemmas from the Teachings of Jesus Christ (2005), 71.

On Sept 15th [1852] Mr Goulburn, Chancellor of the Exchequer, asked my opinion on the utility of Mr Babbage's calculating machine, and the propriety of spending further sums of money on it. I replied, entering fully into the matter, and giving my opinion that it was worthless.

Several of my young acquaintances are in their graves who gave promise of making happy and useful citizens and there is no question whatever that cigarettes alone were the cause of their destruction. No boy living would commence the use of cigarettes if he knew what a useless, soulless, worthless thing they would make of him.

There must be some one quality without which a work of art cannot exist; possessing which, in the least degree, no work is altogether worthless.

To render aid to the worthless is sheer waste. Rain does not freshen the Dead Sea, but only enables it to dissolve more salt.

We are living in an age of awesome agricultural enterprise that needs to be interpreted. We find our simple faith in science dominated by the Religion of PhDeism under the reign of Data; so narrow in people and often so meaningless in context as to be worthless to the scientific farmer.

Letter to Joshua Lederberg (19 Apr 1970), Joshua Lederberg papers, National Library of Medicine (online). Hildebrand was a response to a Lederberg's letter published in the Washington Post (18 Apr 1970) about 'Ecology Has All Requisites of an Authentic Religion.' Note that Sam Murchid claimed this term PhDeism in another context in his diaries (as seen in diaries of 1964 and others). 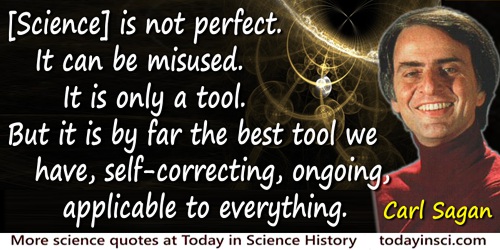 [Science] is not perfect. It can be misused. It is only a tool. But it is by far the best tool we have, self-correcting, ongoing, applicable to everything. It has two rules. First: there are no sacred truths; all assumptions must be critically examined; arguments from authority are worthless. Second: whatever is inconsistent with the facts must be discarded or revised. ... The obvious is sometimes false; the unexpected is sometimes true.

~~[Attributed]~~ That theory is worthless. It isnâ€™t even wrong!

Probably a feral variant of â€śThis isnâ€™t right. This isnâ€™t even wrong,â€ť which can only be cited as â€śAttributed,â€ť since there is no known primary source.