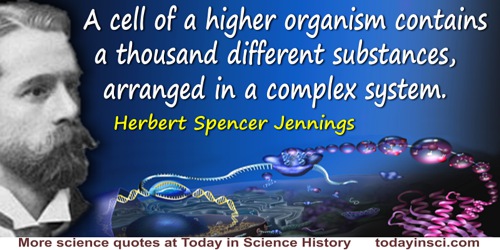 A cell of a higher organism contains a thousand different substances, arranged in a complex system. This great organized system was not discovered by chemical or physical methods; they are inadequate to its refinement and delicacy and complexity.

Chess is a unique cognitive nexus, a place where art and science come together in the human mind and are then refined and improved by experience.

In How Life Imitates Chess: Making the Right Moves, from the Board to the Boardroom (2007), 4.

Gynaecologists are very smooth indeed. Because they have to listen to woeful and sordid symptoms they develop an expression of refinement and sympathy.

I think chemistry is being frittered away by the hairsplitting of the organic chemists; we have new compounds discovered, which scarcely differ from the known ones and when discovered are valueless—very illustrations perhaps of their refinements in analysis, but very little aiding the progress of true science.

If elephants didnt exist, you couldnt invent one. They belong to a small group of living things so unlikely they challenge credulity and common sense. Compared to them, we are primitive, hanging on to a stubborn, unspecialized, five-fingered state, clever but destructive. They are models of refinement, natures archangels, the oldest and largest land mammals, touchstones to our imagination

If the national park idea is, as Lord Bryce suggested, the best idea America ever had, wilderness preservation is the highest refinement of that idea.

In the 1920s, there was a dinner at which the physicist Robert W. Wood was asked to respond to a toast  To physics and metaphysics. Now by metaphysics was meant something like philosophytruths that you could get to just by thinking about them. Wood took a second, glanced about him, and answered along these lines: The physicist has an idea, he said. The more he thinks it through, the more sense it makes to him. He goes to the scientific literature, and the more he reads, the more promising the idea seems. Thus prepared, he devises an experiment to test the idea. The experiment is painstaking. Many possibilities are eliminated or taken into account; the accuracy of the measurement is refined. At the end of all this work, the experiment is completed and  the idea is shown to be worthless. The physicist then discards the idea, frees his mind (as I was saying a moment ago) from the clutter of error, and moves on to something else. The difference between physics and metaphysics, Wood concluded, is that the metaphysicist has no laboratory.

Science, then, is the attentive consideration of common experience; it is common knowledge extended and refined. Its validity is of the same order as that of ordinary perception; memory, and understanding. Its test is found, like theirs, in actual intuition, which sometimes consists in perception and sometimes in intent. The flight of science is merely longer from perception to perception, and its deduction more accurate of meaning from meaning and purpose from purpose. It generates in the mind, for each vulgar observation, a whole brood of suggestions, hypotheses, and inferences. The sciences bestow, as is right and fitting, infinite pains upon that experience which in their absence would drift by unchallenged or misunderstood. They take note, infer, and prophesy. They compare prophesy with event, and altogether they supplyso intent are they on realityevery imaginable background and extension for the present dream.

Scientific method, although in its more refined forms it may seem complicated, is in essence remarkably simply. It consists in observing such facts as will enable the observer to discover general laws governing facts of the kind in question. The two stages, first of observation, and second of inference to a law, are both essential, and each is susceptible of almost indefinite refinement. (1931)

The latest refinements of science are linked with the cruelties of the Stone Age.

The physicist cannot simply surrender to the philosopher the critical contemplation of the theoretical foundations for he himself knows best and feels most surely where the shoe pinches.  he must try to make clear in his own mind just how far the concepts which he uses are justified  The whole of science is nothing more than a refinement of everyday thinking. It is for this reason that the critical thinking of the physicist cannot possibly be restricted by the examination of the concepts of his own specific field. He cannot proceed without considering critically a much more difficult problem, the problem of analyzing the nature of everyday thinking.

The progress of civilization consists merely in the multiplication and refinement of human wants.

Statement prepared for a dinner-symposium on 'Previews of Industrial Progress in the Next century', held in Chicago (25 May 1935), the evening preceding the reopening of the Century of Progress Exposition. In Alfred P. Sloan, Jr., 'Science and Industry in the Coming Century', The Scientific Monthly (Jul 1934), 39, No. 1, 75. Also in Address (20 Apr 1939) at a dinner of the Merchants and Manufacturers celebrating the opening of the New York Worlds Fair, as Civilization consists in the multiplication and refinement of human wants. Collected in Representative American Speeches (1939), 13, No. 3, 193.

The whole of science is nothing more than a refinement of everyday thinking.

When I use the phrase Cosmic Facts, the reader is asked not to assume too rigid a meaning for the word facts; what is considered factual today is tomorrow recognized as capable of further refinement.

[Molecular biology] is concerned particularly with the forms of biological molecules and with the evolution, exploitation and ramification of these forms in the ascent to higher and higher levels of organisation. Molecular biology is predominantly three-dimensional and structuralwhich does not mean, however, that it is merely a refinement of morphology. It must at the same time inquire into genesis and function.

From Harvey lecture (1951). As cited by John Law in 'The Case of X-ray Protein Crystallography', collected in Gerard Lemaine (ed.), Perspectives on the Emergence of Scientific Disciplines, 1976, 141.