A man may be in as just possession of truth as of a city, and yet be forced to surrender.

As far as I see, such a theory [of the primeval atom] remains entirely outside any metaphysical or religious question. It leaves the materialist free to deny any transcendental Being. He may keep, for the bottom of space-time, the same attitude of mind he has been able to adopt for events occurring in non-singular places in space-time. For the believer, it removes any attempt to familiarity with God, as were Laplaces chiquenaude or Jeans finger. It is consonant with the wording of Isaiah speaking of the Hidden God hidden even in the beginning of the universe  Science has not to surrender in face of the Universe and when Pascal tries to infer the existence of God from the supposed infinitude of Nature, we may think that he is looking in the wrong direction.

I do not think that G. H. Hardy was talking nonsense when he insisted that the mathematician was discovering rather than creating, nor was it wholly nonsense for Kepler to exult that he was thinking God's thoughts after him. The world for me is a necessary system, and in the degree to which the thinker can surrender his thought to that system and follow it, he is in a sense participating in that which is timeless or eternal.

I like the scientific spiritthe holding off, the being sure but not too sure, the willingness to surrender ideas when the evidence is against them: this is ultimately fineit always keeps the way beyond open.

If a man is in any sense a real mathematician, then it is a hundred to one that his mathematics will be far better than anything else he can do, and that it would be silly if he surrendered any decent opportunity of exercising his one talent in order to do undistinguished work in other fields. Such a sacrifice could be justified only by economic necessity of age. 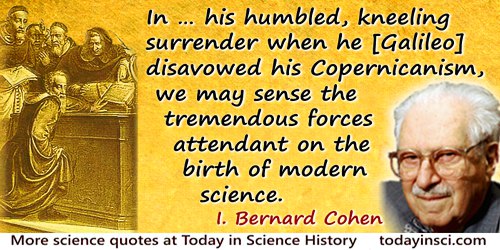 In  his humbled, kneeling surrender when he disavowed his Copernicanism, we may sense the tremendous forces attendant on the birth of modern science.

Investigators are commonly said to be engaged in a search for the truth. I think they themselves would usually state their aims less pretentiously. What the experimenter is really trying to do is to learn whether facts can be established which will be recognized as facts by others and which will support some theory that in imagination he has projected. But he must be ingenuously honest. He must face facts as they arise in the course of experimental procedure, whether they are favourable to his idea or not. In doing this he must be ready to surrender his theory at any time if the facts are adverse to it.

The Way of an Investigator: A Scientist's Experiences in Medical Research (1945), 34.

It is difficult to know how to treat the errors of the age. If a man oppose them, he stands alone; if he surrender to them, they bring him neither joy nor credit.

Logic is not concerned with human behavior in the same sense that physiology, psychology, and social sciences are concerned with it. These sciences formulate laws or universal statements which have as their subject matter human activities as processes in time. Logic, on the contrary, is concerned with relations between factual sentences (or thoughts). If logic ever discusses the truth of factual sentences it does so only conditionally, somewhat as follows: if such-and-such a sentence is true, then such-and-such another sentence is true. Logic itself does not decide whether the first sentence is true, but surrenders that question to one or the other of the empirical sciences.

Most people prefer to carry out the kinds of experiments that allow the scientist to feel that he is in full control of the situation rather than surrendering himself to the situation, as one must in studying human beings as they actually live.

Preferring a search for objective reality over revelation is another way of satisfying religious hunger. It is an endeavor almost as old as civilization and intertwined with traditional religion, but it follows a very different coursea stoics creed, an acquired taste, a guidebook to adventure plotted across rough terrain. It aims to save the spirit, not by surrender but by liberation of the human mind. Its central tenet, as Einstein knew, is the unification of knowledge. When we have unified enough certain knowledge, we will understand who we are and why we are here. If those committed to the quest fail, they will be forgiven. When lost, they will find another way.

Science seems to me to teach in the highest and strongest manner the great truth which is embodied in the Christian conception of entire surrender to the will of God. Sit down before fact as a little child, be prepared to give up every preconceived notion, follow humbly wherever and to whatever abysses nature leads, or you shall learn nothing. I have only begun to learn content and peace of mind since I have resolved at all risks to do this.

Surrender. Let silence have you. And if you find you are still swimming on the surface of the ocean, let go and sink into the depths of love.

The foolish read to escape reality; the wise surrender to it.

The great question.  is, shall we surrender to our surroundings, or shall we make our peace with nature and begin to make reparations for the damage we have done to our air, our land, our water? Restoring nature to its natural state is a cause beyond party and beyond factions. It has become a common cause of all the people of America.

The physicist cannot simply surrender to the philosopher the critical contemplation of the theoretical foundations for he himself knows best and feels most surely where the shoe pinches.  he must try to make clear in his own mind just how far the concepts which he uses are justified  The whole of science is nothing more than a refinement of everyday thinking. It is for this reason that the critical thinking of the physicist cannot possibly be restricted by the examination of the concepts of his own specific field. He cannot proceed without considering critically a much more difficult problem, the problem of analyzing the nature of everyday thinking.

The supreme goal of all theory is to make the irreducible basic elements as simple and as few as possible without having to surrender the adequate representation of a single datum of experience.

To surrender to ignorance and call it God has always been premature, and it remains premature today.

Giving a toast to the greatest of our contemporaries to a thousand guests at a public dinner, given in Einstein's honor by the Ortoze Society at the Savoy Hotel, London (28 Oct 1930). 'Shaw and Einstein Speeches', New York Times (29 Oct 1930), 12. The Ortoze Society worked for the welfare of Jews in Eastern Europe.