As far as I see, such a theory [of the primeval atom] remains entirely outside any metaphysical or religious question. It leaves the materialist free to deny any transcendental Being. He may keep, for the bottom of space-time, the same attitude of mind he has been able to adopt for events occurring in non-singular places in space-time. For the believer, it removes any attempt to familiarity with God, as were Laplaceâ€™s chiquenaude or Jeansâ€™ finger. It is consonant with the wording of Isaiah speaking of the â€śHidden Godâ€ť hidden even in the beginning of the universe â€¦ Science has not to surrender in face of the Universe and when Pascal tries to infer the existence of God from the supposed infinitude of Nature, we may think that he is looking in the wrong direction.

I am very fond of the oyster shell. It is humble and awkward and ugly. It is slate-colored and unsymmetrical. Its form is not primarily beautiful but functional. I make fun of its knobbiness. Sometimes I resent its burdens and excrescences. But its tireless adaptability and tenacity draw my astonished admiration and sometimes even my tears. And it is comfortable in its familiarity, its homeliness, like old garden gloves when have molded themselves perfectly to the shape of the hand.

I have been especially fortunate for about 50 years in having two memory banks available—whenever I can't remember something I ask my wife, and thus I am able to draw on this auxiliary memory bank. Moreover, there is a second way In which I get ideas ... I listen carefully to what my wife says, and in this way I often get a good idea. I recommend to ... young people ... that you make a permanent acquisition of an auxiliary memory bank that you can become familiar with and draw upon throughout your lives.

It is exceptional that one should be able to acquire the understanding of a process without having previously acquired a deep familiarity with running it, with using it, before one has assimilated it in an instinctive and empirical way. Thus any discussion of the nature of intellectual effort in any field is difficult, unless it presupposes an easy, routine familiarity with that field. In mathematics this limitation becomes very severe.

It is the symbolic language of mathematics only which has yet proved sufficiently accurate and comprehensive to demand familiarity with this conception of an inverse process.

My fatherâ€™s collection of fossils was practically unnamed, but the appearance of Phillipsâ€™ book [Geology of the Yorkshire Coast], in which most of our specimens were figured, enabled us to remedy this defect. Every evening was devoted by us to accomplishing the work. This was my first introduction to true scientific study. â€¦ Phillipsâ€™ accurate volume initiated an entirely new order of things. Many a time did I mourn over the publication of this book, and the consequences immediately resulting from it. Instead of indulging in the games and idleness to which most lads are prone, my evenings throughout a long winter were devoted to the detested labour of naming these miserable stones. Such is the short-sightedness of boyhood. Pursuing this uncongenial work gave me in my thirteenth year a thorough practical familiarity with the palaeontological treasures of Eastern Yorkshire. This early acquisition happily moulded the entire course of my future life.

Scientists and Drapers. Why should the botanist, geologist or other-ist give himself such airs over the draperâ€™s assistant? Is it because he names his plants or specimens with Latin names and divides them into genera and species, whereas the draper does not formulate his classifications, or at any rate only uses his mother tongue when he does? Yet how like the sub-divisions of textile life are to those of the animal and vegetable kingdoms! A few great familiesâ€”cotton, linen, hempen, woollen, silk, mohair, alpacaâ€”into what an infinite variety of genera and species do not these great families subdivide themselves? And does it take less labour, with less intelligence, to master all these and to acquire familiarity with their various habits, habitats and prices than it does to master the details of any other great branch of science? I do not know. But when I think of Shoolbredâ€™s on the one hand and, say, the ornithological collections of the British Museum upon the other, I feel as though it would take me less trouble to master the second than the first.

Some years ago John Kenneth Galbraith wrote in an essay on his efforts at writing a history of economics: â€śAs one approaches the present, one is filled with a sense of hopelessness; in a year and possibly even a month, there is now more economic comment in the supposedly serious literature than survives from the whole of the thousand years commonly denominated as the Middle Ages â€¦ anyone who claims to be familiar with it all is a confessing liar.â€ť I believe that all physicists would subscribe to the same sentiments regarding their own professional literature. I do at any rate.

In H. Henry Stroke, 'The Physical Review Then and Now', Physical Review: The First Hundred Years: a Selection of Seminal Papers and Commentaries, Vol. 1, 1.

The historian of science may be tempted to claim that when paradigms change, the world itself changes with them. Led by a new paradigm, scientists adopt new instruments and look in new places. even more important, during revolutions, scientists see new and different things when looking with familiar instruments in places they have looked before. It is rather as if the professional community had been suddenly transported to another planet where familiar objects are seen in a different light and are joined by unfamiliar ones as well.

In The Structure of Scientific Revolutions (1962, 2nd ed. 1970). Excerpt 'Revolutions as Changes of World View', in Joseph Margolis and Jacques Catudal, The Quarrel between Invariance and Flux (2001), 35-36.

The peculiar character of mathematical truth is, that it is necessarily and inevitably true; and one of the most important lessons which we learn from our mathematical studies is a knowledge that there are such truths, and a familiarity with their form and character.
This lesson is not only lost, but read backward, if the student is taught that there is no such difference, and that mathematical truths themselves are learned by experience.

In Thoughts on the Study of Mathematics. Principles of English University Education (1838). 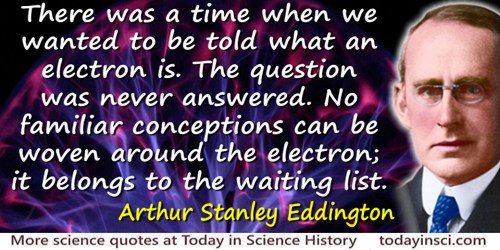 There was a time when we wanted to be told what an electron is. The question was never answered. No familiar conceptions can be woven around the electron; it belongs to the waiting list.

To appreciate a work of art we need bring with us nothing from life, no knowledge of its ideas and affairs, no familiarity with its emotions. Art transports us from the world of manâ€™s activity to a world of Ă¦sthetic exaltation. For a moment we are shut off from human interests; our anticipations and memories are arrested; we are lifted above the stream of life. The pure mathematician rapt in his studies knows a state of mind which I take to be similar, if not identical. He feels an emotion for his speculations which arises from no perceived relation between them and the lives of men, but springs, inhuman or super-human, from the heart of an abstract science. I wonder, sometimes, whether the appreciators of art and of mathematical solutions are not even more closely allied.

We should have positive expectations of what is in the universe, not fears and dreads. We are made with the realization that weâ€™re not Earthbound, and that our acceptance of the universe offers us room to explore and extend outward. Itâ€™s like being in a dark room and imagining all sorts of terrors. But when we turn on the light â€“ technology - suddenly itâ€™s just a room where we can stretch out and explore. If the resources here on Earth are limited, they are not limited in the universe. We are not constrained by the limitations of our planet. As children have to leave the security of family and home life to insure growth into mature adults, so also must humankind leave the security and familiarity of Earth to reach maturity and obtain the highest attainment possible for the human race.

When a learner, in the fullness of his powers, comes to great truths unstaled by premature familiarity, he rejoices in the lateness of his lessons.

When experimental results are found to be in conflict with those of an earlier investigator, the matter is often taken too easily and disposed of for an instance by pointing out a possible source of error in the experiments of the predessessor, but without enquiring whether the error, if present, would be quantitatively sufficient to explain the discrepancy. I think that disagreement with former results should never be taken easily, but every effort should be made to find a true explanation. This can be done in many more cases than it actually is; and as a result, it can be done more easily by the man â€śon the spotâ€ť who is already familiar with the essential details. But it may require a great deal of imagination, and very often it will require supplementary experiments.

From 'August Krogh' in Festkrift KĂ¸benhavns Universitet 1950 (1950), 18, as cited by E. Snorrason, 'Krogh, Schack August Steenberg', in Charles Coulton Gillispie (ed.), Dictionary of Scientific Biography (1973), Vol 7, 501. The DSB quote is introduced, â€śAll his life Krogh was more interested in physical than in chemiical problems in biology, and he explained his critical attitude thus.â€ť

[A] theory is a Fact; a Fact is a familiar Theory.