He thought he saw an Argument
That proved he was the Pope:
He looked again and found it was
A Bar of Mottled Soap.
A fact so dread. he faintly said,
Extinguishes all hope!

It took Galileo 16 years to master the universe. You have one night. It seems unfair. The genius had all that time. While you have a few short hours to learn sun spots from your satellites before the dreaded astronomy exam. On the other hand, Vivarin [caffeine tablets] help you keep awake and mentally alert So even when the subject matters dull, your mind will remain razor sharp. If Galileo had used Vivarin, maybe he could have mastered the solar system faster, too. 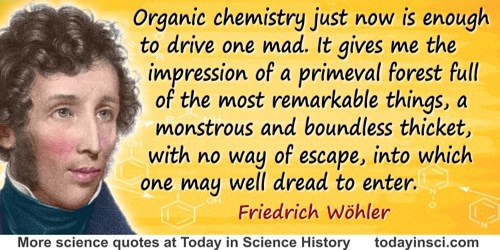 Organic chemistry just now is enough to drive one mad. It gives me the impression of a primeval forest full of the most remarkable things, a monstrous and boundless thicket, with no way of escape, into which one may well dread to enter.

Letter to J.J. Berzelius (28 Jan 1835). In Bulletin of the Atomic Scientists (Nov 1949), 310. Date of letter as given in Alan L. Mackay, A Dictionary of Scientific Quotations (1991), 267. An alternate translation is Organic chemistry nowadays almost drives one mad to me it appears like a primeval tropical forest full of the most remarkable things a dreadful endless jungle into which one dare not enter for there seems no way out. as given in J.R. Partington, A History of Chemistry (1901), Vol. 4, 327.

The eternal silence of these infinite spaces fills me with dread.

The rich man, gasping for breath  feels at last the impotence of gold; that death which he dreaded at a distance as an enemy, he now hails when he is near, as a friend; a friend that alone can bring the peace his treasures cannot purchase, and remove the pain his physicians cannot cure.

In Lacon: Or Many Things in Few Words, Addressed to Those who Think (1832), 125. [Part of this quote (after the semicolon) is often seen attributed to Mortimer Collins, who was born in 1827. That date makes it clearly impossible for Collins to be the author of this quote, published in 1832 by Colton.]

The three most effective incentives to human action may be  classified as creed, greed and dread.  In examining the scientist it is perhaps worth while to examine how far he is moved by these three incentives. I think that, rather peculiarly and rather exceptionally, he is very little moved by dread.  He is in fact essentially a person who has been taught he must be fearless in his dealing with facts.

There is no royal road to science, and only those who do not dread the fatiguing climb of its steep paths have a chance of gaining its luminous summits.

Preface to the French Edition, Das Capital (1872). In Karl Marx, Capital: The Process of Capitalist Production, translated from the 3rd German edition by S. Moore and E. Aveling (1967), 21.

We should have positive expectations of what is in the universe, not fears and dreads. We are made with the realization that were not Earthbound, and that our acceptance of the universe offers us room to explore and extend outward. Its like being in a dark room and imagining all sorts of terrors. But when we turn on the light  technology - suddenly its just a room where we can stretch out and explore. If the resources here on Earth are limited, they are not limited in the universe. We are not constrained by the limitations of our planet. As children have to leave the security of family and home life to insure growth into mature adults, so also must humankind leave the security and familiarity of Earth to reach maturity and obtain the highest attainment possible for the human race.

When the state is shaken to its foundations by internal or external events, when commerce, industry and all trades shall be at a stand, and perhaps on the brink of ruin; when the property and fortune of all are shaken or changed, and the inhabitants of towns look forward with dread and apprehension to the future, then the agriculturalist holds in his hand the key to the money chest of the rich, and the savings-box of the poor; for political events have not the slightest influence on the natural law, which forces man to take into his system, daily, a certain number of ounces of carbon and nitrogen.
Reflecting on events of 1848.

When you say, The burned child dreads the fire,  you mean that he is already a master of induction.

Epigraph in Isaac Asimovs Book of Science and Nature Quotations (1988), 132.