A mathematical problem should be difficult in order to entice us, yet not completely inaccessible, lest it mock at our efforts. It should be to us a guide post on the mazy paths to hidden truths, and ultimately a reminder of our pleasure in the successful solution. 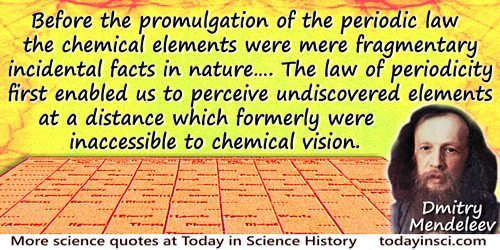 God help the teacher, if a man of sensibility and genius, when a booby father presents him with his booby son, and insists on lighting up the rays of science in a fellow's head whose skull is impervious and inaccessible by any other way than a positive fracture with a cudgel.

In its earliest development knowledge is self-sown. Impressions force themselves upon mens senses whether they will or not, and often against their will. The amount of interest in which these impressions awaken is determined by the coarser pains and pleasures which they carry in their train or by mere curiosity; and reason deals with the materials supplied to it as far as that interest carries it, and no further. Such common knowledge is rather brought than sought; and such ratiocination is little more than the working of a blind intellectual instinct. It is only when the mind passes beyond this condition that it begins to evolve science. When simple curiosity passes into the love of knowledge as such, and the gratification of the æsthetic sense of the beauty of completeness and accuracy seems more desirable that the easy indolence of ignorance; when the finding out of the causes of things becomes a source of joy, and he is accounted happy who is successful in the search, common knowledge passes into what our forefathers called natural history, whence there is but a step to that which used to be termed natural philosophy, and now passes by the name of physical science.
In this final state of knowledge the phenomena of nature are regarded as one continuous series of causes and effects; and the ultimate object of science is to trace out that series, from the term which is nearest to us, to that which is at the farthest limit accessible to our means of investigation.
The course of nature as it is, as it has been, and as it will be, is the object of scientific inquiry; whatever lies beyond, above, or below this is outside science. But the philosopher need not despair at the limitation on his field of labor; in relation to the human mind Nature is boundless; and, though nowhere inaccessible, she is everywhere unfathomable.

In natural history, great discovery often requires a map to a hidden mine filled with gems then easily gathered by conventional tools, not a shiny new space-age machine for penetrating previously inaccessible worlds.

Its [mathematical analysis] chief attribute is clearness; it has no means for expressing confused ideas. It compares the most diverse phenomena and discovers the secret analogies which unite them. If matter escapes us, as that of air and light because of its extreme tenuity, if bodies are placed far from us in the immensity of space, if man wishes to know the aspect of the heavens at successive periods separated by many centuries, if gravity and heat act in the interior of the solid earth at depths which will forever be inaccessible, mathematical analysis is still able to trace the laws of these phenomena. It renders them present and measurable, and appears to be the faculty of the human mind destined to supplement the brevity of life and the imperfection of the senses, and what is even more remarkable, it follows the same course in the study of all phenomena; it explains them in the same language, as if in witness to the unity and simplicity of the plan of the universe, and to make more manifest the unchangeable order which presides over all natural causes.

Mathematics has often been characterized as the most conservative of all sciences. This is true in the sense of the immediate dependence of new upon old results. All the marvellous new advancements presuppose the old as indispensable steps in the ladder.  Inaccessibility of special fields of mathematics, except by the regular way of logically antecedent acquirements, renders the study discouraging or hateful to weak or indolent minds.

Nature!  She is always building up and destroying; but her workshop is inaccessible. 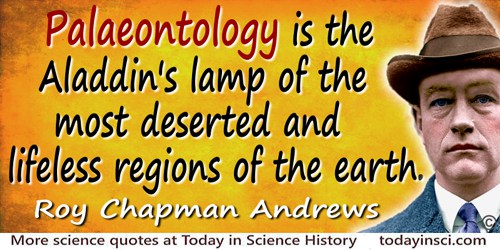 Palaeontology is the Aladdins lamp of the most deserted and lifeless regions of the earth; it touches the rocks and there spring forth in orderly succession the monarchs of the past and the ancient river streams and savannahs wherein they flourished. The rocks usually hide their story in the most difficult and inaccessible places. 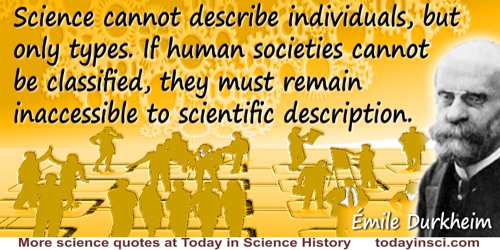 Science cannot describe individuals, but only types. If human societies cannot be classified, they must remain inaccessible to scientific description.

'Montesquieu's Contribution to the Rise of Social Science' (1892), in Montesquieu and Rousseau. Forerunners of Sociology, trans. Ralph Manheim (1960), 9.

Since the Creator had made the facts of the after-life inaccessible to man, He must not have required that man understand death in order to live fruitfully.

The psyche is distinctly more complicated and inaccessible than the body. It is, so to speak, the half of the world which comes into existence only when we become conscious of it. For that reason the psyche is not only a personal but a world problem, and the psychiatrist has to deal with an entire world.

From Erinnerungen, Träume, Gedanken, as translated in Memories, Dreams, Reflections (1963), 132.

The ruins of Machu Picchu are perched on top of a steep ridge in the most inaccessible corner of the most inaccessible section of the central Andes. No part of the highlands of Peru has been better defended by natural bulwarksa stupendous canyon whose rim is more than a mile above the river, whose rock is granite, and whose precipices are frequently a thousand feet sheer.

There are no shortcuts to moral insight. Nature is not intrinsically anything that can offer comfort or solace in human termsif only because our species is such an insignificant latecomer in a world not constructed for us. So much the better. The answers to moral dilemmas are not lying out there, waiting to be discovered. They reside, like the kingdom of God, within usthe most difficult and inaccessible spot for any discovery or consensus.