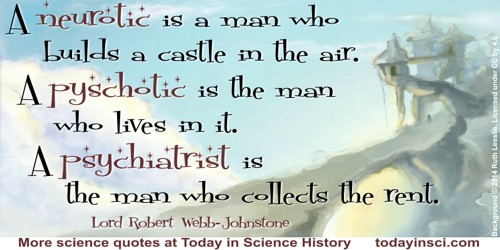 A psychiatrist is a man who goes to the Folies-Bergère and looks at the audience. 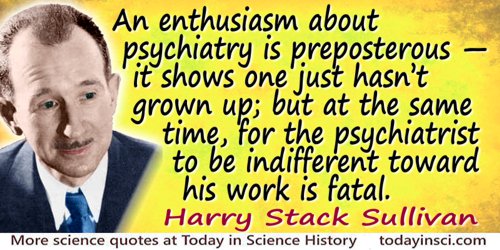 An enthusiasm about psychiatry is preposterousit shows one just hasnt grown up; but at the same time, for the psychiatrist to be indifferent toward his work is fatal.

I know each conversation with a psychiatrist in the morning made me want to hang myself because I knew I could not strangle him.

If I were to suggest that between the Earth and Mars there is a china teapot revolving about the sun in an elliptical orbit, nobody would be able to disprove my assertion provided I were careful to add that the teapot is too small to be revealed even by our most powerful telescopes. But if I were to go on to say that, since my assertion cannot be disproved, it is intolerable presumption on the part of human reason to doubt it, I should rightly be thought to be talking nonsense. If, however, the existence of such a teapot were affirmed in ancient books, taught as the sacred truth every Sunday, and instilled into the minds of children at school, hesitation to believe in its existence would become a mark of eccentricity and entitle the doubter to the attentions of the psychiatrist in an enlightened age or of the Inquisitor in an earlier time.

In the training and in the exercise of medicine a remoteness abides between the field of neurology and that of mental health, psychiatry. It is sometimes blamed to prejudice on the part of the one side or the other. It is both more grave and less grave than that. It has a reasonable basis. It is rooted in the energy-mind problem. Physiology has not enough to offer about the brain in relation to the mind to lend the psychiatrist much help.

Philosophers and psychiatrists should explain why it is that we mathematicians are in the habit of systematically erasing our footsteps. Scientists have always looked askance at this strange habit of mathematicians, which has changed little from Pythagoras to our day.

From the second Fubini Lecture, delivered at the Villa Gualino, Torino (2 Jun 1998), 'What is Invariant Theory, Really?' Collected in Henry H. Crapo and D. Senato (eds.), Algebraic Combinatorics and Computer Science: A Tribute to Gian-Carlo Rota (2001), 55.

Psychiatrist David Shainberg argued that mental illness, which appears chaotic, is actually the reverse. Mental illness occurs when images of the self become rigid and closed, restricting an open creative response to the world.[Co-author with David Peat]

In John F. Briggs and David Peat, Seven Life Lessons of Chaos: Spiritual Wisdom from the Science of Change (1999, 2000), 29. A footnote gives the source of this idea as from David Shainberg, The Transforming Self: New Dimensions in Psychoanalytic Process (1973).

Psychiatrist: A man who asks you a lot of expensive questions your wife asks you for nothing.

The invention of IQ did a great disservice to creativity in education. ... Individuality, personality, originality, are too precious to be meddled with by amateur psychiatrists whose patterns for a wholesome personality are inevitably their own.

The psyche is distinctly more complicated and inaccessible than the body. It is, so to speak, the half of the world which comes into existence only when we become conscious of it. For that reason the psyche is not only a personal but a world problem, and the psychiatrist has to deal with an entire world.

From Erinnerungen, Träume, Gedanken, as translated in Memories, Dreams, Reflections (1963), 132.

The psychiatrist is the obstetrician of the mind.

~~[need primary source]~~ One of the most frightening things in the Western world and in this country in particular is the number of people who believe in things that are scientifically false. If someone tells me that the earth is less than 10000 years old in my opinion he should see a psychiatrist.

As quoted, without citation, in Joan Konner, The Atheists Bible: An Illustrious Collection of Irreverent Thought (2007), 46. Webmaster is dubious about authenticity, and as yet, has been unable to find a reliable primary source - can you help?