But the life of a man is of no greater importance to the universe than that of an oyster.

Great Empedocles, that ardent soul,
Leapt into Etna and was roasted whole.

As quoted, from an unknown poet, in Bertrand Russell, A History of Western Philosophy (1946), 60.

I decided that life rationally considered seemed pointless and futile, but it is still interesting in a variety of ways, including the study of science. So why not carry on, following the path of scientific hedonism? Besides, I did not have the courage for the more rational procedure of suicide.

I know each conversation with a psychiatrist in the morning made me want to hang myself because I knew I could not strangle him.

I was depressed at that time. I was in analysis. I was suicidal as a matter of fact and would have killed myself, but I was in analysis with a strict Freudian, and, if you kill yourself, they make you pay for the sessions you miss.

If finally, the science should prove that society at a certain time revert to the church and recover its old foundation of absolute faith in a personal providence and a revealed religion, it commits suicide.

If this is what the McCarran Act means in practice, it seems to us a form of organized cultural suicide.
In a letter co-signed with his Princeton University physics professor colleagues, Walker Bleakney and Milton G. White, protesting that Nobel Prize-winning, Cambridge professor, Dirac having been invited for a year's visit to Princeton, had been denied a visa by the U.S. State Department under section 212A of the Immigration and Naturalization Act (McCarran Act). Quoting a report in Physics Today, this regulation includes 'categories of undesireables ranging from vagrants to stowaways.' The real reason remains unclear, but was perhaps related to Dirac's prior science-related visits to Russia. Robert Oppenheimer's security clearance had recently been revoked, and this was the era of McCarthy's rabid anti-Communism hearings.

In our preoccupations with sex, our submission to gods and leaders, our sometimes suicidal commitment to ideas, religions, and trivial details of cultural style, we become the unconscious creators of the social organisms exploits.

In 'The Clint Eastwood Conundrum', The Lucifer Principle: A Scientific Expedition Into the Forces of History (1997), 8. 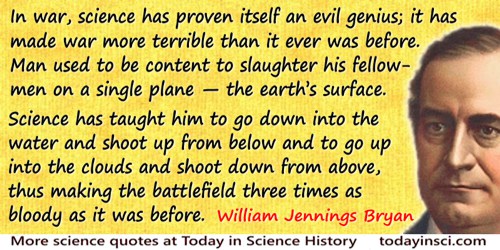 In war, science has proven itself an evil genius; it has made war more terrible than it ever was before. Man used to be content to slaughter his fellowmen on a single planethe earths surface. Science has taught him to go down into the water and shoot up from below and to go up into the clouds and shoot down from above, thus making the battlefield three times as bloody as it was before; but science does not teach brotherly love. Science has made war so hellish that civilization was about to commit suicide; and now we are told that newly discovered instruments of destruction will make the cruelties of the late war seem trivial in comparison with the cruelties of wars that may come in the future.

Proposed summation written for the Scopes Monkey Trial (1925), in Genevieve Forbes Herrick and John Origen Herrick, The Life of William Jennings Bryan (1925), 405. This speech was prepared for delivery at the trial, but was never heard there, as both sides mutually agreed to forego arguments to the jury.

Man has mounted science, and is now run away with. I firmly believe that before many centuries more, science will be the master of men. The engines he will have invented will be beyond his strength to control. Someday science may have the existence of mankind in its power, and the human race commit suicide, by blowing up the world. Not only shall we be able to cruise in space, but Ill be hanged if I see any reason why some future generation shouldnt walk off like a beetle with the world on its back, or give it another rotary motion so that every zone should receive in turn its due portion of heat and light.

Many people think that conservation is just about saving fluffy animalswhat they dont realise is that were trying to prevent the human race from committing suicide  We have declared war on the biological world, the world that supports us  At the moment the human race is in the position of a man sawing off the tree branch he is sitting on.

As quoted in Douglass Botting, Gerald Durrell: The Authorized Biography (1999), 194.

Science commits suicide when it adopts a creed.

Speech at the Museum, South Kensington, on unveiling of a statue of Charles Darwin. Quoted in Herbert Spencer, 'The Factors of Organic Evolution', The Nineteenth Century (April/May 1886), 19, 770.

Some day science may have the existence of man in its power, and the human race may commit suicide by blowing up the world.

Suicide is merely the product of the general condition of society, and that the individual felon only carries into effect what is a necessary consequence of preceding circumstances. In a given state of society, a certain number of persons must put an end to their own life. This is the general law; and the special question as to who shall commit the crime depends of course upon special laws; which, however, in their total action, must obey the large social law to which they are all subordinate. And the power of the larger law is so irresistible, that neither the love of life nor the fear of another world can avail any thing towards even checking its operation.

The Religion that is afraid of science dishonours God and commits suicide. It acknowledges that it is not equal to the whole of truth, that it legislates, tyrannizes over a village of God's empires but is not the immutable universal law. Every influx of atheism, of skepticism is thus made useful as a mercury pill assaulting and removing a diseased religion and making way for truth.

To my friends: my work is done. Why wait. GE

(1932) Suicide note. Because of intense pain caused by a disorder affecting his spine, he ended his life with a single gunshot to the heart.

Visualize yourself confronted with the task of killing, one after the other, a cabbage, a fly, a fish, a lizard, a guinea pig, a cat, a dog, a monkey and a baby chimpanzee. In the unlikely case that you should experience no greater inhibitions in killing the chimpanzee than in destroying the cabbage or the fly, my advice to you is to commit suicide at your earliest possible convenience, because you are a weird monstrosity and a public danger.

'The Enmity Between Generations and Its Probable Ethological Causes'. In Richard I. Evans, Konrad Lorenz: The Man and his Ideas (1975), 227.

What difference is there between a smoker and a suicide, except that the one takes longer to kill himself than the other.

Dic Tnickene Trunkenheit (Drunk without Drinking) (1658). Quoted in Count Egon Corti, A History of Smoking, translated from the German by Paul England (1931), 119.

While it is true that the suicide braves death, he does it not for some noble object but to escape some ill.