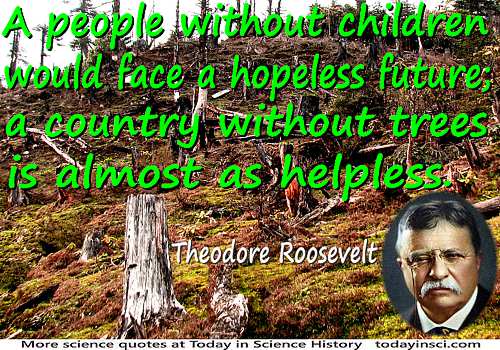 A people without children would face a hopeless future; a country without trees is almost as helpless.

It is almost as difficult to make a man unlearn his errors, as his knowledge. Mal-information is more hopeless than non-information: for error is always more busy than ignorance. Ignorance is a blank sheet on which we may write; but error is a scribbled one on which we first erase. Ignorance is contented to stand still with her back to the truth; but error is more presumptuous, and proceeds, in the same direction. Ignorance has no light, but error follows a false one. The consequence is, that error, when she retraces her footsteps, has farther to go, before we can arrive at the truth, than ignorance.

It is by no means hopeless to expect to make a machine for really very difficult mathematical problems. But you would have to proceed step-by-step. I think electricity would be the best thing to rely on.

Never leave an unsolved difficulty behind. I mean, dont go any further in that book till the difficulty is conquered. In this point, Mathematics differs entirely from most other subjects. Suppose you are reading an Italian book, and come to a hopelessly obscure sentencedont waste too much time on it, skip it, and go on; you will do very well without it. But if you skip a mathematical difficulty, it is sure to crop up again: you will find some other proof depending on it, and you will only get deeper and deeper into the mud.

From letter to Edith Rix with hints for studying (about Mar 1885), in Stuart Dodgson Collingwood, The Life and Letters of Lewis Carroll (1898), 241.

One of the strongest motives that lead men to art and science is escape from everyday life with its painful crudity and hopeless dreariness, from the fetters of one's own ever-shifting desires. A finely tempered nature longs to escape from the personal life into the world of objective perception and thought.

Perhaps I am just a hopeless rationalist, but isnt fascination as comforting as solace? Isnt nature immeasurably more interesting for its complexities and its lack of conformity to our hopes? Isnt curiosity as wondrously and fundamentally human as compassion?

The belief in the immortality of the human soul is a dogma which is in hopeless contradiction with the most solid empirical truths of modern science.

The most hopelessly stupid man is he who is not aware that he is wise.

The whole strenuous intellectual work of an industrious research worker would appear, after all, in vain and hopeless, if he were not occasionally through some striking facts to find that he had, at the end of all his criss-cross journeys, at last accomplished at least one step which was conclusively nearer the truth.

The world in which we live is a hopeless case. I myself prefer to abide in abstractions that have nothing to do with reality.

When I was reading Mathematics for University honours, I would sometimes, after working a week or two at some new book, and mastering ten or twenty pages, get into a hopeless muddle, and find it just as bad the next morning. My rule was to begin the book again. And perhaps in another fortnight I had come to the old difficulty with impetus enough to get over it. Or perhaps not. I have several books that I have begun over and over again.