A hero is an ordinary individual who finds the strength to persevere and endure in spite of overwhelming obstacles.

Alcohol is the anesthesia by which we endure the operation of life.

Widely seen misattributed (?) to George Bernard Shaw, but always without source citation. There seems to be no primary source for Shaw having written the idea using the above wording. However, there are other, documented, quotes about alcohol on the George Bernard Shaw Quotations page, which express a similar theme.

And from true lordship it follows that the true God is living, intelligent, and powerful; from the other perfections, that he is supreme, or supremely perfect. He is eternal and infinite, omnipotent and omniscient; that is, he endures from eternity to eternity; and he is present from infinity to infinity; he rules all things, and he knows all things that happen or can happen.

Anything made out of destructible matter
Infinite time would have devoured before.
But if the atoms that make and replenish the world
Have endured through the immense span of the past
Their natures are immortalthat is clear.
Never can things revert to nothingness!

But as my conclusions have lately been much misrepresented, and it has been stated that I attribute the modification of species exclusively to natural selection, I may be permitted to remark that in the first edition of this work, and subsequently, I placed in a most conspicuous positionnamely, at the close of the Introductionthe following words: I am convinced that natural selection has been the main but not the exclusive means of modification. This has been of no avail. Great is the power of steady misrepresentation; but the history of science shows that fortunately this power does not long endure.

In The Origin of Species by Means of Natural Selection with additions and corrections from sixth and last English edition (1899), Vol. 2, 293.

Gods are born and die, but the atom endures. 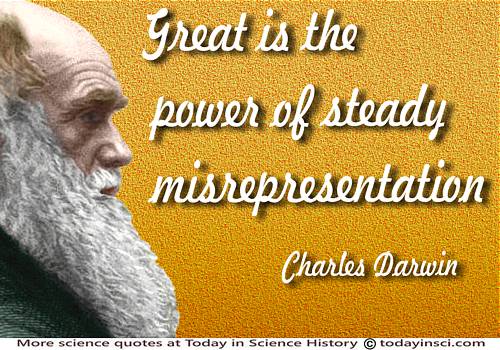 Great is the power of steady misrepresentation - but the history of science shows how, fortunately, this power does not endure long.

Humanity, in the course of time, had to endure from the hands of science two great outrages against its naive self-love. The first was when humanity discovered that our earth was not the center of the universe. The second occurred when biological research robbed man of his apparent superiority under special creation, and rebuked him with his descent from the animal kingdom, and his ineradicable animal nature.

From a series of 28 lectures for laymen, Part Three, 'General Theory of the Neurons', Lecture 18, 'Traumatic Fixationthe Unconscious' collected in Sigmund Freud and G. Stanley Hall (trans.), A General Introduction to Psychoanalysis (1920), 246-247.

I wont let anyone take us backward, deny our economy the benefits of harnessing a clean energy future, or force our children to endure the catastrophe that would result from unchecked climate change.

It is easy to overlook this thought that life just is. As humans we are inclined to feel that life must have a point. We have plans and aspirations and desires. We want to take constant advantage of the intoxicating existence weve been endowed with. But whats life to a lichen? Yet its impulse to exist, to be, is every bit as strong as ours-arguably even stronger. If I were told that I had to spend decades being a furry growth on a rock in the woods, I believe I would lose the will to go on. Lichens dont. Like virtually all living things, they will suffer any hardship; endure any insult, for a moments additions existence. Life, in short just wants to be.

Life is a series of experiences, each one of which makes us bigger, even though it is hard to realize this. For the world was built to develop character, and we must learn that the setbacks and griefs which we endure help us in our marching onward.

None of Darwins particular doctrines will necessarily endure the test of time and trial. Into the melting-pot must they go as often as any man of science deems it fitting. But Darwinism as the touch of nature that makes the whole world kin can hardly pass away.

Only by strict specialization can the scientific worker become fully conscious, for once and perhaps never again in his lifetime, that he has achieved something that will endure. A really definitive and good accomplishment is today always a specialized accomplishment.

Suppose that we are wise enough to learn and know—and yet not wise enough to control our learning and knowledge, so that we use it to destroy ourselves? Even if that is so, knowledge remains better than ignorance. It is better to know—even if the knowledge endures only for the moment that comes before destruction—than to gain eternal life at the price of a dull and swinish lack of comprehension of a universe that swirls unseen before us in all its wonder. That was the choice of Achilles, and it is mine, too.

Widely seen on the Web, but always without citation, so regard attribution as uncertain. Webmaster has not yet found reliable verification. Contact Webmaster if you know a primary print source.

The priest persuades a humble people to endure their hard lot, a politician urges them to rebel against it, and a scientist thinks of a method that does away with the hard lot altogether.

The stream of thought flows on but most of its segments fall into the bottomless abyss of oblivion. Of some, no memory survives the instant of their passage. Of others, it is confined to a few moments, hours or days. Others, again, leave vestiges which are indestructible, and by means of which they may be recalled as long as life endures.

Theories rarely arise as patient inferences forced by accumulated facts. Theories are mental constructs potentiated by complex external prods (including, in idealized cases, a commanding push from empirical reality) . But the prods often in clude dreams, quirks, and errorsjust as we may obtain crucial bursts of energy from foodstuffs or pharmaceuticals of no objective or enduring value. Great truth can emerge from small error. Evolution is thrilling, liberating, and correct. And Macrauchenia is a litoptern.

Those who dwell as scientists  among the beauties and mysteries of the earth are never alone or weary of life. Those who contemplate the beauty of the earth find reserves of strength that will endure as long as life lasts.