...That day in the account of creation, or those days that are numbers according to its recurrence, are beyond the experience and knowledge of us mortal earthbound men. And if we are able to make any effort towards an understanding of those days, we ought not to rush forward with an ill considered opinion, as if no other reasonable and plausible interpretation could be offered.

Bernard: Oh, youre going to zap me with penicillin and pesticides. Spare me that and Ill spare you the bomb and aerosols. But dont confuse progress with perfectibility. A great poet is always timely. A great philosopher is an urgent need. Theres no rush for Isaac Newton. We were quite happy with Aristotles cosmos. Personally, I preferred it. Fifty-five crystal spheres geared to Gods crankshaft is my idea of a satisfying universe. I cant think of anything more trivial than the speed of light. Quarks, quasarsbig bangs, black holeswho [cares]? How did you people con us out of all that status? All that money? And why are you so pleased with yourselves?
Chloe: Are you against penicillin, Bernard?
Bernard: Dont feed the animals.

Education, like everything else, goes in fads, and has the normal human tendency to put up with something bad for just so long, and then rush to the other extreme.

Euler could repeat the Aeneid from the beginning to the end, and he could even tell the first and last lines in every page of the edition which he used. In one of his works there is a learned memoir on a question in mechanics, of which, as he himself informs us, a verse of Aeneid gave him the first idea. [The anchor drops, the rushing keel is staid.]

If you have to prove a theorem, do not rush. First of all, understand fully what the theorem says, try to see clearly what it means. Then check the theorem; it could be false. Examine the consequences, verify as many particular instances as are needed to convince yourself of the truth. When you have satisfied yourself that the theorem is true, you can start proving it.

In scientific investigations it is grievously wrong to pander to the publics impatience for results, or to let them think that for discovery it is necessary only to set up a great manufactory and a system of mass production. If in treatment team work is effective, in research it is the individual who counts first and above all. No great thought has ever sprung from anything but a single mind, suddenly conceiving. Throughout the whole world there has been too violent a forcing of the growth of ideas; too feverish a rush to perform experiments and publish conclusions. A year of vacation for calm detachment with all the individual workers thinking it all over in a desert should be proclaimed.

In Viewless Winds: Being the Recollections and Digressions of an Australian Surgeon (1939), 286.

Last night I invented a new pleasure, and as I was giving it the first trial an angel and a devil came rushing toward my house. They met at my door and fought with each other over my newly created pleasure; the one crying, It is a sin! - the other, It is a virtue!

Science and technology revolutionize our lives, but memory, tradition and myth frame our response. Expelled from individual consciousness by the rush of change, history finds its revenge by stamping the collective unconsciousness with habits, values, expectations, dreams. The dialectic between past and future will continue to form our lives.

The fool rushed to certain conclusions.
The middling man approached them warily, and with circumspection.
And the wise man, perceiving them from afar, decided to go round another way. 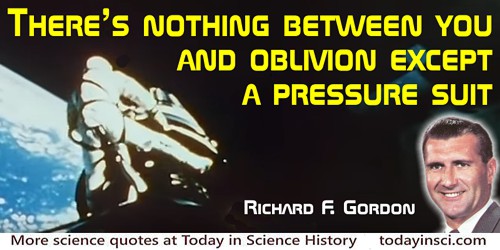 Theres nothing between you and oblivion except a pressure suit, and you just cant afford to get out there and get in a big rush and tangle yourself up where nobody can help you.  The biggest thing Ive learned from the people that have gone in the past, you simply have to take your time, and you cant exhaust yourself.

Think impossible and dreams get discarded, projects get abandoned, and hope for wellness is torpedoed. But let someone yell the words its possible, and resources we hadnt been aware of come rushing in to assist us in our quest.

We have reached the end of our journey into the depths of matter. We have sought for firm ground and found none. The deeper we penetrate, the more restless becomes the universe: all is rushing about and vibrating in a wild dance.

[William Gull] endeavoured, above all things, to study the natural history of disease, uncomplicated by the action of unnecessary drugs, and he resented all useless interference with the course of nature. He would say of meddlesome poly-pharmacyFools rush in, where angels fear to tread.