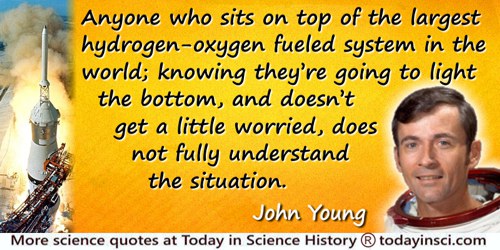 Anyone who sits on top of the largest hydrogen-oxygen fueled system in the world; knowing theyre going to light the bottom, and doesnt get a little worried, does not fully understand the situation.

Response to question whether he was worried about embarking on the first space shuttle flight. As quoted on the nmspacemuseum.org website of the New Mexico Museum of Space History.

Dirichlet was not satisfied to study Gauss Disquisitiones arithmetical once or several times, but continued throughout life to keep in close touch with the wealth of deep mathematical thoughts which it contains by perusing it again and again. For this reason the book was never placed on the shelf but had an abiding place on the table at which he worked.  Dirichlet was the first one, who not only fully understood this work, but made it also accessible to others.

For the most part we humans live with the false impression of security and a feeling of being at home in a seemingly trustworthy physical and human environment. But when the expected course of everyday life is interrupted, we are like shipwrecked people on a miserable plank in the open sea, having forgotten where they came from and not knowing whither they are drifting. But once we fully accept this, life becomes easier and there is no longer any disappointment.

I fully support the goal of species protection and conservation and believe that recovery and ultimately delisting of species should be the U.S. Fish and Wildlife Services top priority under ESA.

In order to comprehend and fully control arithmetical concepts and methods of proof, a high degree of abstraction is necessary, and this condition has at times been charged against arithmetic as a fault. I am of the opinion that all other fields of knowledge require at least an equally high degree of abstraction as mathematics,provided, that in these fields the foundations are also everywhere examined with the rigour and completeness which is actually necessary.

It has always seemed to me extreme presumptuousness on the part of those who want to make human ability the measure of what nature can and knows how to do, since, when one comes down to it, there is not one effect in nature, no matter how small, that even the most speculative minds can fully understand.

One of the most curious and interesting reptiles which I met with in Borneo was a large tree-frog, which was brought me by one of the Chinese workmen. He assured me that he had seen it come down in a slanting direction from a high tree, as if it flew. On examining it, I found the toes very long and fully webbed to their very extremity, so that when expanded they offered a surface much larger than the body. The forelegs were also bordered by a membrane, and the body was capable of considerable inflation. The back and limbs were of a very deep shining green colour, the undersurface and the inner toes yellow, while the webs were black, rayed with yellow. The body was about four inches long, while the webs of each hind foot, when fully expanded, covered a surface of four square inches, and the webs of all the feet together about twelve square inches. As the extremities of the toes have dilated discs for adhesion, showing the creature to be a true tree frog, it is difficult to imagine that this immense membrane of the toes can be for the purpose of swimming only, and the account of the Chinaman, that it flew down from the tree, becomes more credible. This is, I believe, the first instance known of a flying frog, and it is very interesting to Darwinians as showing that the variability of the toes which have been already modified for purposes of swimming and adhesive climbing, have been taken advantage of to enable an allied species to pass through the air like the flying lizard. It would appear to be a new species of the genus Rhacophorus, which consists of several frogs of a much smaller size than this, and having the webs of the toes less developed.

Suddenly, from behind the rim of the moon, in long, slow-motion moments of immense majesty, there emerges a sparkling blue and white jewel, a light, delicate sky-blue sphere laced with slowly swirling veils of white, rising gradually like a small pearl in a thick sea of black mystery. It takes more than a moment to fully realize this is Earth . . . home.

The competent programmer is fully aware of the limited size of his own skull. He therefore approaches his task with full humility, and avoids clever tricks like the plague.

The history of most fossil species includes two features particularly inconsistent with gradualism: 1. Stasis. Most species exhibit no directional change during their tenure on earth. They appear in the fossil record looking much the same as when they disappear; morphological change is usually limited and directionless. 2. Sudden appearance. In any local area, a species does not arise gradually by the steady transformation of its ancestors; it appears all at once and fully formed.

The mathematical method is the essence of mathematics. He who fully comprehends the method is a mathematician.

The Moon is a white strange world, great, white, soft-seeming globe in the night sky, and what she actually communicates to me across space I shall never fully know. But the Moon that pulls the tides, and the Moon that controls the menstrual periods of women, and the Moon that touches the lunatics, she is not the mere dead lump of the astronomist.... When we describe the Moon as dead, we are describing the deadness in ourselves. When we find space so hideously void, we are describing our own unbearable emptiness.

There is a clarity, a brilliance to space that simply doesnt exist on earth, even on a cloudless summers day in the Rockies, and nowhere else can you realize so fully the majesty of our Earth and be so awed at the thought that its only one of untold thousands of planets.

To fully understand the mathematical genius of Sophus Lie, one must not turn to books recently published by him in collaboration with Dr. Engel, but to his earlier memoirs, written during the first years of his scientific career. There Lie shows himself the true geometer that he is, while in his later publications, finding that he was but imperfectly understood by the mathematicians accustomed to the analytic point of view, he adopted a very general analytic form of treatment that is not always easy to follow.

We go into space because whatever mankind must undertake, free men must fully share.

Will we ever again be able to view a public object with civic dignity, unencumbered by commercial messages? Must city buses be fully painted as movable ads, lampposts smothered, taxis festooned, even seats in concert halls sold one by one to donors and embellished in perpetuity with their names on silver plaques?

Workers must root out the idea that by keeping the results of their labors to themselves a fortune will be assured to them. Patent fees are so much wasted money. The flying machine of the future will not be born fully fledged and capable of a flight for 1,000 miles or so. Like everything else it must be evolved gradually. The first difficulty is to get a thing that will fly at all. When this is made, a full description should be published as an aid to others. Excellence of design and workmanship will always defy competition.