Among the older records, we find chapter after chapter of which we can read the characters, and make out their meaning: and as we approach the period of mans creation, our book becomes more clear, and nature seems to speak to us in language so like our own, that we easily comprehend it. But just as we begin to enter on the history of physical changes going on before our eyes, and in which we ourselves bear a part, our chronicle seems to fail usa leaf has been torn out from nature's record, and the succession of events is almost hidden from our eyes.

Letter 1 to William Wordsworth. Quoted in the appendix to W. Wordsworth, A Complete Guide to the Lakes, Comprising Minute Direction for the Tourist, with Mr Wordsworth's Description of the Scenery of the County and Three Letters upon the Geology of the Lake District (1842), 14.

Atoms are not indivisible, for negatively electrified particles can be torn from them by the action of electrical forces.

Every one should keep a mental waste-paper basket and the older he grows the more things he will consign to ittorn up to irrecoverable tatters.

However far the mathematicians calculating senses seem to be separated from the audacious flight of the artists imagination, these manifestations refer to mere instantaneous images, which have been arbitrarily torn from the operation of both. In designing new theories, the mathematician needs an equally bold and inspired imagination as creative as the artist, and in carrying out the details of a work the artist must unemotionally reckon all the resources necessary for the success of the parts. Common to both is the fabrication, the creation of the structure from the intellect.

Science! true daughter of Old Time thou art!
alterest all things with thy peering eyes.
preyest thou thus upon the poets heart,
Vulture, whose wings are dull realities?
How should he love thee? or how deem thee wise,
Who wouldst not leave him in his wandering .
To seek for treasure in the jewelled skies,
Albeit he soared with an undaunted wing?
Hast thou not dragged Diana from her car?
And driven the Hamadryad from the wood
To seek a shelter in some happier star?
Hast thou not torn the Naiad from her flood,
The Elfin from the green grass, and from me
The summer dread beneath the tamarind tree?

The advance of science is not comparable to the changes of a city, where old edifices are pitilessly torn down to give place to new, but to the continuous evolution of zoologic types which develop ceaselessly and end by becoming unrecognisable to the common sight, but where an expert eye finds always traces of the prior work of the centuries past. One must not think then that the old-fashioned theories have been sterile and vain.

The body of Benjamin Franklin, Printer (like the cover of an old book, its contents torn out and stripped of its lettering and gilding), lies here, food for worms; but the work shall not be lost, for it will (as he believed) appear once more in a new and more elegant edition, revised and corrected by the Author.

Epitaph on his tombstone 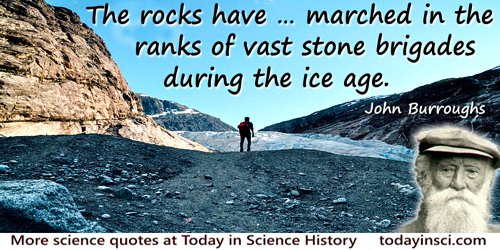 The rocks have a history; gray and weatherworn, they are veterans of many battles; they have most of them marched in the ranks of vast stone brigades during the ice age; they have been torn from the hills, recruited from the mountaintops, and marshaled on the plains and in the valleys; and now the elemental war is over, there they lie waging a gentle but incessant warfare with time and slowly, oh, so slowly, yielding to its attacks!

The sciences have sworn among themselves an inviolable partnership; it is almost impossible to separate them, for they would rather suffer than be torn apart; and if anyone persists in doing so, he gets for his trouble only imperfect and confused fragments. Yet they do not arrive all together, but they hold each other by the hand so that they follow one another in a natural order which it is dangerous to change, because they refuse to enter in any other way where they are called. ...

Thy shadow, Earth, from Pole to Central Sea,
Now steals along upon the Moon's meek shine
In even monochrome and curving line Of imperturbable serenity.
How shall I link such sun-cast symmetry
With the torn troubled form I know as thine,
That profile, placid as a brow divine,
With continents of moil and misery?

Truth is better disengaged from error than torn from it.

Volcanic action is essentially paroxysmal; yet Mr. Lyell will admit no greater paroxysms than we ourselves have witnessedno periods of feverish spasmodic energy, during which the very framework of nature has been convulsed and torn asunder. The utmost movements that he allows are a slight quivering of her muscular integuments.

We might expect that as we come close upon living nature the characters of our old records would grow legible and clear; but just when we begin to enter on the history of the physical changes going on before our eyes, and in which we ourselves bear a part, our chronicle seems to fail us: a leaf has been torn out from Natures book, and the succession of events is almost hidden from our eyes. [On gaps in the Pleistocene fossil record.]

As quoted by Hugh Miller in Lecture First, collected in Popular Geology: A Series of Lectures Read Before the Philosophical Institution of Edinburgh, with Descriptive Sketches from a Geologist's Portfolio (1859), 82-83.

We must in imagination sweep off the drifted matter that clogs the surface of the ground; we must suppose all the covering of moss and heath and wood to be torn away from the sides of the mountains, and the green mantle that lies near their feet to be lifted up; we may then see the muscular integuments, and sinews, and bones of our mother Earth, and so judge of the part played by each of them during those old convulsive movements whereby her limbs were contorted and drawn up into their present posture.

Letter 2 to William Wordsworth. Quoted in the appendix to W. Wordsworth, A Complete Guide to the Lakes, Comprising Minute Direction for the Tourist, with Mr Wordsworth's Description of the Scenery of the County and Three Letters upon the Geology of the Lake District (1842), 15.