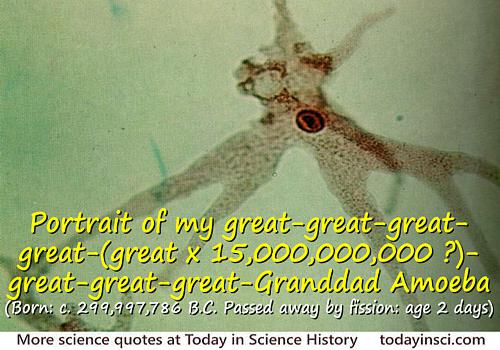 Ode to The Amoeba
Recall from Time's abysmal chasm
That piece of primal protoplasm
The First Amoeba, strangely splendid,
From whom we're all of us descended.
That First Amoeba, weirdly clever,
Exists today and shall forever,
Because he reproduced by fission;
He split himself, and each division
And subdivision deemed it fitting
To keep on splitting, splitting, splitting;
So, whatsoe'er their billions be,
All, all amoebas still are he.
Zoologists discern his features
In every sort of breathing creatures,
Since all of every living species,
No matter how their breed increases
Or how their ranks have been recruited,
From him alone were evoluted.
King Solomon, the Queen of Sheba
And Hoover sprang from that amoeba;
Columbus, Shakespeare, Darwin, Shelley
Derived from that same bit of jelly.
So famed is he and well-connected,
His statue ought to be erected,
For you and I and William Beebe
Are undeniably amoebae! 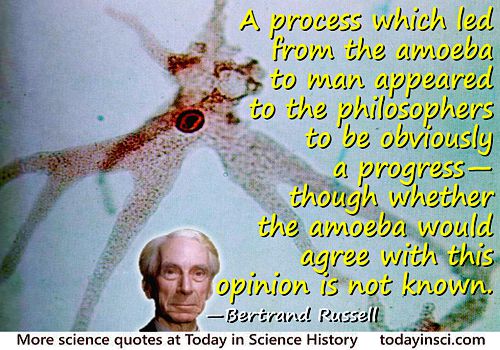 A process which led from the amoeba to man appeared to the philosophers to be obviously a progressthough whether the amoeba would agree with this opinion is not known.

From 'Current Tendencies', delivered as the first of a series of Lowell Lectures in Boston (Mar 1914). Collected in Our Knowledge of the External World (1914), 12.

Amoeba has her picture in the book,
Proud Protozoon!Yet beware of pride,
All she can do is fatten and divide;
She cannot even read, or sew, or cook
The Worm can crawl
But has no eyes to look.
The Jelly-fish can swim
But lacks a bride.

Amoebas at the start Were not complex; They tore themselves apart And started Sex.

Do you think that the amoeba ever dreamed that it would evolve into the frog? Of course it didnt. And when that first frog shimmied out of the water and employed its vocal chords in order to attract a mate or to retard a predator, do you think that that frog ever imagined that that incipient croak would evolve into all the languages of the world, into all the literature of the world? Of course it  didnt. And just as that froggy could never possibly have conceived of Shakespeare, so we can never possibly imagine our destiny.

Fictional character, Johnny, in the movie Naked (1993), written and directed by Mike Leigh. 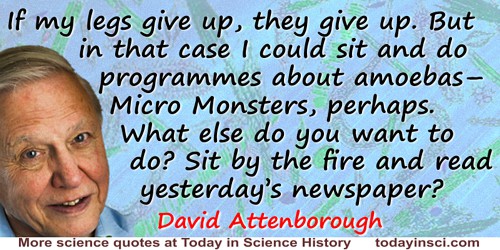 If my legs give up, they give up. But in that case I could sit and do programmes about amoebasMicro Monsters, perhaps. What else do you want to do? Sit by the fire and read yesterdays newspaper?

Intellectual work is an act of creation. It is as if the mental image that is studied over a period of time were to sprout appendages like an amebaoutgrowths that extend in all directions while avoiding one obstacle after anotherbefore interdigitating with related ideas.

Is it absurd to imagine that our social behavior, from amoeba to man, is also planned and dictated, from stored Information, by the cells? And that the time has come for men to be entrusted with the task, through heroic efforts, of bringing life to other worlds?

It has occurred to me that possibly the white corpuscles may have the office of picking up and digesting bacterial organisms when by any means they find their way into the blood. The propensity exhibited by the leukocytes for picking up inorganic granules is well known, and that they may be able not only to pick up but to assimilate, and so dispose of, the bacteria which come in their way does not seem to me very improbable in view of the fact that amoebae, which resemble them so closely, feed upon bacteria and similar organisms.

'A Contribution to the Study of the Bacterial Organisms Commonly Found Upon Exposed Mucous Surfaces and in the Alimentary Canal of Healthy Individuals', Studies from the Biological Laboratory (1883), 2, 175.

Life arose as a living molecule or protogene, the progression from this stage to that of the ameba is at least as great as from ameba to man. All the essential problems of living organisms are already solved in the one-celled (or, as many now prefer to say, noncellular) protozoan and these are only elaborated in man or the other multicellular animals. The step from nonlife to life may not have been so complex, after all, and that from cell to multicellular organism is readily comprehensible. The change from protogene to protozoan was probably the most complex that has occurred in evolution, and it may well have taken as long as the change from protozoan to man.

The Meaning of Evolution: A Study of the History of Life and of its Significance for Man (1949), 16

Most educated people are aware that we're the outcome of nearly 4 billion years of Darwinian selection, but many tend to think that humans are somehow the culmination. Our sun, however, is less than halfway through its lifespan. It will not be humans who watch the sun's demise, 6 billion years from now. Any creatures that then exist will be as different from us as we are from bacteria or amoebae. 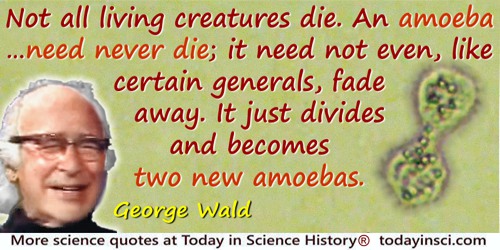 Not all living creatures die. An amoeba, for example, need never die; it need not even, like certain generals, fade away. It just divides and becomes two new amoebas.

The amoeba had the architectural ideas of R. Buckminster Fuller before there was anyone around capable of having an idea. 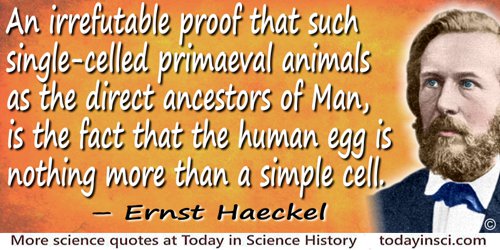 The ancestors of the higher animals must be regarded as one-celled beings, similar to the Ambæ which at the present day occur in our rivers, pools, and lakes. The incontrovertible fact that each human individual develops from an egg, which, in common with those of all animals, is a simple cell, most clearly proves that the most remote ancestors of man were primordial animals of this sort, of a form equivalent to a simple cell. When, therefore, the theory of the animal descent of man is condemned as a horrible, shocking, and immoral doctrine, tho unalterable fact, which can be proved at any moment under the microscope, that the human egg is a simple cell, which is in no way different to those of other mammals, must equally be pronounced horrible, shocking, and immoral.

The difference between the amoeba and Einstein is that, although both make use of the method of trial and error elimination, the amoeba dislikes erring while Einstein is intrigued by it.

In Objective Knowledge: An Evolutionary Approach (1972), 70. As cited in Alexander Naraniecki, Returning to Karl Popper: A Reassessment of his Politics and Philosophy (2014), 89, footnote.

Well, basically, there was this little dot, right? And the dot went bang and the bang expanded. Energy formed into matter, matter cooled, matter lived, the amoeba to fish, to fish to fowl, to fowl to frog, to frog to mammal, the mammal to monkey, to monkey to man, amo amas amat, quid pro quo, memento mori, ad infinitum, sprinkle on a little bit of grated cheese and leave under the grill till Doomsday.

Fictional characters, Johnny, replying to Louises question How did you get here? in the movie Naked (1993), written and directed by Mike Leigh. As quoted in Wendy Ellen Everett and Axel Goodbody (eds.), Revisiting Space: Space and Place in European Cinema (2005), 51.