As for the formation of matter, it is never the product of sudden events, but always the outcome of gradual change.

I am particularly concerned to determine the probability of causes and results, as exhibited in events that occur in large numbers, and to investigate the laws according to which that probability approaches a limit in proportion to the repetition of events. That investigation deserves the attention of mathematicians because of the analysis required. It is primarily there that the approximation of formulas that are functions of large numbers has its most important applications. The investigation will benefit observers in identifying the mean to be chosen among the results of their observations and the probability of the errors still to be apprehended. Lastly, the investigation is one that deserves the attention of philosophers in showing how in the final analysis there is a regularity underlying the very things that seem to us to pertain entirely to chance, and in unveiling the hidden but constant causes on which that regularity depends. It is on the regularity of the main outcomes of events taken in large numbers that various institutions depend, such as annuities, tontines, and insurance policies. Questions about those subjects, as well as about inoculation with vaccine and decisions of electoral assemblies, present no further difficulty in the light of my theory. I limit myself here to resolving the most general of them, but the importance of these concerns in civil life, the moral considerations that complicate them, and the voluminous data that they presuppose require a separate work.

I can see him [Sylvester] now, with his white beard and few locks of gray hair, his forehead wrinkled oer with thoughts, writing rapidly his figures and formulae on the board, sometimes explaining as he wrote, while we, his listeners, caught the reflected sounds from the board. But stop, something is not right, he pauses, his hand goes to his forehead to help his thought, he goes over the work again, emphasizes the leading points, and finally discovers his difficulty. Perhaps it is some error in his figures, perhaps an oversight in the reasoning. Sometimes, however, the difficulty is not elucidated, and then there is not much to the rest of the lecture. But at the next lecture we would hear of some new discovery that was the outcome of that difficulty, and of some article for the Journal, which he had begun. If a text-book had been taken up at the beginning, with the intention of following it, that text-book was most likely doomed to oblivion for the rest of the term, or until the class had been made listeners to every new thought and principle that had sprung from the laboratory of his mind, in consequence of that first difficulty. Other difficulties would soon appear, so that no text-book could last more than half of the term. In this way his class listened to almost all of the work that subsequently appeared in the Journal. It seemed to be the quality of his mind that he must adhere to one subject. He would think about it, talk about it to his class, and finally write about it for the Journal. The merest accident might start him, but once started, every moment, every thought was given to it, and, as much as possible, he read what others had done in the same direction; but this last seemed to be his real point; he could not read without finding difficulties in the way of understanding the author. Thus, often his own work reproduced what had been done by others, and he did not find it out until too late.
A notable example of this is in his theory of cyclotomic functions, which he had reproduced in several foreign journals, only to find that he had been greatly anticipated by foreign authors. It was manifest, one of the critics said, that the learned professor had not read Rummers elementary results in the theory of ideal primes. Yet Professor Smiths report on the theory of numbers, which contained a full synopsis of Kummers theory, was Professor Sylvesters constant companion.
This weakness of Professor Sylvester, in not being able to read what others had done, is perhaps a concomitant of his peculiar genius. Other minds could pass over little difficulties and not be troubled by them, and so go on to a final understanding of the results of the author. But not so with him. A difficulty, however small, worried him, and he was sure to have difficulties until the subject had been worked over in his own way, to correspond with his own mode of thought. To read the work of others, meant therefore to him an almost independent development of it. Like the man whose pleasure in life is to pioneer the way for society into the forests, his rugged mind could derive satisfaction only in hewing out its own paths; and only when his efforts brought him into the uncleared fields of mathematics did he find his place in the Universe.

If I get the impression that Nature itself makes the decisive choice [about] what possibility to realize, where quantum theory says that more than one outcome is possible, then I am ascribing personality to Nature, that is to something that is always everywhere. [An] omnipresent eternal personality which is omnipotent in taking the decisions that are left undetermined by physical law is exactly what in the language of religion is called God.

It makes sense to ask a young researcher in basic research what he is trying to find out, what sort of knowledge he hopes to have at the end of his program which does not now exist.  But it makes no sense to ask him just how he is going to do it, what it will cost, or how long it will take. If he knew the answers it would not be basic research.

Most educated people are aware that we're the outcome of nearly 4 billion years of Darwinian selection, but many tend to think that humans are somehow the culmination. Our sun, however, is less than halfway through its lifespan. It will not be humans who watch the sun's demise, 6 billion years from now. Any creatures that then exist will be as different from us as we are from bacteria or amoebae.

Science is the outcome of being prepared to live without certainty and therefore a mark of maturity. It embraces doubt and loose ends.

The complexity of the world is the outcome of huge numbers of sometimes conflicting simple events.

The engineers, working in conjunction with the scientists, can win wars, or decide their outcome, sooner than the soldiers.

Explaining Napoleons remark to Gaspard Gourgaud that Engineers are more clever than artillerymen. With co-author Harold Orel, in 'How to Make Technical Writing Easy', Professional Engineer (1958), 29, 18.

The outcome of any serious research can only be to make two questions grow where only one grew before.

'Evolution of the Scientific Point of View', essay, collected in The Place of Science in Modern Civilisation and Other Essays (1919), 33. 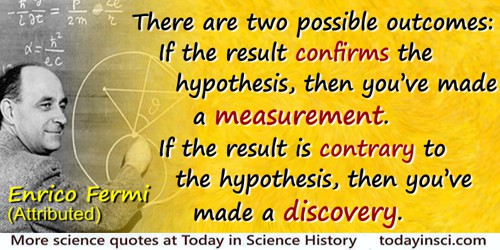 Attributed. Found in various sources, but without citation, for example in Nancy Trautmann, Assessing Toxic Risk: Teacher Edition (2001), 29. Also rephrased as Experimental confirmation of a prediction is merely a measurement. An experiment disproving a prediction is a discovery, as given elsewhere on this page. Webmaster has been unable to find an original source for a direct quote with either wording. If you know the primary source, please contact Webmaster.