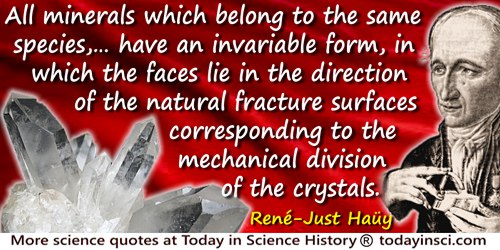 A casual glance at crystals may lead to the idea that they were pure sports of nature, but this is simply an elegant way of declaring ones ignorance. With a thoughtful examination of them, we discover laws of arrangement. With the help of these, calculation portrays and links up the observed results. How variable and at the same time how precise and regular are these laws! How simple they are ordinarily, without losing anything of their significance! The theory which has served to develop these laws is based entirely on a fact, whose existence has hitherto been vaguely discerned rather than demonstrated. This fact is that in all minerals which belong to the same species, these little solids, which are the crystal elements and which I call their integrant molecules, have an invariable form, in which the faces lie in the direction of the natural fracture surfaces corresponding to the mechanical division of the crystals. Their angles and dimensions are derived from calculations combined with observation.

Can any thoughtful person admit for a moment that, in a society so constituted that these overwhelming contrasts of luxury and privation are looked upon as necessities, and are treated by the Legislature as matters with which it has practically nothing do, there is the smallest probability that we can deal successfully with such tremendous social problems as those which involve the marriage tie and the family relation as a means of promoting the physical and moral advancement of the race? What a mockery to still further whiten the sepulchre of society, in which is hidden all manner of corruption, with schemes for the moral and physical advancement of the race!

Dibdin said: I see you've put your own name at the top of your paper, Mr Woods. His eyes looked sad and thoughtful. I always make it a matter of principle to put my name as well on every paper that comes out of the department. Yours? Albert said incredulously. Yes,said Dibdin, still sad and thoughtful. I make it a matter of principle, Mr Woods. And I like my name to come firstit makes it easier for purposes of identification. He rounded it off. First come, first served.

Do not enter upon research unless you can not help it. Ask yourself the why of every statement that is made and think out your own answer. If through your thoughtful work you get a worthwhile idea, it will get you. The force of the conviction will compel you to forsake all and seek the relief of your mind in research work.

From Cameron Prize Lecture (1928), delivered before the University of Edinburgh. As quoted in J.B. Collip 'Frederick Grant Banting, Discoverer of Insulin', The Scientific Monthly (May 1941), 52, No. 5, 473.

Every thoughtful man who hopes for the creation of a contemporary culture knows that this hinges on one central problem: to find a coherent relation between science and the humanities.

With co-author Bruce Mazlish, in The Western Intellectual Tradition (1960).

Hast thou ever raised thy mind to the consideration of existence, in and by itself, as the mere act of existing?
Hast thou ever said to thyself thoughtfully it is! heedless, in that moment, whether it were a man before thee, or a flower, or a grain of sand;without reference, in short, to this or that particular mode or form of existence? If thou hast, indeed, attained to this, thou wilt have felt the presence of a mystery, which must have fixed thy spirit in awe and wonder.

Hypotheses are cradle-songs by which the teacher lulls his scholars to sleep. The thoughtful and honest observer is always learning more and more of his limitations; he sees that the further knowledge spreads, the more numerous are the problems that make their appearance.

Know thyself! This is the source of all wisdom, said the great thinkers of the past, and the sentence was written in golden letters on the temple of the gods. To know himself, Linnæus declared to be the essential indisputable distinction of man above all other creatures. I know, indeed, in study nothing more worthy of free and thoughtful man than the study of himself. For if we look for the purpose of our existence, we cannot possibly find it outside ourselves. We are here for our own sake.

Never doubt that a small group of thoughtful, committed citizens can change the world; indeed, it is the only thing that ever has.

Although this quote is frequently seen, the quotation does not appear in any of Meads published work, and may have first appeared in one of her public speeches, perhaps, some say, in her speech at the Earth Day celebration in 1970. As stated by Nancy Lutkehaus, 'Margaret Mead: Public Anthropologist', Anthropology Now (Apr 2009), 1, No. 1, 34.

Our knowledge of stars and interstellar matter must be based primarily on the electromagnetic radiation which reaches us. Nature has thoughtfully provided us with a universe in which radiant energy of almost all wave lengths travels in straight lines over enormous distances with usually rather negligible absorption.

The combination in time and space of all these thoughtful conceptions [of Nature] exhibits not only thought, it shows also premeditation, power, wisdom, greatness, prescience, omniscience, providence. In one word, all these facts in their natural connection proclaim aloud the One God, whom man may know, adore, and love; and Natural History must in good time become the analysis of the thoughts of the Creator of the Universe.

To be genuinely thoughtful, we must be willing to sustain and protract that state of doubt which is the stimulus to thorough enquiry, so as not to accept an idea or make a positive assertion of a belief, until justifying reasons have been found.

While religion prescribes brotherly love in the relations among the individuals and groups, the actual spectacle more resembles a battlefield than an orchestra. Everywhere, in economic as well as in political life, the guiding principle is one of ruthless striving for success at the expense of ones fellow men. This competitive spirit prevails even in school and, destroying all feelings of human fraternity and cooperation, conceives of achievement not as derived from the love for productive and thoughtful work, but as springing from personal ambition and fear of rejection.

[Having already asserted his opposition to communism in every respect by signing the regents' oath, his answer to a question why a non-Communist professor should refuse to take a non-Communist oath as a condition of University employment was that to do so would imply it was] up to an accused person to clear himself. ... That sort of thing is going on in Washington today and is a cause of alarm to thoughtful citizens. It is the method used in totalitarian countries. It sounds un-American to people who dont like to be pushed around. If someone says I ought to do a certain thing the burden should be on him to show I why I should, not on me to show why I should not.