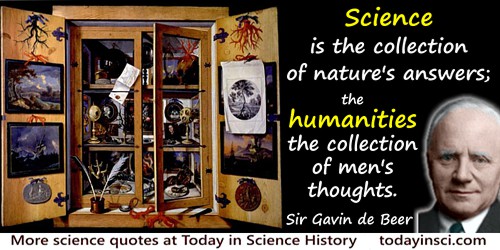 Anthropology is the most humanistic of the sciences and the most scientific of the humanities.

As for types like my own, obscurely motivated by the conviction that our existence was worthless if we didnâ€™t make a turning point of it, we were assigned to the humanities, to poetry, philosophy, paintingâ€”the nursery games of humankind, which had to be left behind when the age of science began. The humanities would be called upon to choose a wallpaper for the crypt, as the end drew near.

In Science and the Humanities: The Rickman Godlee Lecture Delivered At University College London 25 October 1956 (1956), 12.

Every thoughtful man who hopes for the creation of a contemporary culture knows that this hinges on one central problem: to find a coherent relation between science and the humanities.

With co-author Bruce Mazlish, in The Western Intellectual Tradition (1960).

Fields of learning are surrounded ultimately only by illusory boundariesâ€”like the â€śroomsâ€ť in a hall of mirrors.
It is when the illusion is penetrated that progress takes place. â€¦ Likewise science cannot be regarded as a thing apart, to be studied, admired or ignored. It is a vital part of our culture, our culture is part of it, it permeates our thinking, and its continued separateness from what is fondly called â€śthe humanitiesâ€ť is a preposterous practical joke on all thinking men.

History without the history of science, to alter slightly an apothegm of Lord Bacon, resembles a statue of Polyphemus without his eyeâ€”that very feature being left out which most marks the spirit and life of the person. My own thesis is complementary: science taught ... without a sense of history is robbed of those very qualities that make it worth teaching to the student of the humanities and the social sciences.

Humanities are inseparable from human creations, whether these be philosophic, scientific, technical, or artistic and literary. They exist in everything to which men have imparted their virtues or vices, their joys or sufferings. There are blood and tears in geometry as well as in art, blood and tears but also innumerable joys, the purest that men can experience themselves or share with others.

In A History of Science: Hellenistic Science and Culture in the Last Three Centuries B.C. (1959), ix.

I am ashamed to say that C. P. Snow's â€śtwo culturesâ€ť debate smoulders away. It is an embarrassing and sterile debate, but at least it introduced us to Medawar's essays. Afterwards, not even the most bigoted aesthete doubted that a scientist could be every inch as cultivated and intellectually endowed as a student of the humanities.

I feel very strongly indeed that a Cambridge education for our scientists should include some contact with the humanistic side. The gift of expression is important to them as scientists; the best research is wasted when it is extremely difficult to discover what it is all about ... It is even more important when scientists are called upon to play their part in the world of affairs, as is happening to an increasing extent.

From essay in Thomas Rice Henn, The Apple and the Spectroscope: Being Lectures on Poetry Designed (in the Main) for Science Students (1951), 142.

Our failure to discern a universal good does not record any lack of insight or ingenuity, but merely demonstrates that nature contains no moral messages framed in human terms. Morality is a subject for philosophers, theologians, students of the humanities, indeed for all thinking people. The answers will not be read passively from nature; they do not, and cannot, arise from the data of science. The factual state of the world does not teach us how we, with our powers for good and evil, should alter or preserve it in the most ethical manner.

Praise up the humanities, my boy. That will make them think that you are broad-minded.

On poster for humanities relevancy produced by the College of Humanities, University of Utah.

The adequate study of culture, our own and those on the opposite side of the globe, can press on to fulfillment only as we learn today from the humanities as well as from the sciences.

The humanities and science are not in inherent conflict but have become separated in the twentieth century. Now their essential unity must be re-emphasized so that 20th Century multiplicity may become 20th Century unity.

The theoretical broadening which comes from having many humanities subjects on the campus is offset by the general dopiness of the people who study these things and by the Department of Home Economics.

There are few humanities that could surpass in discipline, in beauty, in emotional and aesthetic satisfaction, those humanities which are called mathematics, and the natural sciences.

There is no â€śpureâ€ť science itself divorced from human values. The importance of science to the humanities and the humanities to science in their complementary contribution to the variety of human life grows daily. The need for men familiar with both is imperative.

When science makes minor mysteries disappear, greater mysteries stand confessed. For one object of delight whose emotional value science has inevitably lessenedâ€”as Newton damaged the rainbow for Keatsâ€”science gives back double. To the grand primary impressions of the world­power, the immensities, the pervading order, and the universal flux, with which the man of feeling has been nurtured from of old, modern science has added thrilling impressions of manifoldness, intricacy, uniformity, inter-relatedness, and evolution. Science widens and clears the emotional window. There are great vistas to which science alone can lead, and they make for elevation of mind. The opposition between science and feeling is largely a misunderstanding. As one of our philosophers has remarked, science is in a true sense 'one of the humanities.'

[A man] must learn to understand the motives of human beings, their illusions, and their sufferings human beings, their illusions, and their sufferings in order to acquire a proper relationship to individual fellow-men and to the community. These precious things â€¦ primarily constitutes and preserves culture. This is what I have in mind when I recommend the â€śhumanitiesâ€ť as important, not just dry specialized knowledge in the fields of history and philosophy.