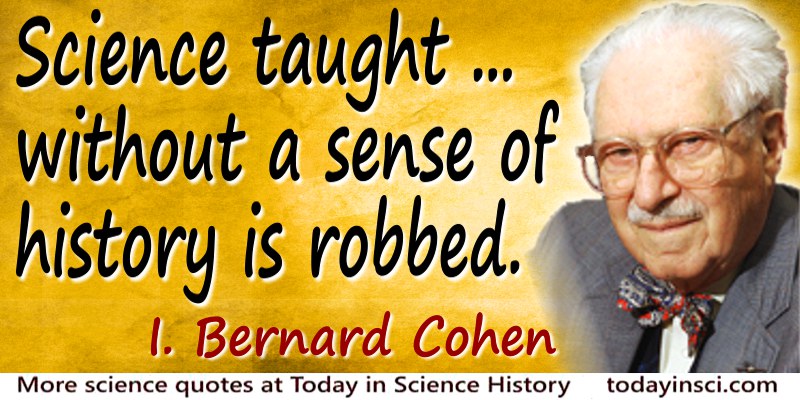 “Science taught ... without a sense of history is robbed.”
— I. Bernard Cohen
From 'The History of Science and the Teaching of Science' (1952).

This quote comes from the collection General Education in Science edited by I. Bernard Cohen with Fletcher G. Watson. It appears in an essay by Cohen, 'The History of Science and the Teaching of Science', in which he writes:

“History without the history of science, to alter slightly an apothegm of Lord Bacon, resembles a statue of Polyphemus without his eye—that very feature being left out which most marks the spirit and life of the person. My own thesis is complementary: science taught … without a sense of history is robbed of those very qualities that make it worth teaching to the student of the humanities and the social sciences.”

Polyphemus appears in Greek mythology as a man-eating Cyclops giant, whose notable feature is a single orb-shaped eye set in the middle of his forehead. The reference which Cohen paraphrased, is in Francis Bacon’s, The Advancement of Learning, which contains the original statement:

“History is natural, civil, ecclesiastical, and literary; whereof the first three I allow as extant, the fourth I note as deficient. For no man hath propounded to himself the general state of learning to be described and represented from age to age, as many have done the works of Nature, and the state, civil and ecclesiastical; without which the history of the world seemeth to me to be as the statue of Polyphemus with his eye out, that part being wanting which doth most show the spirit and life of the person.”1

An apothegm is an aphorism: a short, pithy, and instructive saying or formulation. The word derives from the Greek word, apophthengesthai to speak out (from apo- + phthengesthai to utter).2


'The History of Science and the Teaching of Science', in I. Bernard Cohen and Fletcher G. Watson (eds.), General Education in Science (1952), 71.