Quoted by William Lord in The Times (22 Jan 1997), remarking on the competitiveness between the Physics and Chemistry Departments at the University of Cambridge.

But no pursuit at Cambridge was followed with nearly so much eagerness or gave me so much pleasure as collecting beetles. It was the mere passion for collecting, for I did not dissect them, and rarely compared their external characters with published descriptions, but got them named anyhow. I will give a proof of my zeal: one day, on tearing off some old bark, I saw two rare beetles, and seized one in each hand; then I saw a third and new kind, which I could not bear to lose, so that I popped the one which I held in my right hand into my mouth. Alas! it ejected some intensely acrid fluid, which burnt my tongue so that I was forced to spit the beetle out, which was lost, as was the third one.

In Charles Darwin and Francis Darwin (ed.), Charles Darwin: His Life Told in an Autobiographical Chapter, and in a Selected Series of His Published Letters (1892), 20.

I am terribly proud ofI was born in Cambridge in 1952 and my initials are DNA!

I feel very strongly indeed that a Cambridge education for our scientists should include some contact with the humanistic side. The gift of expression is important to them as scientists; the best research is wasted when it is extremely difficult to discover what it is all about ... It is even more important when scientists are called upon to play their part in the world of affairs, as is happening to an increasing extent.

From essay in Thomas Rice Henn, The Apple and the Spectroscope: Being Lectures on Poetry Designed (in the Main) for Science Students (1951), 142. 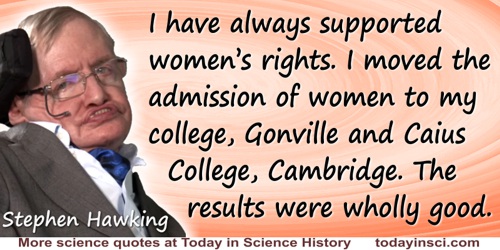 I have always supported womens rights. I moved the admission of women to my college, Gonville and Caius College, Cambridge. The results were wholly good.

I must not pass by Dr. Young called Phaenomenon Young at Cambridge. A man of universal erudition, & almost universal accomplishments. Had he limited himself to anyone department of knowledge, he must have been first in that department. But as a mathematician, a scholar, a hieroglyphist, he was eminent; & he knew so much that it is difficult to say what he did not know. He was a most amiable & good-tempered man; too fond, perhaps, of the society of persons of rank for a true philosopher.

In 1945 J.A. Ratcliffe  suggested that I [join his group at Cavendish Laboratory, Cambridge] to start an investigation of the radio emission from the Sun, which had recently been discovered accidentally with radar equipment.  [B]oth Ratcliffe and Sir Lawrence Bragg, then Cavendish Professor, gave enormous support and encouragement to me. Braggs own work on X-ray crystallography involved techniques very similar to those we were developing for aperture synthesis, and he always showed a delighted interest in the way our work progressed.

Oxford and Cambridge. The dons are too busy educating the young men to be able to teach them anything.

Sir Isaac Newton and Dr. Bentley met accidentally in London, and on Sir Isaacs inquiring what philosophical pursuits were carrying on at Cambridge, the doctor repliedNonefor when you go a hunting Sir Isaac, you kill all the game; you have left us nothing to pursue.Not so, said the philosopher, you may start a variety of game in every bush if you will but take the trouble to beat for it.

From Richard Watson, Chemical Essays (1786, 1806), Vol. 4, 257-258. No citation given, soassuming it is more or less authenticWebmaster offers this outright guess. Watson was the source of another anecdote about Newton (see I find more sure marks). Thus, one might by pure speculation wonder if this quote was passed along in the same way. Was this another anecdote relayed to Watson by his former teacher, Dr. Robert Smith (Master of Trinity House), who might have been told this by Newton himself? Perhaps well never know, but if you know a primary source, please contact Webmaster.

The landed classes neglected technical education, taking refuge in classical studies; as late as 1930, for example, long after Ernest Rutherford at Cambridge had discovered the atomic nucleus and begun transmuting elements, the physics laboratory at Oxford had not been wired for electricity. Intellectual neglect technical education to this day.
[Describing C.P. Snow's observations on the neglect of technical education.]

The large collection of problems which our modern Cambridge books supply will be found to be almost an exclusive peculiarity of these books; such collections scarcely exist in foreign treatises on mathematics, nor even in English treatises of an earlier date. This fact shows, I think, that a knowledge of mathematics may be gained without the perpetual working of examples.  Do not trouble yourselves with the examples, make it your main business, I might almost say your exclusive business, to understand the text of your author.