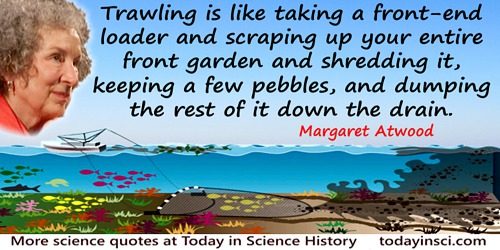 A huge net is being dragged across the sea floor, destroying everything in its path. Ahead of it bloom undersea forests and their hundreds and thousands of living creatures, both plant and animal; behind it is a desert. The net is pulled to the surface and most of the dead and dying life forms in it are thrown out. A few marketable species are retained. [Trawling] is like taking a front-end loader and scraping up your entire front garden and shredding it, keeping a few pebbles, and dumping the rest of it down the drain.

However much we may enlarge our ideas of the time which has elapsed since the Niagara first began to drain the waters of the upper lakes, we have seen that this period was one only of a series, all belonging to the present zoological epoch; or that in which the living testaceous fauna, whether freshwater or marine, had already come into being. If such events can take place while the zoology of the earth remains almost stationary and unaltered, what ages may not be comprehended in those successive tertiary periods during which the Flora and Fauna of the globe have been almost entirely changed. Yet how subordinate a place in the long calendar of geological chronology do the successive tertiary periods themselves occupy! How much more enormous a duration must we assign to many antecedent revolutions of the earth and its inhabitants! No analogy can be found in the natural world to the immense scale of these divisions of past time, unless we contemplate the celestial spaces which have been measured by the astronomer.

My method consists in allowing the mind to play freely for a very brief period, until a couple or so of ideas have passed through it, and then, while the traces or echoes of those ideas are still lingering in the brain, to turn the attention upon them with a sudden and complete awakening; to arrest, to scrutinise them, and to record their exact appearance... The general impression they have left upon me is like that which many of us have experienced when the basement of our house happens to be under thorough sanitary repairs, and we realise for the first time the complex system of drains and gas and water pipes, flues, bell-wires, and so forth, upon which our comfort depends, but which are usually hidden out of sight, and with whose existence, so long as they acted well, we had never troubled ourselves.

The Earthworm plows the whole world with his tunnels, drains and aerates the earth If you ever buy any land, be sure it has plenty of Earthworms toiling and moiling all day so that you can sit down and relax. (1949)

The known is finite, the unknown infinite; spiritually we find ourselves on a tiny island in the middle of a boundless ocean of the inexplicable. It is our task, from generation to generation, to drain a small amount of additional land.

As given in Herbert and W. Roesky and Klaud Möckel, translated from the original German by T.N. Mitchell and W.E. Russey, Chemical Curiosities: Spectacular Experiments and Inspired Quotes (1996), 212. It is a restatement of an original quote from concluding remarks to a chapter by Thomas Huxley, 'On the Reception of the Origin of Species', the last chapter in Charles Darwin and Francis Darwin (ed.), The Life and Letters of Charles Darwin (1887), Vol. 1, 557. Webmaster suggests, the original Huxley quote was translated for the original German text, and when that was translated for the English edition, the quote morphed into into the form above.

The universality of parasitism as an offshoot of the predatory habit negatives the position taken by man that it is a pathological phenomenon or a deviation from the normal processes of nature. The pathological manifestations are only incidents in a developing parasitism. As human beings intent on maintaining man's domination over nature we may regard parasitism as pathological insofar as it becomes a drain upon human resources. In our efforts to protect ourselves we may make every kind of sacrifice to limit, reduce, and even eliminate parasitism as a factor in human life. Science attempts to define the terms on which this policy of elimination may or may not succeed. We must first of all thoroughly understand the problem, put ourselves in possession of all the facts in order to estimate the cost. Too often it has been assumed that parasitism was abnormal and that it needed only a slight force to reestablish what was believed to be a normal equilibrium without parasitism. On the contrary, biology teaches us that parasitism is a normal phenomenon and if we accept this view we shall be more ready to pay the price of freedom as a permanent and ever recurring levy of nature for immunity from a condition to which all life is subject. The greatest victory of man over nature in the physical realm would undoubtedly be his own delivery from the heavy encumbrance of parasitism with which all life is burdened.

You dont ask the frogs when you drain the marsh.

a director of Electricite de France, when asked if the public was consulted on the siting of a nuclear power station, in The Guardian, 1986.