Early to bed and early to rise, makes a man healthy wealthy and wise.

I with my hammer pounding evermore
The rocky coast, smite Andes into dust.
Strewing my bed and, in another age.
Rebuild a continent for better men.

Ideas are elusive, slippery things. Best to keep a pad of paper and a pencil at your bedside, so you can stab them during the night before they get away.

As quoted, without citation, in Cleophus Jackson, Reprogram Your Mind for Success and Happiness (2001), 150.

Im so fast that last night I turned off the light switch in my hotel room and was in bed before the room was dark.

In epigraph, without citation, in The Great American Sports Book: A Casual But Voluminous Look at American Spectator Sports from the Civil War to the Present Time (1978), 282.

Men of Science. If they are worthy of the name they are indeed about God's path and about his bed and spying out all his ways.

Neutrinos, they are very small
They have no charge and have no mass
And do not interact at all.
The earth is just a silly ball
To them, through which they simply pass,Like dustmaids down a drafty hall
Or photons through a sheet of glass.
They snub the most exquisite gas,
Ignore the most substantial wall,
Cold-shoulder steel and sounding brass,
Insult the stallion in his stall,
And, scorning barriers of class,
Infiltrate you and me! Like tall
And painless guillotines, they fall
Down through our heads into the grass.
At night, they enter at Nepal
And pierce the lover and his lass
From underneath the bedyou call
It wonderful; I call it crass.

In poem 'Cosmic Gall', The New Yorker (17 Dec 1960). Collected in Telephone Poles and Other Poems (1964), 5. Note: In fact, about 1014 neutrinos from the Sun and 103 neutrinos in cosmic rays pass through our bodies each second. Neutrinos are now known to have a very small amount of mass, and they do interact (through the weak force).

Nurses that attend lying-in women ought to have provided, and in order, every thing that may be necessary for the woman, accoucheur, midwife, and child; such as linnen and cloaths, well aired and warm, for the woman and the bed, which she must know how to prepare when there is occasion; together with nutmeg, sugar, spirit of hartshorn, vinegar, Hungary water, white or brown caudle ready made, and a glyster-pipe fitted.

The book of Nature is the book of Fate. She turns the gigantic pages,leaf after leaf,never re-turning one. One leaf she lays down, a floor of granite; then a thousand ages, and a bed of slate; a thousand ages, and a measure of coal; a thousand ages, and a layer of marl and mud: vegetable forms appear; her first misshapen animals, zoophyte, trilobium, fish; then, saurians,rude forms, in which she has only blocked her future statue, concealing under these unwieldy monsters the fine type of her coming king. The face of the planet cools and dries, the races meliorate, and man is born. But when a race has lived its term, it comes no more again.

From 'Fate', collected in The Complete Works of Ralph Waldo Emerson, Volume 6: The Conduct of Life (1860), 15. This paragraph is the prose version of his poem, 'Song of Nature'.

The sun is not a-bed, when I
At night upon my pillow lie;
Still round the earth his way he takes,
And morning after morning makes.

The theory of punctuated equilibrium, proposed by Niles Eldredge and myself, is not, as so often misunderstood, a radical claim for truly sudden change, but a recognition that ordinary processes of speciation, properly conceived as glacially slow by the standard of our own life-span, do not resolve into geological time as long sequences of insensibly graded intermediates (the traditional, or gradualistic, view), but as geologically sudden origins at single bedding planes.

There is no bed shortage—most people have their own.

Too often a sister puts all her patients back to bed as a housewife puts all her plates back in the plate-rack—to make a generally tidy appearance. 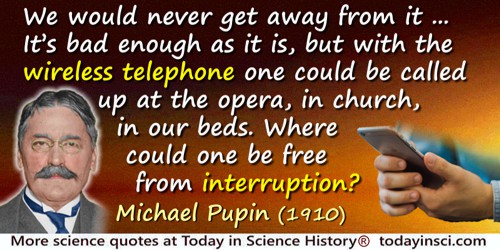 We would never get away from it.  Its bad enough as it is, but with the wireless telephone one could be called up at the opera, in church, in our beds. Where could one be free from interruption?
[Prediction about the cell phone made over a century ago.]

What doth gravity out of his bed at midnight?

[In his generation] the worst that happened to men of science was that Galileo suffered an honorable detention and a mild reproof, before dying peacefully in his bed.

As quoted in Lewis Wolpert and Alison Richards (eds.), Passionate Minds: The Inner World of Scientists (1997), 6.

[William Gull] sought to teach his students not to think they could cure disease. The best of all remedies, he would say, is a warm bed.  I can tell you something of how you get ill, but I cannot tell you how you get well.  Healing is accomplished By an operation more divine Than tongue or pen can give expression to. Remedies act best when there is a tendency to get well.