God healeth and the physician hath the thanks.

God heals, and the Doctor takes the Fees.

If the love of surgery is a proof of a persons being adapted for it, then certainly I am fitted to he a surgeon; for thou canst hardly conceive what a high degree of enjoyment I am from day to day experiencing in this bloody and butchering department of the healing art. I am more and more delighted with my profession.

In reality, I have sometimes thought that we do not go on sufficiently slowly in the removal of diseases, and that it would he better if we proceeded with less haste, and if more were often left, to Nature than is the practice now-a-days. It is a great mistake to suppose that Nature always stands in need of the assistance of Art. If that were the case, site would have made less provision for the safety of mankind than the preservation of the species demands; seeing that there is not the least proportion between the host of existing diseases and the powers possessed by man for their removal, even in those ages wherein the healing art was at the highest pitch, and most extensively cultivated.

In the deserts of the heart
Let the healing fountain start.

From last stanza of poem, 'In Memory of W.B. Yeats', (Feb 1939). In Collected Shorter Poems, 1930-1944 (1950), 67. [Note: Psychologist Arthur Lerner ended each of the poetry therapy sessions he conducted with these lines, according to obituary by Myrna Oliver, 'Arthur Lerner; Promoted Use of Poetry in Therapy', Los Angeles Times (8 Apr 1998). Webmaster]

It will never get well if you pick it.

Men today who have had an irreproachable training in the art are seen to abstain from the use of the hand as from the plague, and for this very reason, lest they should be slandered by the masters of the profession as barbers . For it is indeed above all things the wide prevalence of this hateful error that prevents us even in our age from taking up the healing art as a whole, makes us confine ourselves merely to the treatment of internal complaints, and, if I may utter the blunt truth once for all, causes us, to the great detriment of mankind, to study to be healers only in a very limited degree.

As given in George I. Schwartz and ‎Philip W. Bishop, 'Andreas Vesalius', Moments of Discovery: The Development of Modern Science (1958), Vol. 1, 521.

Only the healing art enables one to make a name for himself and at the same time give benefit to others.

Only those who regard healing as the ultimate goal of their efforts can, therefore, be designated as physicians.

Probably if half a kilogram [of radium] were in a bottle on that table it would kill us all. It would almost certainly destroy our sight and burn our skins to such an extent that we could not survive. The smallest bit placed on ones arm would produce a blister which it would need months to heal.

As quoted in 'Radium', New York Times (22 Feb 1903), 6. Note that X-rays were discovered only a few years before, in 1895, radioactivity in 1896, and the electron in 1897. Full knowledge of the harmful radiation did not exist at the time. Nevertheless, Crookes remark, in the words of the reporter, would seem to indicate that it [radium] emits something more than light. Heat and actinic energy must make up a large part of its radiation. It also emits electrons with [great] velocity 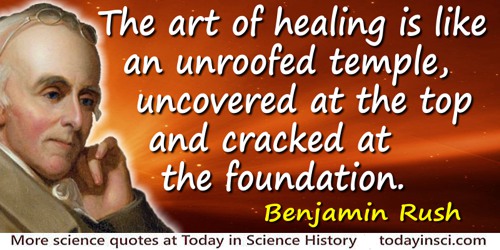 The art of healing is like an unroofed temple, uncovered at the top and cracked at the foundation.

Quoted by Isaac Jennings, in Medical Reform; a Treatise on Man's Physical Being and Disorders (1847), 33.

The body may be healed but not the mind.

The forms of diseases are many and the healing of them is manifold.

The wound is granulating well, the matter formed is diminishing in quantity and is laudable. But the wound is still deep and must be dressed from the bottom to ensure sound healing.  In view of the fact that sinister stories continue to be manufactured and to be printed, it may again be stated, as emphatically as possible, that during the operation no trace of malignant disease was observed,  His Majesty will leave Buckingham Palace for change of air shortly, and the date of the Coronation will be announced almost immediately.

In 'The Kings Progress Towards Recovery', British Medical Journal (1902), 144. The appendectomy caused the coronation of King Edward VII to be postponed.

There are two objects of medical education: To heal the sick and to advance the science.

There is symbolic as well as actual beauty in the migration of the birds, the ebb and flow of the tides, the folded bud ready for the spring. There is something infinitely healing in the repeated refrains of naturethe assurance that dawn comes after night, and spring after the winter.

They shall lay their hands on the sick, and they shall recover.
Recited by attending priest or bishop during ceremony for healing by Queen Anne's royal touch.

Thou to whom the sick and dying
Ever came, nor came in vain,
With thy healing hands replying
To their wearied cry of pain.

Visitors footfalls are like medicine; they heal the sick.

Why have  so many  eminently furnished for professional success, seen fit to give up all their professional prospects and take the almost monastic vows of the devotee to science? Doctor Louis Agassiz, Doctor Asa Gray, Doctor Jeffries Wyman, were all duly qualified to exercise the healing art. They each left its beaten road for the several paths to which they found themselves called.

[William Gull] sought to teach his students not to think they could cure disease. The best of all remedies, he would say, is a warm bed.  I can tell you something of how you get ill, but I cannot tell you how you get well.  Healing is accomplished By an operation more divine Than tongue or pen can give expression to. Remedies act best when there is a tendency to get well.

Healing, Papa would tell me, is not a science, but the intuitive art of wooing Nature.