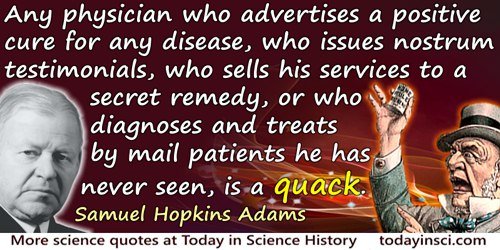 Any physician who advertises a positive cure for any disease, who issues nostrum testimonials, who sells his services to a secret remedy, or who diagnoses and treats by mail patients he has never seen, is a quack.

I despise Birth-Control first because it is ... an entirely meaningless word; and is used so as to curry favour even with those who would first recoil from its real meaning. The proceeding these quack doctors recommend does not control any birth. ... But these people know perfectly well that they dare not write the plain word Birth-Prevention, in any one of the hundred places where they write the hypocritical word Birth-Control. They know as well as I do that the very word Birth-Prevention would strike a chill into the public... Therefore they use a conventional and unmeaning word, which may make the quack medicine sound more innocuous. ... A child is the very sign and sacrament of personal freedom. He is a fresh will added to the wills of the world; he is something that his parents have freely chosen to produce ... he is their own creative contribution to creation. 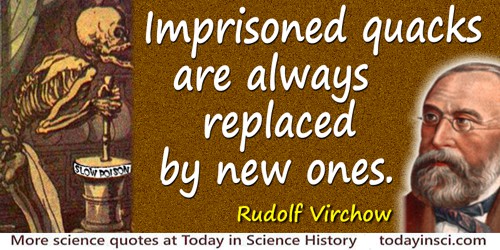 Imprisoned quacks are always replaced by new ones.

In Fielding Hudson Garrison, An Introduction to the History of Medicine (1966), 577.

In my intercourse with mankind, I have always found those who would thrust theory into practical matters to be, at bottom, men of no judgement and pure quacks.

In the fight which we have to wage incessantly against ignorance and quackery among the masses and follies of all sorts among the classes, diagnosis, not drugging, is our chief weapon of offence. Lack of systematic personal training in the methods of the recognition of disease leads to the misapplication of remedies, to long courses of treatment when treatment is useless, and so directly to that lack of confidence in our methods which is apt to place us in the eyes of the public on a level with empirics and quacks.

Address to the Canadian Medical Association, Montreal (17 Sep 1902), 'Chauvinism in Medicine', published in The Montreal Medical Journal (1902), 31, 267. Collected in Aequanimitas, with Other Addresses to Medical Students, Nurses and Practitioners of Medicine (1904), 299.

It is better to have recourse to a Quack, if he can cure our disorder, although he cannot explain it than to a Physician, if he can explain our disease but cannot cure it. 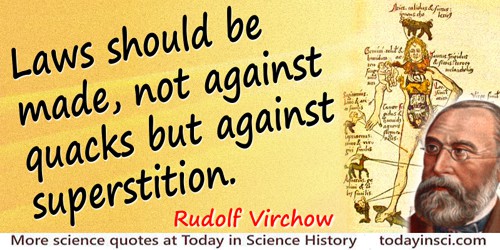 Laws should be made, not against quacks but against superstition.

In Fielding Hudson Garrison, An Introduction to the History of Medicine (1966), 577.

Some of them wanted to sell me snake oil and Im not necessarily going to dismiss all of these, as I have never found a rusty snake.

The practice of physic is jostled by quacks on the one side, and by science on the other.

As quoted I have heard him say by Sir Thomas Watson, in 'In Memoriam', The Collected Works of Dr. P.M. Latham (1878), Vol. 1, xxv. The 'In Memoriam' was reprinted from St. Bartholomews Hospital Reports, Vol. 11.

The required techniques of effective reasoning are pretty formal, but as long as programming is done by people that dont master them, the software crisis will remain with us and will be considered an incurable disease. And you know what incurable diseases do: they invite the quacks and charlatans in, who in this case take the form of Software Engineering gurus.

Very different would be the position of the profession toward homeopathy if it had aimed, like other doctrines advanced by physicians, to gain a foothold among medical men alone or chiefly, instead of making its appeal to the popular favour and against the profession.  And as its adherents do not aim simply at the establishment of a system of doctrines, but wage a war of radicalism against the profession, and seek to throw down the barricades and guard it from the intrusion of ignorance and quackery  our duty is to expel them.

Proceedings of the Connecticut Medical Society (1847), 24. Quoted by Harris L. Coulter in Divided Legacy: the Conflict Between Homeopathy and the American Medical Association (1982), 204.

We should be very jealous of who speaks for science, particularly in our age of rapidly expanding technology. How can the public be educated? I do not know the specifics, but of this I am certain: The public will remain uninformed and uneducated in the sciences until the media professionals decide otherwise. Until they stop quoting charlatans and quacks and until respected scientists speak up.

You Surgeons of London, who puzzle your Pates,
To ride in your Coaches, and purchase Estates,
Give over, for Shame, for your Pride has a Fall,
And ye Doctress of Epsom has outdone you all.

Dame Nature has given her a doctor's degree,
She gets all the patients and pockets the fee;
So if you don't instantly prove it a cheat,
She'll loll in a chariot whilst you walk the street.
Cautioning doctors about the quack bone-setter, Mrs. Mapp (d. 22 Dec 1737), who practiced in Epsom town once a week, arriving in a coach-and-four.

Verses from a song in a comedy at the Lincoln's Inn Fields Theatre, called The Husband's Relief, or The Female Bone-setter and the Worm-doctor. In Robert Chambers, The Book of Days (1832), 729.