Any man who can drive safely while kissing a pretty girl is simply not giving the kiss the attention it deserves.

I am quite aware that we have just now lightheartedly expelled in imagination many excellent men who are largely, perhaps chiefly, responsible for the buildings of the temple of science; and in many cases our angel would find it a pretty ticklish job to decide. But of one thing I feel sure: if the types we have just expelled were the only types there were, the temple would never have come to be, any more than a forest can grow which consists of nothing but creepers. For these people any sphere of human activity will do, if it comes to a point; whether they become engineers, officers, tradesmen, or scientists depends on circumstances.

I see it fall.
So beautiful and light.
So very tranquil.
Untouchable in the night.
Pretty in white.
Like the stars at night.
The twinkle from the shine.
The cold from the sky.
With every footprint left.
Every snowman made.
With every snowflake fallen.
Unique in every way.

If texts are unified by a central logic of argument, then their pictorial illustrations are integral to the ensemble, not pretty little trifles included only for aesthetic or commercial value. Primates are visual animals, and (particularly in science) illustration has a language and set of conventions all its own.

In the matter of physics, the first lessons should contain nothing but what is experimental and interesting to see. A pretty experiment is in itself often more valuable than twenty formulae extracted from our minds.

Isolated, so-called pretty theorems have even less value in the eyes of a modern mathematician than the discovery of a new pretty flower has to the scientific botanist, though the layman finds in these the chief charm of the respective Sciences.

It suddenly struck me that that tiny pea, pretty and blue, was the Earth. I put up my thumb and shut one eye, and my thumb blotted out the planet Earth. I didnt feel like a giant. I felt very, very small.

Its pretty hard to tell what does bring happiness. Poverty and wealth have both failed.

Notwithstanding all that has been discovered since Newtons time, his saying that we are little children picking up pretty pebbles on the beach while the whole ocean lies before us unexplored remains substantially as true as ever, and will do so though we shovel up the pebbles by steam shovels and carry them off in carloads.

One of the most impressive discoveries was the origin of the energy of the stars, that makes them continue to burn. One of the men who discovered this was out with his girl friend the night after he realized that nuclear reactions must be going on in the stars in order to make them shine.
She said Look at how pretty the stars shine!
He said, Yes, and right now I am the only man in the world who knows why they shine.
She merely laughed at him. She was not impressed with being out with the only man who, at that moment, knew why stars shine. Well, it is sad to be alone, but that is the way it is in this world.

Our ability to perceive quality in nature begins, as in art, with the pretty. It expands through successive stages of the beautiful to values as yet uncaptured by language.

Our inventions are wont to be pretty toys, which distract our attention from serious things. They are but improved means to an unimproved end.

The game of chess has always fascinated mathematicians, and there is reason to suppose that the possession of great powers of playing that game is in many features very much like the possession of great mathematical ability. There are the different pieces to learn, the pawns, the knights, the bishops, the castles, and the queen and king. The board possesses certain possible combinations of squares, as in rows, diagonals, etc. The pieces are subject to certain rules by which their motions are governed, and there are other rules governing the players.  One has only to increase the number of pieces, to enlarge the field of the board, and to produce new rules which are to govern either the pieces or the player, to have a pretty good idea of what mathematics consists.

The point in which I am different from most inventors is that I have, besides the usual inventors make-up, the bump of practicality as a sort of appendix, the sense of the business, money value of an invention. Oh, no, I didnt have it naturally. It was pounded into me by some pretty hard knocks.

The required techniques of effective reasoning are pretty formal, but as long as programming is done by people that dont master them, the software crisis will remain with us and will be considered an incurable disease. And you know what incurable diseases do: they invite the quacks and charlatans in, who in this case take the form of Software Engineering gurus.

They say that the best weapon is the one you never have to fire. I respectfully disagree. I prefer the weapon you only have to fire once. Thats how Dad did it, thats how America does it... and its worked out pretty well so far. I present to you the newest in Stark Industries Freedom line. Find an excuse to let one of these off the chain, and I personally guarantee, the bad guys wont even wanna come out of their caves. Ladies and gentlemen, for your consideration... the Jericho. 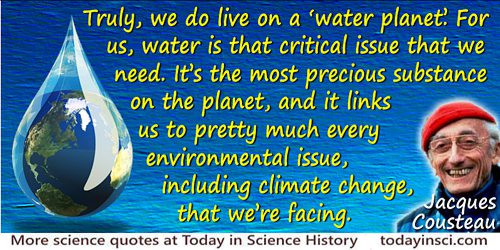 Truly, we do live on a water planet. For us, water is that critical issue that we need. Its the most precious substance on the planet, and it links us to pretty much every environmental issue, including climate change, that were facing.

[Science moves] with the spirit of an adventure characterized both by youthful arrogance and by the belief that the truth, once found, would be simple as well as pretty.