Mathematical truth has validity independent of place, personality, or human authority. Mathematical relations are not established, nor can they be abrogated, by edict. The multiplication table is international and permanent, not a matter of convention nor of relying upon authority of state or church. The value of π is not amenable to human caprice. The finding of a mathematical theorem may have been a highly romantic episode in the personal life of the discoverer, but it cannot be expected of itself to reveal the race, sex, or temperament of this discoverer. With modern means of widespread communication even mathematical notation tends to be international despite all nationalistic tendencies in the use of words or of type.

A religion old or new, that stressed the magnificence of the universe as revealed by modern science, might be able to draw forth reserves of reverence and awe hardly tapped by the conventional faiths. Sooner or later such a religion will emerge. 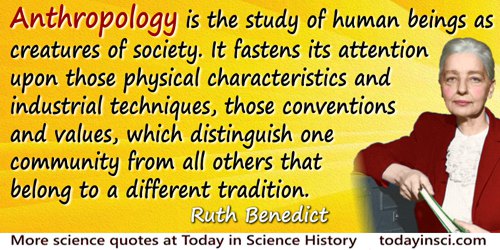 Anthropology is the study of human beings as creatures of society. It fastens its attention upon those physical characteristics and industrial techniques, those conventions and values, which distinguish one community from all others that belong to a different tradition.

Conventional people are roused to fury by departures from convention, largely because they regard such departures as a criticism of themselves.

Geometrical axioms are neither synthetic a priori conclusions nor experimental facts. They are conventions: our choice, amongst all possible conventions, is guided by experimental facts; but it remains free, and is only limited by the necessity of avoiding all contradiction. ... In other words, axioms of geometry are only definitions in disguise.
That being so what ought one to think of this question: Is the Euclidean Geometry true?
The question is nonsense. One might as well ask whether the metric system is true and the old measures false; whether Cartesian co-ordinates are true and polar co-ordinates false.

In George Edward Martin, The Foundations of Geometry and the Non-Euclidean Plane (1982), 110.

I am opposed to looking upon logic as a kind of game.  One might think that it is a matter of choice or convention which logic one adopts. I disagree with this view.

If texts are unified by a central logic of argument, then their pictorial illustrations are integral to the ensemble, not pretty little trifles included only for aesthetic or commercial value. Primates are visual animals, and (particularly in science) illustration has a language and set of conventions all its own.

In a training period I continue to believe that the best start is with the experimentally prepared situation. Principally because it is in this that it is easiest to illustrate controlled variability, but there is no compelling reason why all experiments should be shaped to the conventional forms of the psychophysical methods. In any case the psychologist must refuse to be limited by those formalised statements of scientific experiment, which grew up with the logical methodologists of the mid-19th century. There are no psychological experiments in which the conditions are all under control; in which one condition can be varied independently of the rest, or even in which the concomitant variation of two specified conditions alone can be arranged and considered.

From archive recording (3 Jun 1959) with to John C. Kenna, giving his recollection of his farewell speech to Cambridge Psychological Society (4 Mar 1952), in which he gave a summary of points he considered to be basic requirements for a good experimental psychologist. Part of point 3 of 7, from transcription of recording held at British Psychological Society History of Psychology Centre, London, as abridged on thepsychologist.bps.org.uk website.

My dynamite will sooner lead to peace than a thousand world conventions. As soon as men will find that in one instant, whole armies can be utterly destroyed, they surely will abide by golden peace.

As quoted, without citation, in Peter T. Davis and Craig R. McGuffin, Wireless Local Area Networks: Technology, Issues, and Strategies (1995), 159. Various sources since then have the quote with that wording. This shares the same sentiment - and may be an alternate translation - as Nobels quote given by Linus Pauling in his Nobel Acceptance Speech (see elsewhere on this page). Pauling in his speech said it was from a statement by Nobel in 1892, as reported by Bertha von Sutter. Webmaster has so far found no definitive print source for either version. Please contact Webmaster if you have.

Over the past fifty years or so, scientists have allowed the conventions of expression available to them to become entirely too confining. too confining. The insistence on bland impersonality and the widespread indifference to anything like the display of a unique human author in scientific exposition, have transformed the reading of most scientific papers into an act of tedious drudgery.

In Boojums All the Way Through: Communicating Science in a Prosaic Age (1990), Preface, xi-xii.

Scientists wrote beautifully through the 19th century and on into the early 20th. But somewhere after that, coincident with the explosive growth of research, the art of writing science suffered a grave setback, and the stultifying convention descended that the best scientific prose should sound like a non-human author addressing a mechanical reader.

In Boojums All the Way Through: Communicating Science in a Prosaic Age (1990), Preface, xii.