Are the humanistic and scientific approaches different? Scientists can calculate the torsion of a skyscraper at the wing-beat of a bird, or 155 motions of the Moon and 500 smaller ones in addition. They move in academic garb and sing logarithms. They say, The sky is ours, like priests in charge of heaven. We poor humanists cannot even think clearly, or write a sentence without a blunder, commoners of common sense. We never take a step without stumbling; they move solemnly, ever unerringly, never a step back, and carry bell, book, and candle.

Basic research at universities comes in two varieties: research that requires big bucks and research that requires small bucks. Big bucks research is much like government research and in fact usually is government research but done for the government under contract. Like other government research, big bucks academic research is done to understand the nature and structure of the universe or to understand life, which really means that it is either for blowing up the world or extending life, whichever comes first. Again, that's the government's motivation. The universities' motivation for conducting big bucks research is to bring money in to support professors and graduate students and to wax the floors of ivy-covered buildings. While we think they are busy teaching and learning, these folks are mainly doing big bucks basic research for a living, all the while priding themselves on their terrific summer vacations and lack of a dress code.
Smalls bucks research is the sort of thing that requires paper and pencil, and maybe a blackboard, and is aimed primarily at increasing knowledge in areas of study that don't usually attract big bucks - that is, areas that don't extend life or end it, or both. History, political science, and romance languages are typically small bucks areas of basic research. The real purpose of small bucks research to the universities is to provide a means of deciding, by the quality of their small bucks research, which professors in these areas should get tenure.

Bresslers Law: There is no crisis to which academics will not respond with a conference.

As quoted in William Reville, 'The Science of Writing a Good Joke', The Irish Times (5 Jun 2000).

But it is precisely mathematics, and the pure science generally, from which the general educated public and independent students have been debarred, and into which they have only rarely attained more than a very meagre insight. The reason of this is twofold. In the first place, the ascendant and consecutive character of mathematical knowledge renders its results absolutely insusceptible of presentation to persons who are unacquainted with what has gone before, and so necessitates on the part of its devotees a thorough and patient exploration of the field from the very beginning, as distinguished from those sciences which may, so to speak, be begun at the end, and which are consequently cultivated with the greatest zeal. The second reason is that, partly through the exigencies of academic instruction, but mainly through the martinet traditions of antiquity and the influence of mediaeval logic-mongers, the great bulk of the elementary text-books of mathematics have unconsciously assumed a very repellant form,something similar to what is termed in the theory of protective mimicry in biology the terrifying form. And it is mainly to this formidableness and touch-me-not character of exterior, concealing withal a harmless body, that the undue neglect of typical mathematical studies is to be attributed.

During the three years which I spent at Cambridge my time was wasted, as far as the academical studies were concerned. I attempted mathematics,  but I got on very slowly. The work was repugnant to me, chiefly from my not being able to see any meaning in the early steps in algebra. This impatience was very foolish 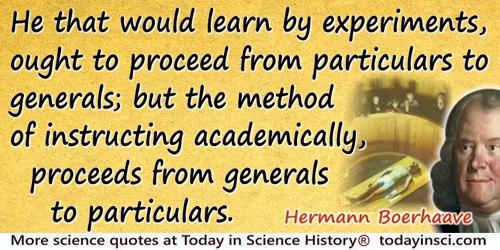 He that would learn by experiments, ought to proceed from particulars to generals; but the method of instructing academically, proceeds from generals to particulars. 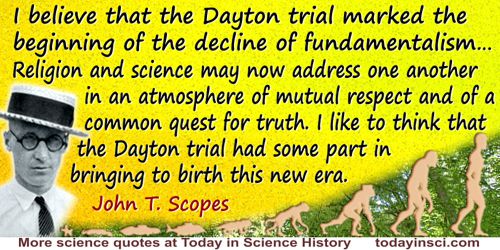 I believe that the Dayton trial marked the beginning of the decline of fundamentalism.  I feel that restrictive legislation on academic freedom is forever a thing of the past, that religion and science may now address one another in an atmosphere of mutual respect and of a common quest for truth. I like to think that the Dayton trial had some part in bringing to birth this new era.

From 'ReflectionsForty Years After', in Jerry R. Tompkins (ed.), D-Days at Dayton: Reflections on the Scopes Trial(1965), 31. As quoted in Stephen Jay Gould, Hens Teeth and Horses Toes: Further Reflections in Natural History (1983), 274.

Speech (7 Feb 2012) in the East Room of the White house. 'Remarks by the President at the White House Science Fair'

In any of the learned professions a vigorous constitution is equal to at least fifty per cent more brain.

Models so constructed, though of no practical value, serve a useful academic function. The oldest problem in economic education is how to exclude the incompetent. The requirement that there be an ability to master difficult models, including ones for which mathematical competence is required, is a highly useful screening device.

Persons, who have a decided mathematical talent, constitute, as it were, a favored class. They bear the same relation to the rest of mankind that those who are academically trained bear to those who are not.

Philosophers no longer write for the intelligent, only for their fellow professionals. The few thousand academic philosophers in the world do not stint themselves: they maintain more than seventy learned journals. But in the handful that cover more than one subdivision of philosophy, any given philosopher can hardly follow more than one or two articles in each issue. This hermetic condition is attributed to technical problems in the subject. Since William James, Russell, and Whitehead, philosophy, like history, has been confiscated by scholarship and locked away from the contamination of general use.

Speaking of libraries: A big open-stack academic or public library is no small pleasure to work in. Youre, say, trying to do a piece on something in Nevada, and you go down to C Floor, deep in the earth, and out to what a miner would call a remote working face. You find 10995.497S just where the card catalog and the online computer thought it would be, but that is only the initial nick. The book you knew about has led you to others you did not know about. To the ceiling the shelves are loaded with books about Nevada. You pull them down, one at a time, and sit on the floor and look them over until you are sitting on a pile five feet high, at which point you are late home for dinner and you get up and walk away. Its an incomparable boon to research, all that; but it is also a reason why there are almost no large open-stack libraries left in the world.

The future generation of scientists will be a sorry lot if the best teachers leave the academic circles for more lucrative positions in military or industrial laboratories.

You would be surprised at the number of academics who say things like I didnt realise what a sponge was until I saw a programme of yours.

[Luis] Alvarez's whole approach to physics was that of an entrepreneur, taking big risks by building large new projects in the hope of large rewards, although his pay was academic rather than financial. He had drawn around him a group of young physicists anxious to try out the exciting ideas he was proposing.