Question: Explain why pipes burst in cold weather.
Answer: People who have not studied acoustics think that Thor bursts the pipes, but we know that is nothing of the kind for Professor Tyndall has burst the mythologies and has taught us that it is the natural behaviour of water (and bismuth) without which all fish would die and the earth be held in an iron grip. (1881)

Genuine student answer* to an Acoustics, Light and Heat paper (1881), Science and Art Department, South Kensington, London, collected by Prof. Oliver Lodge. Quoted in Henry B. Wheatley, Literary Blunders (1893), 186-7, Question 10. (*From a collection in which Answers are not given verbatim et literatim, and some instances may combine several students' blunders.) Webmaster notes that fish would die may refer to being taught that water's greatest density is at 4°C, and sinks below a frozen surface, so bodies of water can remain liquid underneath, to the benefit of the fish. The student was likely taught that bismuth, like water, expands when it freezes.

All frescoes are as high finished as miniatures or enamels, and they are known to be unchangeable; but oil, being a body itself, will drink or absorb very little colour, and changing yellow, and at length brown, destroys every colour it is mixed with, especially every delicate colour. It turns every permanent white to a yellow and brown putty, and has compelled the use of that destroyer of colour, white lead, which, when its protecting oil is evaporated, will become lead again. This is an awful thing to say to oil painters ; they may call it madness, but it is true. All the genuine old little pictures, called cabinet pictures, are in fresco and not in oil. Oil was not used except by blundering ignorance till after Vandykes time ; but the art of fresco painting being lost, oil became a fetter to genius and a dungeon to art.

Are the humanistic and scientific approaches different? Scientists can calculate the torsion of a skyscraper at the wing-beat of a bird, or 155 motions of the Moon and 500 smaller ones in addition. They move in academic garb and sing logarithms. They say, The sky is ours, like priests in charge of heaven. We poor humanists cannot even think clearly, or write a sentence without a blunder, commoners of common sense. We never take a step without stumbling; they move solemnly, ever unerringly, never a step back, and carry bell, book, and candle.

Buffon, who, with all his theoretical ingenuity and extraordinary eloquence, I suspect had little actual information in the science on which he wrote so admirably For instance, he tells us that the cow sheds her horns every two years; a most palpable error. ... It is wonderful that Buffon who lived so much in the country at his noble seat should have fallen into such a blunder I suppose he has confounded the cow with the deer.

Common sense iz instinkt, and instinkt dont make enny blunders mutch, no more than a rat duz, in coming out, or going intew a hole, he hits the hole the fust time, and just fills it.

Does the evolutionary doctrine clash with religious faith? It does not. It is a blunder to mistake the Holy Scriptures for elementary textbooks of astronomy, geology, biology, and anthropology. Only if symbols are construed to mean what they are not intended to mean can there arise imaginary, insoluble conflicts. ... the blunder leads to blasphemy: the Creator is accused of systematic deceitfulness.

For, the great enemy of knowledge is not error, but inertness. All that we want is discussion, and then we are sure to do well, no matter what our blunders may be. One error conflicts with another; each destroys its opponent, and truth is evolved.

I had observed that there were different lines exhibited in the spectra of different metals when ignited in the voltaic arc; and if I had had any reasonable amount of wit I ought to have seen the converse, viz., that by ignition different bodies show in their spectral lines the materials of which they are formed. If that thought had occured to my mind, I should have discovered the spectroscope before Kirchoff; but it didnt.

My World Line (1970). Cited in Edward Robert Harrison, Cosmology: the Science of the Universe (2000), 379, which adds: The Λ force is referred to by various names, such as the cosmological constant, cosmological term, cosmical constant or cosmical term.

Nature gropes and blunders and performs the crudest acts. There is no steady advance upward. There is no design.

As quoted in Bob Fenster, Duh!: The Stupid History of the Human Race (2000) , 208. [No other source was found by Webmaster. If you have information on a primary source, please contact Webmaster.]

Success covers a multitude of blunders.

The advantage is that mathematics is a field in which ones blunders tend to show very clearly and can be corrected or erased with a stroke of the pencil. It is a field which has often been compared with chess, but differs from the latter in that it is only ones best moments that count and not ones worst. A single inattention may lose a chess game, whereas a single successful approach to a problem, among many which have been relegated to the wastebasket, will make a mathematicians reputation.

The best class of scientific mind is the same as the best class of business mind. The great desideratum in either case is to know how much evidence is enough to warrant action. It is as unbusiness-like to want too much evidence before buying or selling as to be content with too little. The same kind of qualities are wanted in either case. The difference is that if the business man makes a mistake, he commonly has to suffer for it, whereas it is rarely that scientific blundering, so long as it is confined to theory, entails loss on the blunderer. On the contrary it very often brings him fame, money and a pension. Hence the business man, if he is a good one, will take greater care not to overdo or underdo things than the scientific man can reasonably be expected to take.

The blunders of a doctor are felt not by himself but by others. 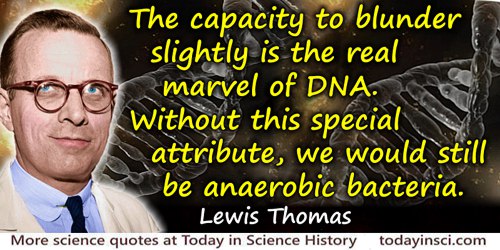 The capacity to blunder slightly is the real marvel of DNA. Without this special attribute, we would still be anaerobic bacteria and there would be no music.

The laboratory work was the province of Dr Searle, an explosive, bearded Nemesis who struck terror into my heart. If one made a blunder one was sent to stand in the corner like a naughty child. He had no patience with the women students. He said they disturbed the magnetic equipment, and more than once I heard him shout Go and take off your corsets! for most girls wore these garments then, and steel was beginning to replace whalebone as a stiffening agent. For all his eccentricities, he gave us excellent training in all types of precise measurement and in the correct handling of data.

In Cecilia Payne-Gaposchkin: An Autobiography and Other Recollections (1996), 116.

There is no spiritual copyright in scientific discoveries, unless they should happen to be quite mistaken. Only in making a blunder does a scientist do something which, conceivably, no one might ever do again.

We can see our forests vanishing, our water-powers going to waste, our soil being carried by floods into the sea; and the end of our coal and our iron is in sight. But our larger wastes of human effort, which go on every day through such of our acts as are blundering, ill-directed, or inefficient,  are less visible, less tangible, and are but vaguely appreciated.

When we no longer look at an organic being as a savage looks at a ship, as something wholly beyond his comprehension; when we regard every production of nature as one which has had a long history; when we contemplate every complex structure and instinct as the summing up of many contrivances, each useful to the possessor, in the same way as any great mechanical invention is the summing up of the labour, the experience, the reason, and even the blunders of numerous workmen; when we thus view each organic being, how far more interesting, I speak from experience, does the study of natural history become!

From the Conclusion of Origin of Species by Means of Natural Selection, Or the Preservation of Favoured Races in the Struggle for Life (3rd. ed., 1861), 521.

Your printers have made but one blunder,
Correct it instanter, and then for the thunder!
Well see in a jiffy if this Mr S[pencer]
Has the ghost of a claim to be thought a good fencer.
To my vision his merits have still seemed to dwindle,
Since I have found him allied with the great Dr T[yndall]
While I have, for my part, grown cockier and cockier,
Since I found an ally in yourself, Mr L[ockyer]
And am always, in consequence, thoroughly willin,
To perform in the pages of Nature's M[acmillan].