Common sense iz instinkt, and instinkt dont make enny blunders mutch, no more than a rat duz, in coming out, or going intew a hole, he hits the hole the fust time, and just fills it. 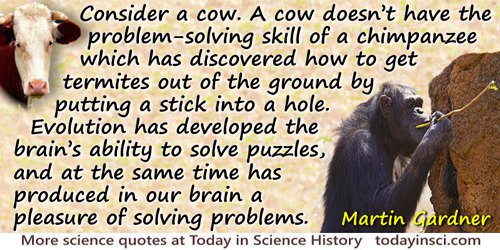 Consider a cow. A cow doesnt have the problem-solving skill of a chimpanzee, which has discovered how to get termites out of the ground by putting a stick into a hole. Evolution has developed the brains ability to solve puzzles, and at the same time has produced in our brain a pleasure of solving problems.

At then-recent symposium of the American Astronomical Society, as stated in Leaflet The Cemter of the Galaxy (1948), No. 230, 254.

Exper. I. I made a small hole in a window-shutter, and covered it with a piece of thick paper, which I perforated with a fine needle. For greater convenience of observation I placed a small looking-glass without the window-shutter, in such a position as to reflect the sun's light, in a direction nearly horizontal, upon the opposite wall, and to cause the cone of diverging light to pass over a table on which were several little screens of card-paper. I brought into the sunbeam a slip of card, about one-thirtieth of an inch in breadth, and observed its shadow, either on the wall or on other cards held at different distances. Besides the fringes of colour on each side of the shadow, the shadow itself was divided by similar parallel fringes, of smaller dimensions, differing in number, according to the distance at which the shadow was observed, but leaving the middle of the shadow always white. Now these fringes were the joint effects of the portions of light passing on each side of the slip of card and inflected, or rather diffracted, into the shadow. For, a little screen being placed a few inches from the card, so as to receive either edge of the shadow on its margin, all the fringes which had before been observed in the shadow on the wall, immediately disappeared, although the light inflected on the other side was allowed to retain its course, and although this light must have undergone any modification that the proximity of the other edge of the slip of card might have been capable of occasioning... Nor was it for want of a sufficient intensity of light that one of the two portions was incapable of producing the fringes alone; for when they were both uninterrupted, the lines appeared, even if the intensity was reduced to one-tenth or one-twentieth.

For terrestrial vertebrates, the climate in the usual meteorological sense of the term would appear to be a reasonable approximation of the conditions of temperature, humidity, radiation, and air movement in which terrestrial vertebrates live. But, in fact, it would be difficult to find any other lay assumption about ecology and natural history which has less general validity.  Most vertebrates are much smaller than man and his domestic animals, and the universe of these small creatures is one of cracks and crevices, holes in logs, dense underbrush, tunnels, and nestsa world where distances are measured in yards rather than miles and where the difference between sunshine and shadow may be the difference between life and death. Actually, climate in the usual sense of the term is little more than a crude index to the physical conditions in which most terrestrial animals live.

From 'Interaction of physiology and behavior under natural conditions', collected in R.I. Bowman (ed.), The Galapagos (1966), 40.

Heres to the crazy ones. The misfits. The rebels. The troublemakers. The round heads in the square holes. The ones who see things differently. Theyre not fond of rules. You can quote them. Disagree with them. Glorify or vilify them. But the only thing you cant do is ignore them. Because they change things. They push the human race forward. And while some may see them as the crazy ones, we see genius. Because the people who are crazy enough to think they can change the world, are the ones who do.

In Apple Computer newspaper advertisement (1997) as quoted and cited in Tad Lathrop and Jim Pettigrew, This Business of Music Marketing and Promotion (1999), 55.

One should drill the hole where the board is thickest.

Scientists often invent words to fill the holes in their understanding.These words are meant as conveniences until real understanding can be found.  Words such as dimension and field and infinity  are not descriptions of reality, yet we accept them as such because everyone is sure someone else knows what the words mean.

Shoe leather epidemiology.
[Langmuir stressed that investigators go into the field to collect their own data and directly view the locale of a public health problem. His graduates wore lapel pins of a shoe with a hole in the sole.]

The Humorless Person: I have a friend who has about as much sense of humor as the wooden Indian of commerce. Some time ago he made a trip through the Mammoth Cave of Kentucky.  He did his sight-seeing very thoroughly. He didnt miss a single ramification in that great crack in the face of Mother Nature.  I asked him what he thought of the Mammoth Cave. Well, said he, taking it as a hole, it is all right.

The secular world is full of holes. We have secularized badly.

[S]uppose you make a hole in an ordinary evacuated electric light bulb and allow the air molecules to pass in at the rate of 1,000,000 a second, the bulb will become full of air in approximately 100,000,000 years.

As quoted in Theodore Levitt, The Marketing Imagination (1983, 1986), 128. The quote is sometimes attributed to Theodore Levitt, who popularized it. If you know biographical information about Leo McGinneva, please contact Webmaster.