Ac astronomye is an hard thyng,
And yvel for to knowe;
Geometrie and geomesie,
So gynful of speche,
Who so thynketh werche with tho two
Thryveth ful late,
For sorcerie is the sovereyn book
That to tho sciences bilongeth.
Now, astronomy is a difficult discipline, and the devil to learn;
And geometry and geomancy have confusing terminology:
If you wish to work in these two, you will not succeed quickly.
For sorcery is the chief study that these sciences entail.

A quarter-horse jockey learns to think of a twenty-second race as if it were occurring across twenty minutesin distinct parts, spaced in his consciousness. Each nuance of the ride comes to him as he builds his race. If you can do the opposite with deep time, living in it and thinking in it until the large numbers settle into place, you can sense how swiftly the initial earth packed itself together, how swiftly continents have assembled and come apart, how far and rapidly continents travel, how quickly mountains rise and how quickly they disintegrate and disappear.

An increase in knowledge acquired too quickly and with too little participation on ones own part is not very fruitful: erudition can produce foliage without bearing fruit.

For mining I cannot say much good except that its operations are generally short-lived. The extractable wealth is taken and the shafts, the tailings, and the ruins left, and in a dry country such as the American West the wounds men make in the earth do not quickly heal.

How quickly do we grow accustomed to wonders. I am reminded of the Isaac Asimov story Nightfall, about the planet where the stars were visible only once in a thousand years. So awesome was the sight that it drove men mad. We who can see the stars every night glance up casually at the cosmos and then quickly down again, searching for a Dairy Queen.

I do not mind if you think slowly. But I do object when you publish more quickly than you think.

As quoted, without citation, in William H. Cropper, Great Physicists: The Life and Times of Leading Physicists from Galileo to Hawking (2001), 257.

It is possible in quantum mechanics to sneak quickly across a region which is illegal energetically.

Its amazing how quickly nature consumes human places after we turn our backs on them. Life is a hungry thing. 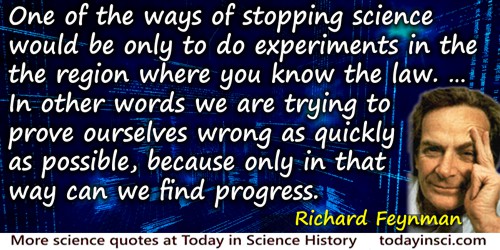 One of the ways of stopping science would be only to do experiments in the region where you know the law.  In other words we are trying to prove ourselves wrong as quickly as possible, because only in that way can we find progress.

She has the sort of body you go to see in marble. She has golden hair. Quickly, deftly, she reaches with both hands behind her back and unclasps her top. Setting it on her lap, she swivels ninety degrees to face the towboat square. Shoulders back, cheeks high, she holds her pose without retreat. In her ample presentation there is defiance of gravity. There is no angle of repose. She is a siren and these are her songs.

What nature does blindly, slowly and ruthlessly, man may do providently, quickly and kindly.

Wheelers First Moral Principle: Never make a calculation until you know the answer. Make an estimate before every calculation, try a simple physical argument (symmetry! invariance! conservation!) before every derivation, guess the answer to every paradox and puzzle. Courage: No one else needs to know what the guess is. Therefore make it quickly, by instinct. A right guess reinforces this instinct. A wrong guess brings the refreshment of surprise. In either case life as a spacetime expert, however long, is more fun!

Women decide the larger questions of life correctly and quickly, not because they are lucky guessers, not because they practise a magic inherited from savagery, but simply and solely because they have sense. They see at a glance what most men could not see with searchlights and telescopes.

Your enemy is never a villain in his own eyes. Keep this in mind; it may offer a way to make him your friend. If not, you can kill him without hateand quickly.