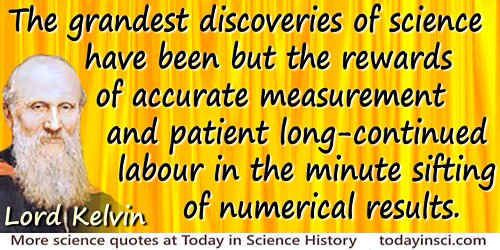 Accurate and minute measurement seems to the non-scientific imagination, a less lofty and dignified work than looking for something new. But nearly all the grandest discoveries of science have been but the rewards of accurate measurement and patient long-continued labour in the minute sifting of numerical results.

I have enjoyed the trees and scenery of Kentucky exceedingly. How shall I ever tell of the miles and miles of beauty that have been flowing into me in such measure? These lofty curving ranks of lobing, swelling hills, these concealed valleys of fathomless verdure, and these lordly trees with the nursing sunlight glancing in their leaves upon the outlines of the magnificent masses of shade embosomed among their wide branchesthese are cut into my memory to go with me forever.

Letter, written among the hills of Bear Creek, seven miles southeast of Burkesville, Kentucky (Sep 1867). In John Muir and William Frederick Badé (Ed.), A Thousand-Mile Walk to the Gulf (1916), xix. This was by far Muir's longest botanical excursion made in his earlier years.

Mathematics may, like poetry or music, promote and sustain a lofty habit of mind.

Men have called me mad; but the question is not yet settled, whether madness is or is not the loftiest intelligencewhether much that is gloriouswhether all that is profounddoes not spring from disease of thoughtfrom moods of mind exalted at the expense of the general intellect.

Not in the ground of need, not in bent and painful toil, but in the deep-centred play-instinct of the world, in the joyous mood of the eternal Being, which is always young, science has her origin and root; and her spirit, which is the spirit of genius in moments of elevation, is but a sublimated form of play, the austere and lofty analogue of the kitten playing with the entangled skein or of the eaglet sporting with the mountain winds.

The ancients had a taste, let us say rather a passion, for the marvellous, which caused  grouping together the lofty deeds of a great number of heroes, whose names they have not even deigned to preserve, and investing the single personage of Hercules with them.  In our own time the public delight in blending fable with history. In every career of life, in the pursuit of science especially, they enjoy a pleasure in creating Herculeses.

In François Arago, trans. by William Henry Smyth, Baden Powell and Robert Grant, 'Fourier', Biographies of Distinguished Scientific Men (1859), Vol. 1, 408. This comment indicates that a single scientist or inventor may be held as the exemplar, such as James Watt and the steam-engine, although groundwork was laid by predecessors.

The mathematical giant [Gauss], who from his lofty heights embraces in one view the stars and the abysses 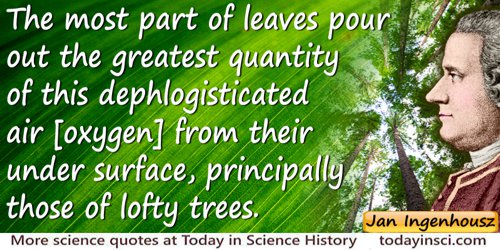 The most part of leaves pour out the greatest quantity of this dephlogisticated air [oxygen] from their under surface, principally those of lofty trees.

What is mathematics? What is it for? What are mathematicians doing nowadays? Wasn't it all finished long ago? How many new numbers can you invent anyway? Is todays mathematics just a matter of huge calculations, with the mathematician as a kind of zookeeper, making sure the precious computers are fed and watered? If its not, what is it other than the incomprehensible outpourings of superpowered brainboxes with their heads in the clouds and their feet dangling from the lofty balconies of their ivory towers?
Mathematics is all of these, and none. Mostly, its just different. Its not what you expect it to be, you turn your back for a moment and it's changed. It's certainly not just a fixed body of knowledge, its growth is not confined to inventing new numbers, and its hidden tendrils pervade every aspect of modern life.

Opening paragraphs of 'Preface', From Here to Infinity (1996), vii.